There’s an odd behavior going around in Windows 10 where users notice a brief Microsoft Office popup window being launched regularly. The pop-up only stays on screen for a brief second after it’s spawned, then immediately closes again. This confused users into believing they’re dealing with a malware threat. 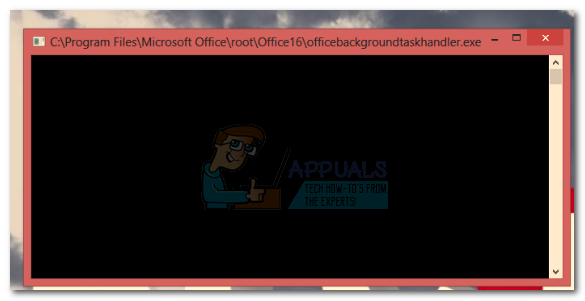 It’s certainly reassuring that we’re not dealing with a malware infection, but this pop-up has the potential to ruin some of your evenings. A lot of users have reported that whenever this pop-up appears, they immediately get thrown out of any fullscreen application that they are running at that moment. As you can imagine, this is not something you’ll want to happen when playing games or watching a movie.

This particular issue has been consistently reported by Windows 10 users since April 15th, 2017. Microsoft has already issued several hotfixes for this issue, but some users are still struggling with this problem. Fortunately, there are plenty of other ways that you can use to solve this issue without having to uninstall your whole Office suite.

If you’re currently struggling with this issue, use one of the methods below. Ideally, start with the first method and work your way down until you encounter a fix that works for you.

Microsoft was certainly quick in issuing a hotfix for this particular issue, but it doesn’t help everyone struggling with the issue. From their point of view, the issue is fixed starting with build 16.0.8201.2025.

As of know, the update is only available for those participating in the Office Insiders Slow program. Even more, some users struggling with this issue have reported that the problem is still not fixed even after updating to the above-specified build.

If you’re on Build 8201.2075 or above, go about your regular business and see if the pop-ups start appearing. If you’re still seeing the officebackgroundtaskhandler.exe pop-ups, follow one of the methods below.

If you enroled in the Office Insiders program, you might be in for a quick fix. Changing the deployment method of the Insider builds might just eliminate the problem for you. Although it’s unclear why this affects the behavior of officebackgroundtaskhandler.exe, some users have eliminated the issue indefiently just changing the Insider ring. You don’t need to set it to a particular update channel – any change in the Insider deployment method seems to work.

Note: Choosing a different Insider program will change the way you receive the latest available builds for all Microsoft products enrolled in the program. Depending on the update channel, you might receive updates with features that are currently in development. For more information about the various update channels, consult this link (here).

Follow the guide down below to change the deployment method of Insider builds:

The most popular fix for this issue is to disable officebackgroundtaskhandler from Task Scheduler. While this method has helped a lot of users eliminate the pop-up, the solution might only be temporary. However, this method will not expose your system to potential security risks.

Some have reported that the random pop-ups have returned a week or so after following the steps below. As it turns out, the disabled tasked might get overridden when you update Office to a new build, triggering the same behavior.

Note: If you’re looking for a permanent solution, skip this method and follow Method 4, Method 5 or Method 6.

Follow the guide below to disable the OfficeBackgroundTaskHandlerRegistration tas from Task Scheduler:

This method seems to have a more permanent effect. It involves changing the user group policy of the culprit task to System. This reportedly hides the popup window from spawning without disabling the OfficeBackgroundTaskHandlerRegistration task. Here’s a quick guide on how to do this:

Note: This method and the one below will enhance the elevation privilege of this particular task, which can lead to some system vulnerabilities in relation to some security threats. If you’re not comfortable with this, jump straight to Method 6.

That’s it. The random pop-ups caused by officebackgroundtaskhandler.exe should now be resolved.

Another way to go around solving this issue is to run officebackgroundtaskhandler.exe as administrator. This is confirmed to prevent the random pop-ups from showing up, but there are also some security concerns related to this fix.

Windows has a history of being vulnerable to privilege elevation attacks. Because of this, only follow the steps below if the first three methods above have not been applicable to your situation. Here’s how to run officebackgroundtaskhandler.exe as administrator:

That’s it. The Office Background Task Handler executable should now be prevented from opening random pop-ups.

If all of the above methods have failed, there’s one little program that is guaranteed to remove the annoying Office pop-ups. This method involves using an open source program called DestroyWindows10spying to remove the Office Telemetry components.

Note: DestroyWindows10spying is not known to cause any underlying problems with Office, but use it at your own risk. Although it’s extremely lightweight, the program has pretty powerful features. It’s strongly recommended that you don’t use it for anything else than what’s featured in the steps below.