It’s a terminal app, so you’ll need to be working from a command line. Hold down Ctrl, Alt and T to open a graphical one. You might also wish to search for the word terminal on the Ubuntu Dash or click on the Applications menu, point to System Tools and click on Terminal. You won’t have to run any of this as the root user, so your normal user account will work perfectly fine.

At the prompt, type the word sensors and push enter. You’ll receive a quick readout of the overall temperature of your CPU as well as the temperature of the individual cores. Note that more than likely, the information begins with the phrase acpitz-virtual-0 when you don’t have any device by that name attached to your system. This throws off many users who’ve never used the sensors app to check computer temperature before. 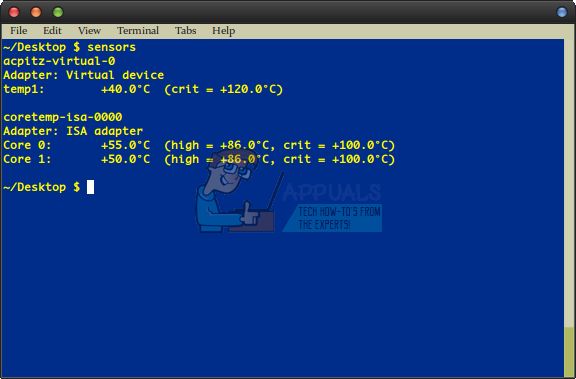 This is the first ACPI thermal zone sensor output device that the Linux kernel detected. It’s basically a name for the thermometer that gives you the output you’re looking for, so you can safely ignore it. If you have additional sensors installed, then you might see more of these which you may again ignore without any repercussion.

What you’ll want to look at is the line next to any of the core labels. Assuming you have a dual-core system, then you’ll have one line that reads Core 0 and another that reads Core 1. Since computer counting systems begin with the number 0, Core 0 is actually the first CPU core you have and Core 1 is the second. Quad-core systems and greater will have further cores listed on their own separate lines. You may see a whole list of them if you’re either running some sort of server or, alternatively, if you’re a hardcore gamer who has some sort of top of the line PC.

The first number, following a single + symbol, is the current temperature. You’ll then be given the highest temperature recorded during the session as well as the critical threshold for when your CPU would be getting far too hot. All this information comes at the cost of only a single word at the command line. It genuinely is that easy to check computer temperature. It couldn’t be any simpler than that, and you may not want to use any graphical tools again after giving this a try. While you may not be a fan of the terminal at the moment, at least give this command a try. It’s a good deal easier than using any graphical alternative.

Linux coders in countries that use the Fahrenheit scale often prefer to use this temperature scale for measuring CPU heat as well. Fortunately, the sensors app allows you to switch to Fahrenheit without you needing to do any conversions yourself. Type sensors -f and push enter to have the same exact output as the original command you gave but with all of the temperatures written out in Fahrenheit. 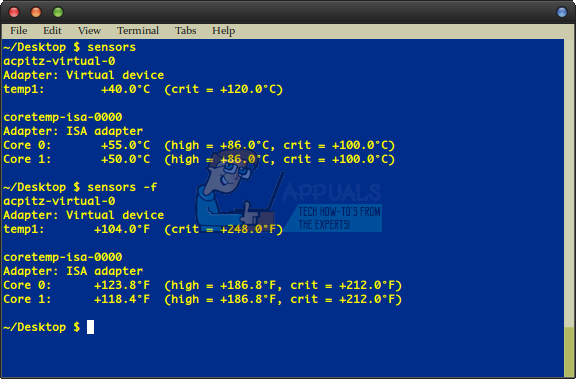 Since you’ve switched the output to Fahrenheit, you’ll notice that the high and critical values have changed as well. This gives you the ability to check the current temperature against them in this scale without doing any complicated math. Considering that it only requires one additional option, you can consider this command one of the easiest as well

By the way, you’ll want to make sure that the temperature never does get above the critical threshold. If you find that your machine is consistently running too hot, then you’ll want to prevent unnecessary services from starting up. Clean out dust from all the fan holes and make sure that all the fans are spinning correctly. Never put laptops or ultrabooks on soft surfaces like a comforter that can get them clogged up. You’ll never want to run it in sunlight either. If you’re someone into hardcore gaming or multimedia work who overclocked their CPU, then you may wish to undo this as well to reduce some pressure if sensors keeps showing a lot of excess heat.