The Samsung Galaxy Note 4 is an older model in the Galaxy Note series, having been released in October 2014, but due to being a high-end premium device in its day it still holds up against modern mid-range devices. It packs 3GB of RAM, a 16MP camera, a 32GB ROM, and can be upgraded to Marshmallow – so despite being 3 years old, it’s still quite an amazing device, with a ton of customization support from 3rd party developers.

Upgrading or even changing your regional firmware is done quite simply through Odin, and I’ll walk you through it. This guide applies to whether you’re upgrading your firmware, or changing to an entirely different region altogether – for example, if you have the firmware and want to change to SM-N910T.

Note: It’s an extremely good idea to have a backup of your current ROM incase something goes wrong. If your phone does not like the new firmware, for example, you can simply try flashing your old firmware and data.

First thing is to download and extract Odin on your computer, then install the Samsung USB drivers.

Now go to SamMobile, which hosts pretty much every available Samsung firmware, and download the Galaxy Note 4 firmware of your choice. You can either download the latest firmware for your region, or try a different region altogether.

The only thing to be aware of is your CPU type – the Galaxy Note 4 came with either an Exynos or Snapdragon processor, depending on the region. It’s an extremely bad idea to flash SM-N910U (Exynos) firmware onto a SM-N910T (Snapdragon) device. So figure out which processor you have using an app like CPU-Z, and if you’re changing the regional firmware, make sure you download firmware for the same processor type.

So with Odin, USB drivers, and the firmware of your choice on your PC, go ahead and launch Odin. Now shut off your phone, and hold Power+Volume Down+Home to boot into Download Mode. Now you can connect your Galaxy Note 4 to your PC via USB. 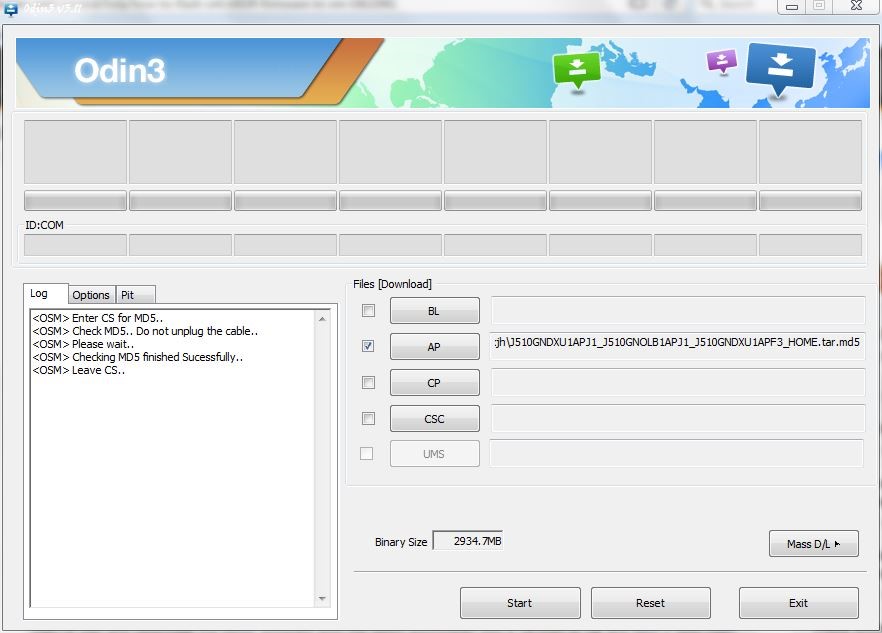 Now in Odin, click on the AP button and choose the .tar.md5 file from the firmware you downloaded. Make sure “re-partition” is not checked, and click the START button.

After a few moments, the firmware should be flashed successfully, with a green “PASS” message in Odin.

Some firmwares have bootloaders that do not allow you to downgrade firmware versions. So you cannot, for example, go from N910F 6.0.1 to N910F 5.1.1. What you could do in such a situation is create your own MD5 file with a 6.0.1 bootloader inside a firmware for 5.1.1, but that is beyond the scope of this guide.