The 0x80240017 error typically appears after a failed update performed by WU (Windows Update) or after a failed installation of Visual C++ Redistributable Packages for Visual Studio. In some rare cases, the issue might also be produced by a 3rd party antivirus conflict. 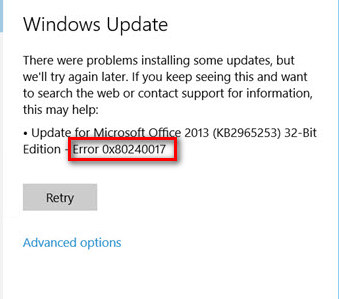 Update: This issue is also reported to occur with certain printer drivers that fail to update via Windows Update.

If you’re currently encountering this particular issue, the methods below might help. We have managed to identify quite a few potential fixes that other users in a similar situation have used to resolve the issue. Please follow each potential fix in order until you discover a fix that resolves the 0x80240017 error on your machine.

Note: Before you follow any of the potential fixes below, please make sure that the issue is not caused by a 3rd party antivirus conflict. To test this theory, either disable the real-time protection of your external antivirus or uninstall it from your system temporarily.

Although the built-in Windows Update troubleshooter is notoriously known for being unhelpful, several users have confirmed that the utility has managed to actually fix the 0x80240017 error.

Here’s a quick guide to opening the Windows Update Troubleshooter and using it to fix the 0x80240017 error:

Once the process is complete, attempt to perform the update/installation again and see if the 0x80240017 error has been resolved. If you’re still seeing the same symptoms, continue with Method 2.

Given the fact that this is primarily a Windows Update issue, it can typically be resolved by resetting the WU (Windows Update) components manually. From all the methods featured in this guide, this method had the highest degree of success in resolving the 0x80240017 error for other users encountering the same problem.

This method involves using an elevated command prompt to manually reset the Windows update components. Although it will require you to get quite technical, we offer guidance every step of the way. Here’s what you need to do:

If you’re still encountering the same issue, move over to Method 3.

Some users have reported that the 0x80240017 error might also occur whenever Windows Update fails to update a printer driver. This is quite a common occurrence with Canon and HP printers. Whenever this happens, a similar message will be displayed inside the Windows Update screen:

If you’re also encountering the 0x80240017 error due to a bad printer driver installation, the fix is quite simple. Most users encountering this particular scenario managed to solve the problem by manually installing the latest version of the driver. Here’s a quick guide to doing this:

If this method wasn’t successful or wasn’t applicable, move down to Method 4.

Method 4: Running an SFC scan and a DISM command

As some users have pointed out, the 0x80240017 error might also happen due to some underlying system file corruption. To test this theory, let’s use a Microsoft-developed tool to scan your system for any corruption occurrences and fix them.

System File Checker (SFC) is a built-in Windows tool that scans for corrupted system files that might be causing corruption-related issues. If any inconsistencies are found during this scan, the utility will automatically replace the corrupted files with new and healthy ones.

Here’s a quick guide to triggering an SFC scan with the hopes of fixing the 0x80240017 error.

Note: If these first steps don’t produce results, follow the steps directly below to deploy the DISM.

Once you’re computer boots back up, see whether the  0x80240017 error has been addressed. If you’re still seeing the same issues, proceed with the next steps of deploying the DISM.

The Deployment Image Servicing and Management (DISM) is yet another command-line utility capable of fixing system file corruption. Opposite to the SFC scan that uses a local backup to replace the corrupted files, DISM uses a WU component to download healty files from the internet. With this in mind, make sure your internet connection is stable before starting following the  steps below: