Fall Creators Update 1709 brought along numerous features for Windows users with enhanced connectivity and additional functionalities. A lot of already broken modules were fixed and released as well. However, users started to see problems with the VPN module when the update was released.

The users were unable to open the in-built VPN application at all or the module was not connecting successfully. This problem usually occurs because of software problems as well as bad internet connectivity.

We can try adding a key to the registry “PolicyAgent”. If this method doesn’t work, you can always undo the changes in a reverse manner. Do note that the registry editor is a powerful tool and creating/editing keys that you don’t know about can hamper your computer and make it unusable. 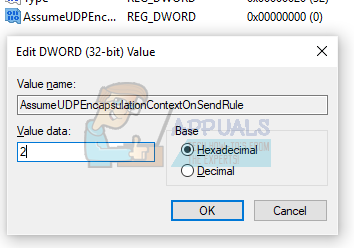 After an in-place upgrade (from 1703 to 1709), many users reported that their VPN client started working abnormally or refused to work at all. After a lot of complaints, Microsoft officially acknowledged the problem and released a statement that you might have to reinstall the VPN package altogether. This was particularly targeted at CMAK (Connection Manager Administration Kit) VPN’s.

It is recommended that you uninstall the Cisco VPN client before proceeding with the update. This way repairing the client will be much easier as compared to not installing it before the update. Refer to the following steps on how to properly install and make the client functional.

Note: Appuals has no affiliations with any third-party software documented in this article. All the software is mentioned purely for the ease of access of the users. Perform all tasks at your own risk.

You can easily check this by right-clicking on “This PC” and selecting properties. Once in properties, look beneath the “System” heading and check your system type.

Note: If you encounter an error that these exe files cannot run on this operating system, simply extract the exe file using WinRAR (or any similar program) and run the .msi file.

After the latest 1709 update, PPTP works as expected but L2TP is giving problems. This can be easily resolved by contacting your system/company administrator and asking them to allow PPTP protocol along with L2TP. This can be easily achieved by using the in-built RAS feature present on Windows 2012 R2 servers. This problem is mostly faced by people when they are trying to connect to their work while not being physically present.

Fix: VPN not working after 1709 Update