Taskeng.exe is a process known as Task Scheduler Engine and is signed by Microsoft Corporation. The original taskeng.exe is an important system file, which makes it a high target for malware. It’s responsible for keeping track of tasks that are set to run at a predetermined time and call upon them when necessary.

A lot of users have reported that a Taskeng.exe window pops up every once in a while. Depending on the circumstances, users will sometimes see an empty Taskend.exe window or a short message telling that a certain executable could not be found. 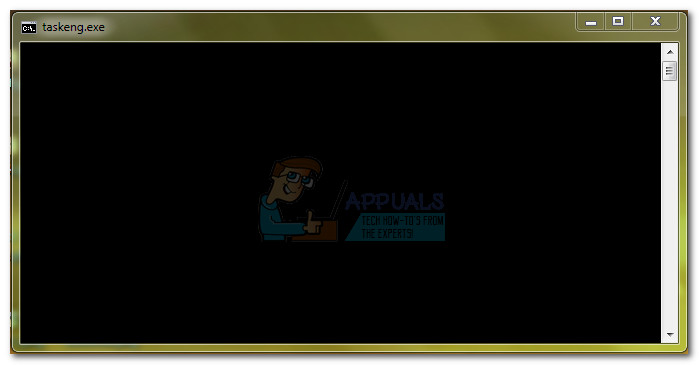 There are a lot of potential causes that will trigger this taskeng.exe error. Here’s a quick rundown of the most common occurrences:

Like every other system file with enhanced permissions, taskeng.exe is the perfect disguise target for malicious programs created by cybercriminals. While the random pop up can very well be a pre-defined process scheduled to run automatically, it can also be a sign of a virus infection.

The Taskeng executable is associated with a lot of errors, but the most culprits are MyWebSearch (a nasty browser hijacker) and RocketTab. Both programs are bundled with Trovi Download Manager and a few other ad-supporting programs that thrive on illegitimate practices. Although there’s a lot of malware confirmed to target taskeng.exe, the modus operandi is always the same – once the malicious file finds its way on your computer, it will immediately attack the Windows Run and RunOnce keys. As security experts have explained, there are some registry values in those keys that are set to run the taskeng.exe error at start-up or at fixed intervals.

Most of the time, the virus will inject ad pop-ups and other advertisements while trying to stay under the security radar. However, there are more aggressive versions of this malware type that will perform one or more of the following activities:

How to Determine if Taskeng.exe is a Virus?

Perhaps the biggest giveaway that the taskeng.exe is actually infected is the error message. If you see a blank taskeng.exe popup accompanied by an error message similar to “Windows cannot find *executable file”, there’s a high chance that you’re dealing with a virus infection. You can be even more sure of this if you see any mention of RocketTab, GeniusBox or MyWebSearch in the error message.

If you see a similar message to the one above, there’s one more verification to make before you determine that you’re dealing with a virus infection – The legitimate taskeng.exe process is located in:

You can identify if this is the case by opening Task Manager ( Ctrl + Shift + Esc) and going to the Processes tab. Once there, locate taskeng.exe and check the Command Line associated with it or right-click on it and choose Open File Location.

If the path is something else than C:\Windows\System32, you just identified the source of your malware infection. In this case, move straight to Method 3 to get rid of the virus.

Below you have a collection of methods that have successfully helped users struggling with random taskeng.exe popups to get rid of the issues. Follow Method 1 and Method 2 if you previously determined that the location of the process taskeng.exe process is in C:\Windows\System32.

In the event that this method didn’t resolve your issue, follow the method below.

Some users encountering this particular issue traced the odd behavior to Microsoft Office; There’s a Get Office icon that auto-installs and can end up causing this problem.

Method 3: Scan your System with Malwarebytes

If you previously determined that you’re dealing with malware, let’s take the appropriate measures to get rid of the infection. You could do this in a number of ways, but given the fact that the infection can spread to other system files, deleting taskeng.exe is not really applicable. Instead, it’s recommended to run a system-wide scan with a powerful antivirus suite.

Most security products are capable of dealing with an infection such as this, but users have also reported false positives related to this issue. To minimize this risk, let’s use a solution that has been used successfully by most users dealing with this problem. 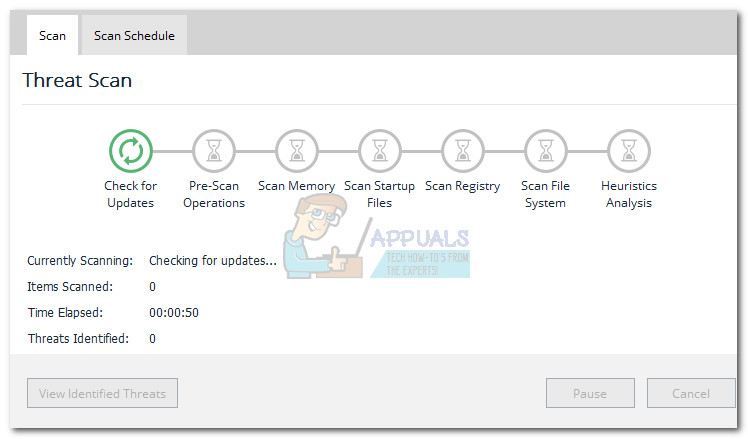 Malwarebytes is not only effective in dealing with trojans and viruses, it’s undoubtedly the best security software when it comes to removing adware and browser hijackers. Download the latest free version of Malwarebytes from this official link (here) and run the installer. Once the security is installed, open Malwarebytes and hit the Scan Now button.

Once the scan is complete, the threats will be automatically quarantined. Upon the next restart, Windows will automatically recreate taskeng.exe and every other system file that was affected by the infection.

If none of the methods shown above have helped you at all, we suggest you check the tasks you are suspicious about and remove them from the Task Scheduler. To remove the tasks, follow the steps below:-