Google Nexus 7 was, in its prime years, the ultimate compact tablet. Made possible by a collaboration between Google and Asus, it was the pure Android experience that many users craved.

But the early days of Android weren’t as reliable as we might like to remember. Nexus 7 tablets and virtually any other Android-powered device had issues that we deem totally unacceptable today.

Setting the spec-related shortcomings aside, the biggest flaw with Nexus 7 is that sometimes it refuses to turn up – especially if you allowed the battery to drain completely or you didn’t use it for an extended period of time. Another frequent problem is the dreadful boot-loop error in which the device will be stuck in a continuous attempt to boot up.

Google admitted there’s a slight manufacturing flaw with the batteries on Nexus 7 as they are incredibly hard to jump-start again after they have been totally drained. This is a common occurrence on both the original Nexus 7 and the 2013 reiteration.

Unfortunately, the battery is not the only potential culprit that can make your device to stop powering on. Before we get to more advanced topics, let’s eliminate some suspects first:

Asus has a serious design fault with this particular model. Since the battery compartment is slightly bigger than the battery itself, any sudden movement has the potential of pulling the connector out and cut power to your device. If the icon and flash symbol are implying the device is charging but the charge stays at 0% no matter how long you leave it charging, this will most likely fix your issue. 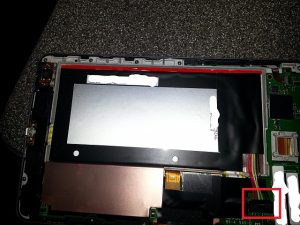 Here’s what you need to do:

Note:  If you don’t want this problem to repeat, you can use any type of silicone rubber to fill the extra battery space in order to prevent it to from moving around.

Method 2: Do a soft reset

If you managed to leave your Nexus 7 battery to discharge completely, you may need to do a soft reset in order to signal that your battery has no juice left. As I’ve said above, it’s a manufacturing flaw. Although this should fix the issue immediately, it doesn’t always work on a first try.

You can perform a soft reset by holding the power button for a full 30 seconds while it is plugged into a power outlet. The device should then restart and display a battery icon signaling it’s charging. Let it charge for at least an hour before turning it on again.
Note: If holding the power button doesn’t do anything at first, try repeating the procedure and hold it for a longer period of time.

Method 3: Power OFF your device manually

If method two hasn’t yielded any results, let’s try performing a hard power off from within recovery mode. Here’s what you need to do:

If a Nexus 7 device is discharged to the point where it won’t power up again, it might trigger a black screen error. If you have this problem, your device won’t power on and the battery icon won’t show on the screen when the charger is plugged in.

However, if you hold down the power button for 30 seconds, you can see a faint backlight visible at the edge of the screen. It will only be visible if you are in a dark room.

If that’s the case, here’s what you need to do to fix your Nexus 7 tablet:

If your Nexus 7 tablet is charging normally but you are stuck on the boot screen, it might mean you need to delete the temporary data stored in the partition cache.

Here’s how to clear it out:

If you still can’t get your device to boot up, but it is now charging normally, doing a device reset might restore its previous functionalities.

Warning: This will erase all your data from the device, so proceed carefully. It will also take some time to complete, thus it’s a good idea to make sure it’s fully charged or plugged into a power source. Here’s what you need to do:

I genuinely hope one of the methods above fixed your issue. If none of them were successful, your device might suffer from a hardware failure, in which case you need to take it to a service.