Some users have been reporting the Explorer.exe element not found error when trying to open Microsoft Edge or Microsoft Store apps. This problem usually occurs after the user upgrades from an older Windows version to Windows 10. 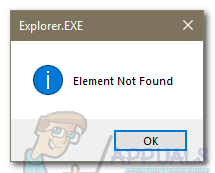 If you’re currently struggling with this issue, we have managed to identify a few potential fixes that have enabled users in a similar situation to resolve the issue. Please follow each method in order and skip each potential fix that is not applicable to your situation. Let’s begin.

Most users encountering this issue are on Lenovo desktops or laptops. If you’re in the same situation, the issue is likely caused by a built-in Lenovo feature (One Key Theatre).

Note: This method is only applicable if you’re encountering this issue on Lenovo hardware. If you have a different PC / laptop manufacturer, you won’t be able to follow the steps described below.

OneKey Theatre is a utility the watches for the OneKey to be pressed and adjusts the display and audio settings to presets. As it turns out, the software is conflicting with a Windows component as one of its processes is listening for the keypress.

If you have it on your system, you can easily uninstall the OneKey Theater software. To do this, open a Run window (Windows key + R), type “appwiz.cpl” and hit Enter. Once you gain entry to the Programs and Features screen, right click on OneKey Theater and choose Uninstall.

If this hasn’t resolved your issue or if it’s not applicable, move down to the method below.

Another popular fix that has enabled users to fix the Explorer.exe element not found error is to restart the File Explorer service in Task Manager. To make the entire process clearer, here’s a guide through the whole thing:

If the issue is still not resolved, move down to the final method.

Some users that were dealing with the Explorer.exe element not found error managed to resolve the issue by uninstalling the most recent Windows updates. As it turned out, this resolved the issue for some users indefinitely (even after WU automatically re-applied the updates.

Here’s a quick guide to uninstalling the most recent Windows updates:

If you’re still struggling with the same issue, move down to the final method.

If all the methods above have been unsuccessful, this is your last resort. Some users have been only able to resolve the issue after performing a Windows reset. Unlike re-installing your OS, going for a reset will not require you to insert the installation media. Even more, you will be able to keep your personal files like images, videos, and several user settings.

If you decide to go through with it, consult our in-depth article about resetting Windows (reset windows 10).