Some users have been reaching out to us after seeing the “Close programs to prevent information loss” error message. Although the message might seem to suggest a shortage of RAM memory, it’s actually signaling that the system is running out of virtual memory – the paging file (pagefile.sys) is not large enough, or the system is not permitted to automatically adjust the size of the paging file. 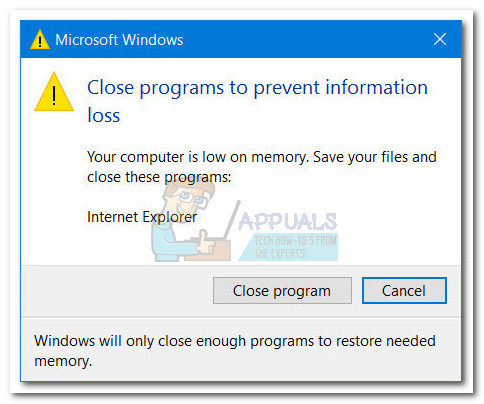 Note: This particular error is usually encountered on Windows 10 (since it’s the most resource demanding), but you can stumble upon slightly different variations of this error on older Windows versions. Some users have reported that the issue is not exclusive to when the computer is performing demanding tasks, but it’s also occurring when the computer is idle.

Whenever this error surfaces, you’ll experience some performance hiccups that will complement the apparition of this error message. You should also start noticing that the programs currently opened are responding slowly or become totally unresponsive after a short while.

Why is this error occurring?

As you probably know, the Random Access Memory (RAM) serves as the computer’s working memory. It allows your PC to handle more information at the same time, which boosts the overall performance.

However, whenever your system runs out of RAM, Windows is forced to make use of virtual memory – it moves the least used data blocks to a hidden file named pagefile.sys (also referred to as paging file or swap file). It does this in order to free up some RAM for more pressing matters. Whenever this information is needed again, your OS will sacrifice other data blocks in order to read the previously moved information back in. This process is very efficient in allowing modern computers to prioritize the usage of RAM and speed up various operations.

Note: Keep in mind the paging file (pagefile.sys) does not have a dedicated hardware component – Windows will use hard disk space to accommodate virtual memory.

If your operating system is unable to enlarge or modify paging file to accommodate the new data blocks that are scheduled to arrive from RAM, you will be prompted with the “Close programs to prevent information loss” error. This can happen for one of two reasons – either Windows is not configured to automatically manage the paging file size or it doesn’t have enough disk space on the hard drive to expand the paging file size.

How to fix the “Close Programs to Prevent Information Loss” error

If you’re currently struggling with this issue, your first stop should be under System Properties. The vast majority of users are facing this issue because they have previously modified the Virtual Memory settings.

Although there are some legitimate reasons for adjusting the size of the paging file, Windows is by far the best manager for it – unless you have some kind issue that requires you to set a custom size for your swap file (paging file). Letting Windows to automatically manage the paging file size will allow it to adjust the size dynamically on an on-demand basis.

Follow the steps down below to access System Properties and allow Windows to automatically manage the paging file size:

After the next startup, stress your PC as much as possible and see if the “Close programs to prevent information loss” error returns. If it does, clear more space on your OS drive, so that your system has enough free space to expand the paging file.

Also, if you have the means, consider adding an additional RAM stick. Or even better, buy a larger, more powerful dual channel RAM kit. This will make it less probable that your OS will run out of RAM memory and consequently be forced to use virtual memory.