Some users have been reporting problems with a few variations of the Broadcom Netxtreme 57xx Gigabit Controller driver. Since this driver is essentially a network adapter, users encountering this issue are left with no internet connection. This particular issue seems to be contained within Windows 10 and is only reported to occur with just a few versions of the Netxtreme Controller driver. When this particular issue is encountered, Device Manager will show a “the device cannot start (Code 10)” error associated with the Broadcom Controller driver. 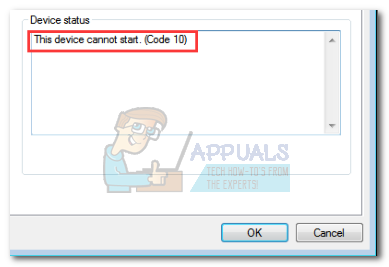 From what we gathered, Microsoft has addressed this issue a couple of times until now. You might find that some of the Broadcom Netxtreme drivers that were previously regarded as incompatible with Windows 10 are now working without issues.

What is a Broadcom Netxtreme controller?

For a number of years now, Broadcom NetXtreme controllers are one of the most popular choices for Gbe (Gigabit Ethernet) controllers. Essentially, the Broadcom Netxtreme controller nothing more than an Ethernet network adapter. You’ll likely find this driver installed on business desktops, but it’s also used on notebooks, workstations, and even servers.

If you’re currently struggling with this issue, we bring good news. We managed to identify a few verified solutions that have enabled users in a similar situation such as you to resolve the issue. Please follow the methods below in order until you encounter a fix that resolves your situation. If the first method is not applicable to your scenario, jump straight to Method 2.


Note: If you don’t have another device from which to download the necessary drivers and a flash drive to migrate the software, skip straight to Method 3.

Since Microsoft and the other involved parties have already addressed a lot of incompatibilities discovered after the launch of Windows 10, downloading and installing the latest driver version for Broadcom Netxtreme 57xx Gigabit Controller will most likely resume your internet connection. As of now, version 17.2.0.0 is the latest iteration of the Broadcom NetXtreme 57xx Gigabit Lan Driver.

However, you’ll need another device from which to download the required drivers and a flash stick or other media to move the driver to the affected machine. If you have the means, access this link (here) from another device with a working internet connection and download the latest Broadcom Netxtreme 57xx Gigabit Controller driver. Make sure to download a version appropriate to your Windows bit version.

Once the driver is downloaded, use a flash drive to move the installer to the affected machine. Then, open the installer and follow the on-screen prompts to update your Broadcom Netxtreme controller. Keep in mind that the changes won’t be visible until the system is rebooted. With this in mind, restart your computer and see if the issue has been resolved. If you’re still having the same problem, move to the method below.

Method 2: Downgrade to an older version

Some users that have been struggling with this particular issue have managed to fix it by downgrading to an older Netxtreme 57xx Gigabit Controller driver version. While the results are fairly mixed, it seems like version (14.2.0.5) is widely accepted as a stable driver. Keep in mind that this driver was originally intended for Windows 7, but a lot of users have confirmed that it works for Windows 10.

Since this driver version is outdated, it’s no longer available to download on Broadcom’s website. Luckily, we managed to identify another location that is safe to download. Follow the steps down below to downgrade the Netxtreme 57xx Gigabit Controller driver to an older driver version.

Note: Similar to the method above, you’ll need to have a different device to download the driver since the connection on the affected machine will not work.

On a device with a valid internet connection, visit this link (here) and download the Broadcom Netxtreme 57xx Gigabit Controller driver associated with your Windows bit version. Notice how there are 3 versions of the 14.2.0.5. Ignore the Windows XP version and download one of the two Windows 7 versions.

Next, move the installer to the affected machine. Open it and it should automatically ask you whether you want to overwrite the newer driver with an older version. Hit Yes, wait for the installation to complete, then reboot your computer and see if the issue has been resolved.

Method 3: Installing one of the local drivers

If the above methods have failed or where not applicable, you can also install one of the local drivers. This will not require another device to download it or a working internet connection since the drivers are already located on your OS drive. Here’s a quick guide to installing a driver from the local cache for the Broadcom Netxtreme 57xx Gigabit Controller: