Windows 10 was made available as a Technical Preview by Microsoft in 2014. Microsoft had to put real effort to make it eye catching and on the other hand, performance was also a major concern. So, there were a number of bugs which had to be diminished completely from the OS to make it clean. Microsoft announced various builds of Windows 10 technical preview. Every build was announced after fixing some bugs in the previous build.

Almost every user faced a problem i.e. Mail, Calendar and People apps are not working in Windows 10. The Windows 10 was announced early this year. Calendar, Mail and people apps are one of the widely used Windows Store apps in Windows 10. So, the users who rely on these apps can’t bear this issue as it is pretty annoying to have your essential apps broken.

Reason behind the Problem Mail, Calendar and People apps not working in Windows 10

The reason behind this particular issue is already clarified by Microsoft. According to Microsoft, it is relevant to licensing issue with Store beta. As Mail, Calendar and People apps are Windows Store apps in general, so, this issue can be specifically related to Windows store. Windows Store licenses each app installed on the PC. When there is an issue with licensing, then, this can lead towards Windows apps broken.

Solutions to Fix the Problem Mail, Calendar and People apps not working in Windows 10:

There is a proper fix to get rid of this issue in Windows 10. All you need to do is to follow along the methods described below.

PowerShell is a very handy command line application inside Windows 10. You can fix the problem using this application. Just follow the steps below.

1. Open PowerShell by searching for it using After it is displayed in the search results, right click over it and select Run as administrator.

Note: It is important to open it as administrator; otherwise, you might get an error. 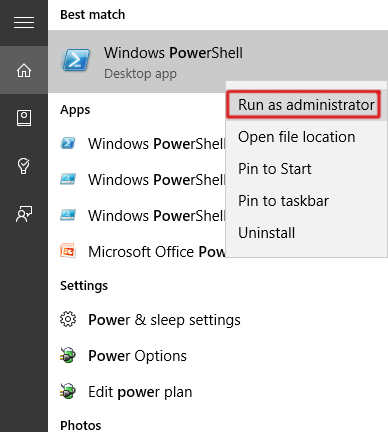 2. Inside the PowerShell, Type /Paste the following command as described below. Hit the Enter key afterwards to let it be executed.

After the apps are installed, run them again to see if they work.

This problem can be resolved by resetting the Windows Store Caches using the Command Prompt.

2. Type the following command i.e. exe inside the command prompt and hit Enter key to execute. It would clear the caches of Windows store. After it is done, re-check the applications to see if they work or not.

Fix: Calendar and People Apps not working in Windows 10