Racing is the go-to genre for most casual gamers looking for a fun evening. However, some racing games are designed to exclusively to satisfy hardcore gamers who are craving a racing experience as close to reality as possible. When it comes to racing, the gaming scene is split into two subgenres: arcade and simulation. Some games try to accommodate both types of players, but very few titles manage to do it well.

Regardless of which side you are, the best place to play racing games is on PS4. In terms of games, PS4 has the most titles and a fair amount of exclusive games that can’t be found on another platform. Even more, the console supports a wide array of wheels that will take the experience to another level.

If you’re looking for a solid racing experience for your PS4, look no further. We have put together a list with the most successful racing titles currently available. It doesn’t matter if you’re into arcade racers or simulators, you’ll certainly find something you’ll wish to play below. 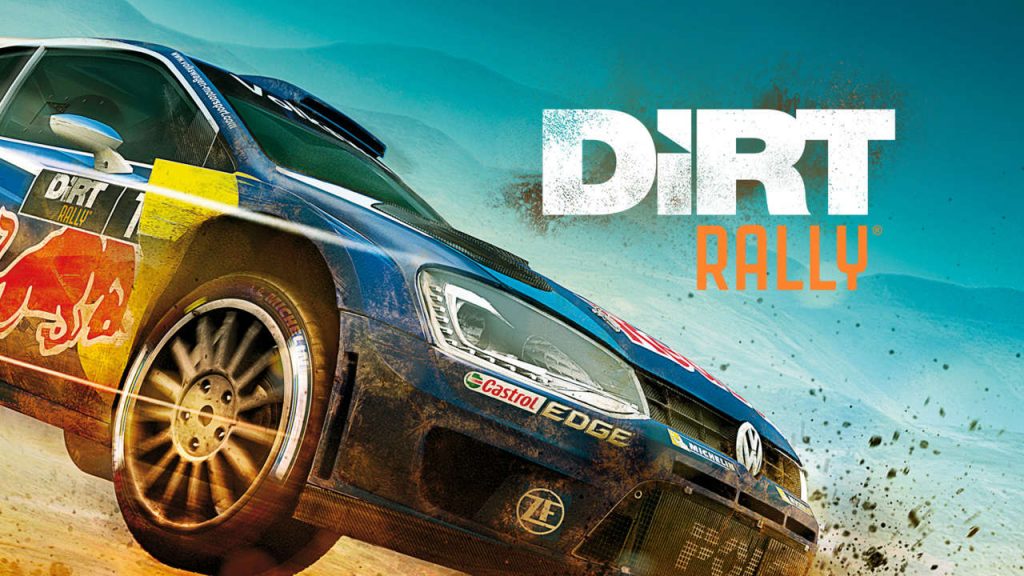 Codemasters are, well, masters at creating racing masterpieces. Dirt Rally features 40+ of the most relevant off-road cars from the incipient days of racing to the modern era. You have over 70 different stages to race on, most of them with iconic scenery that will stick in your memory long after you’re done with the game.

In terms of the actual racing experience, the game is outstanding. The cars are very responsive and there’s no lag or framerate drop. Somehow the developers have managed to build a racing simulator fairly accessible for total noobs like me. But what really stands out in this game is the physics system. 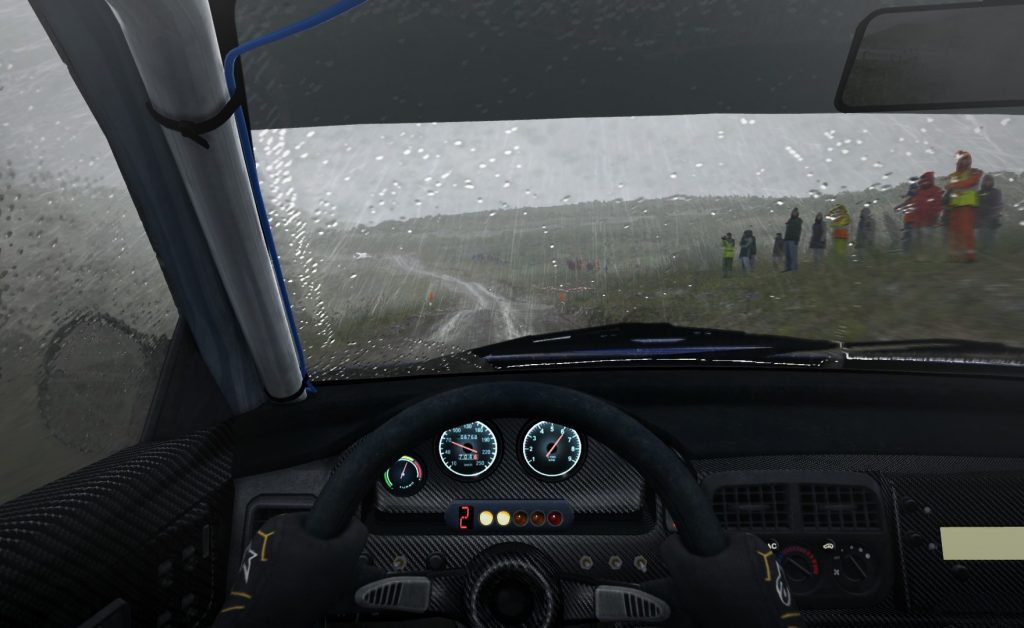 Soon enough, you’ll realize that cars behave differently depending on the surface you’re racing on. In order to win, you’ll need to adapt your racing style to gravel, snow or asphalt if you don’t want to end in a ditch. Dirt rally is not the easiest racing game out there, but it’s so rewarding once you get the hang of it. 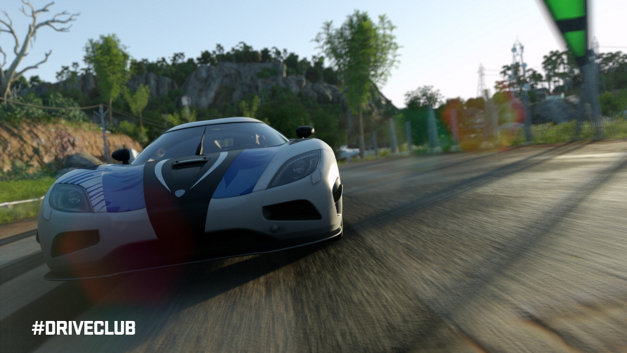 Driveclub was created with the next-generation of gamers in mind. You will build up your driver reputation on various racing events around the world. Driveclub stands out with a variety of race modes and a whole plethora of customising options. Even more, the game has a weather system and a day-night mode that will make you play each race multiple times.

For the most part, the game manages to blend the complexity of realistic simulation with the inviting mechanics of arcade racers. Make no mistake, the game is a lot better now than it was at launch. After a few updates, the framerate is way better and the addition of bikes give Driveclub a whole new feeling. 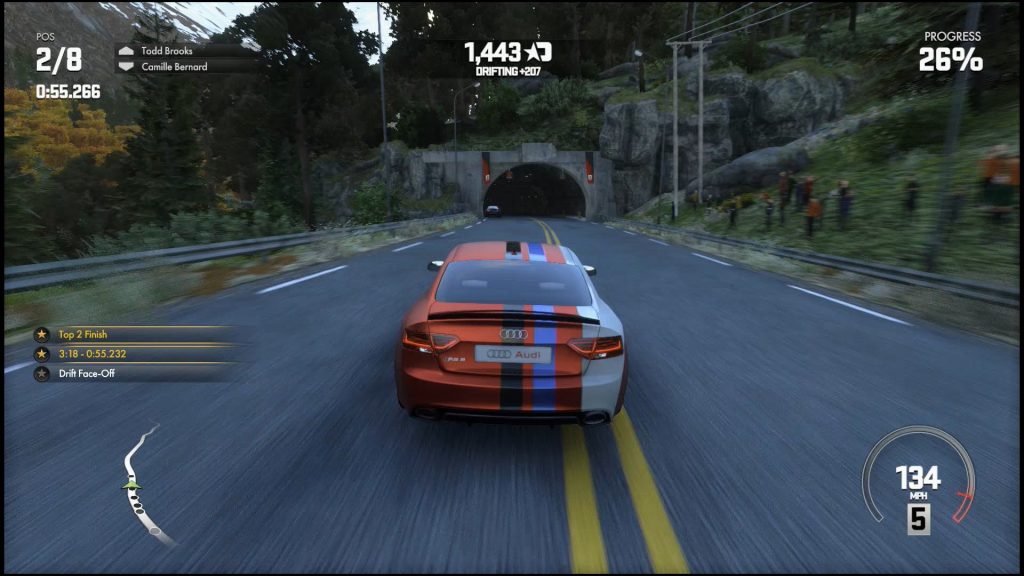 Even though DriveClub is one of the best-selling PlayStation 4 games, the inconsistent AI keeps it from being an instant classic. If you decide to buy it, you should know it also has a VR version. If you own a VR headset, this racing game should be a priority. 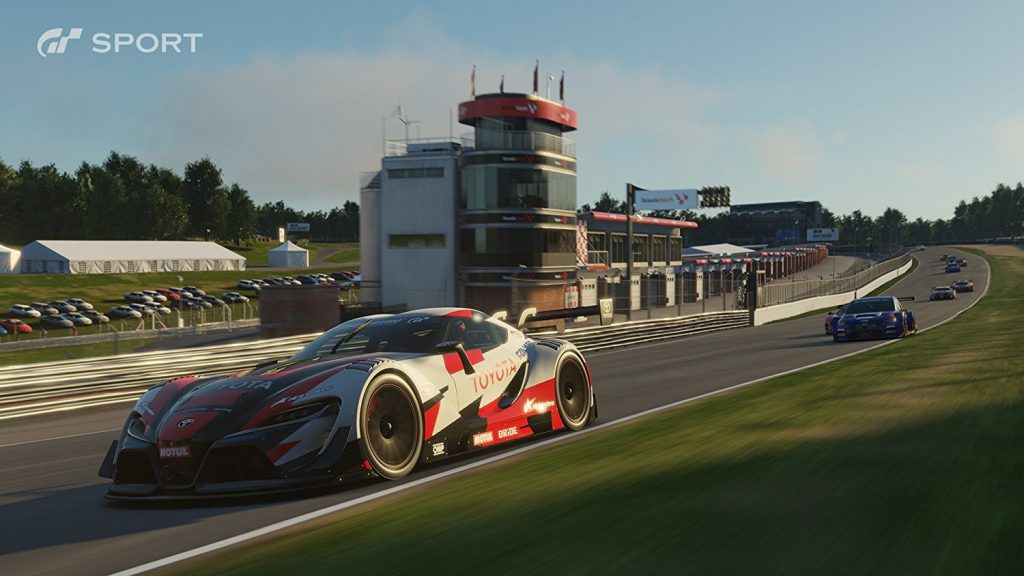 Gran Turismo Sport wants to accommodate all racing game players. With this in mind, the game includes three different modes: Campaign, Sports mode, and Arcade mode. Even more, you can opt to play exclusively offline or online if you want to.

Unlike previous Gran Turismo games, this title doesn’t have a dynamic weather system and a day-night cycle. However, you have the option of modifying the time of day before starting the race. The good news is you have 177 cars to choose from and 27 different race setups. 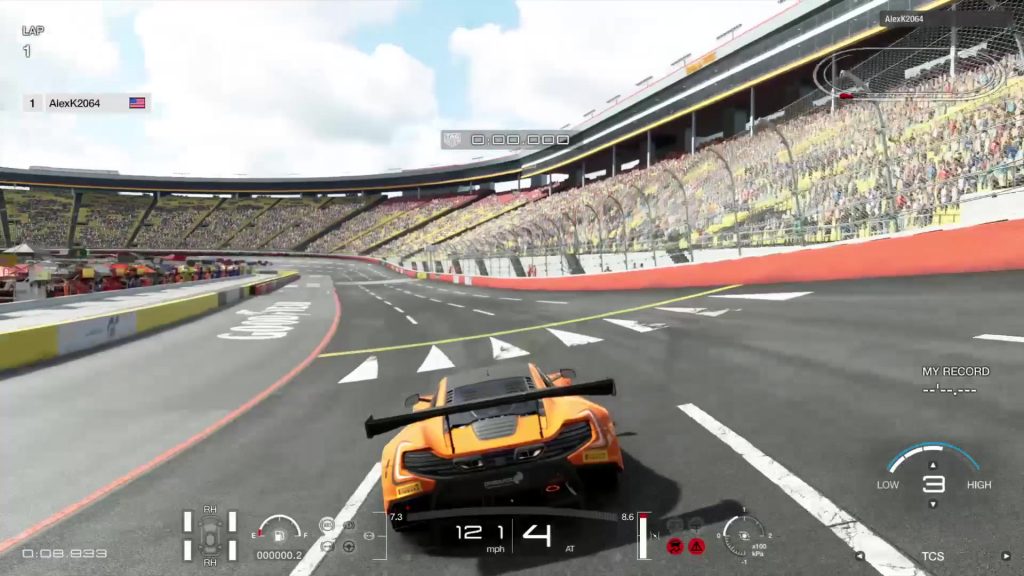 Gran Turismo Sport is fully compatible with PlayStation VR, but the VR mode is limited to a special Tour mode. If you’re into racing tournaments and eSports events, you shouldn’t look past Gran Turismo Sport. The game features various online events that have regional finals with real prizes. 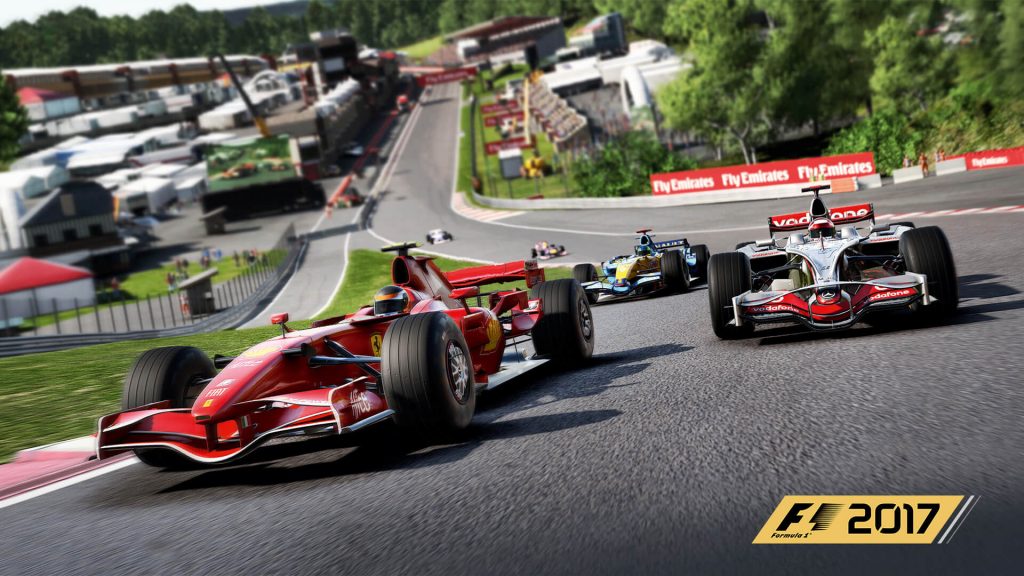 F1 2017 is the ninth installment of the Formula One video game franchise. As usual, the game includes all twenty circuits with twenty drivers from ten teams competing for the grand title.

Aside from the actual racing, the players will have to deal with an expanded team management mode. You will be responsible for the research and development of car parts, and for making sure you don’t exceed the quota of components. 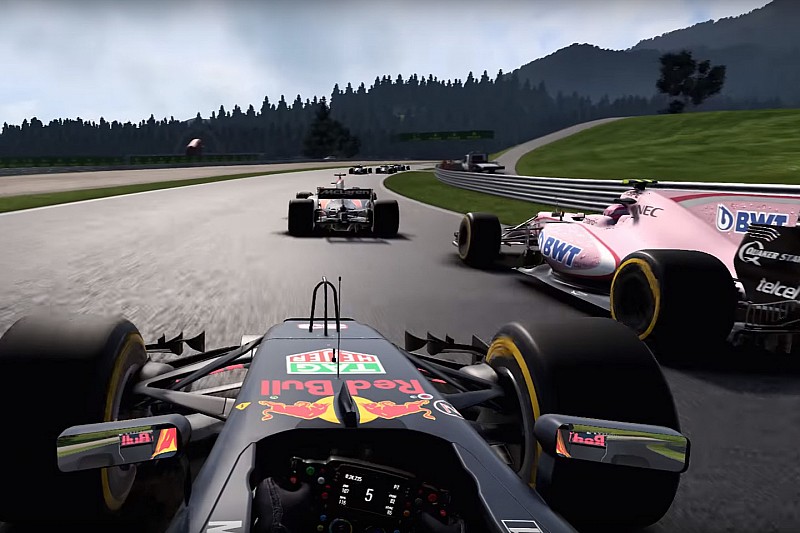 If you’re into F1 racing, you shouldn’t miss this iteration. Most reviews are positive and the overall perception is that the developers have managed to add a lot of depth to an already solid racing franchise. 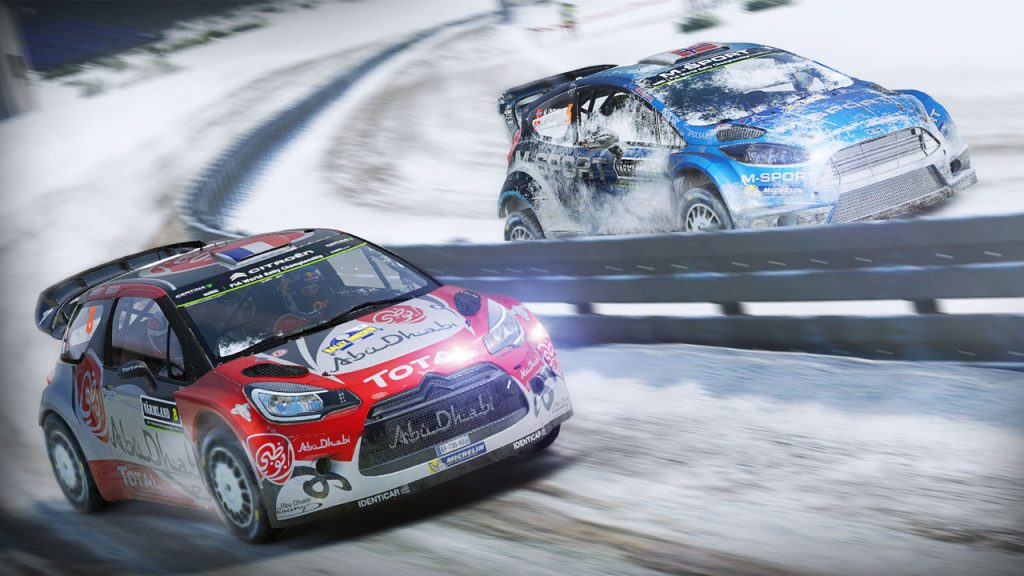 If you’re a big fan of the World Rally Championship, you should definitely play WRC 6. The game is based on the 2016 season of WRC, with fully licensed teams, cars, and drivers.

For the most part, the critics agree on one thing. WRC 6 isn’t better than Dirt Rally, but it gets really close. With a robust career mode and an approachable handling model, WRC 6 will definitely keep you busy. The graphics are good for the most part, but some areas of the game are less than pretty. 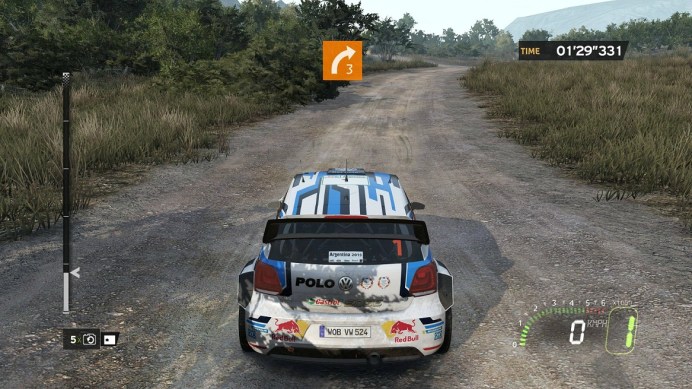 If you’re looking for a game that captures the spirit of a niche motorsport series, you should seriously consider WRC 6. The car selection is fairly limited, but the game compensates with an enhanced level of realism and excitement. 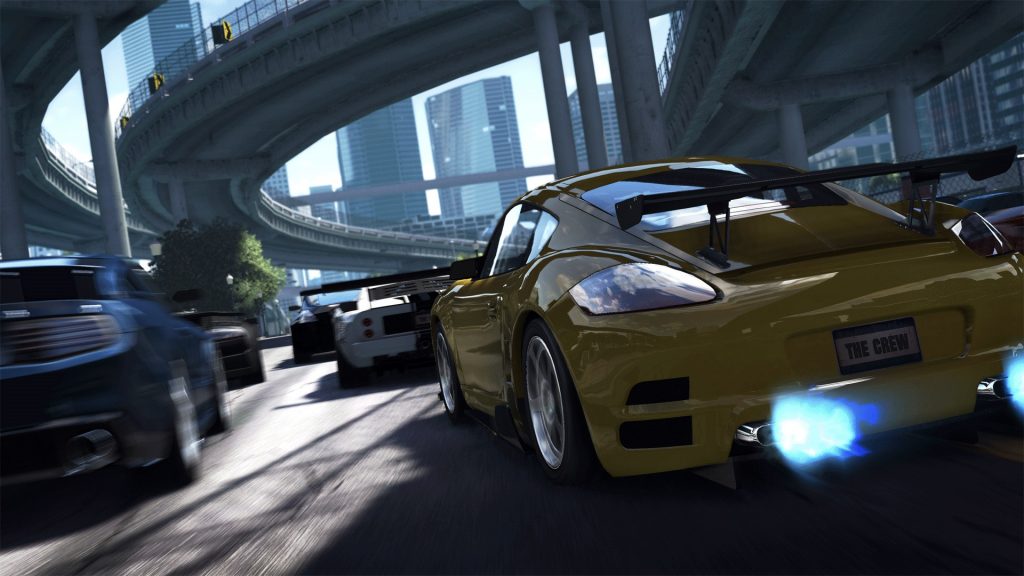 The Crew is an online-only arcade-style racing game. The story takes place in an open world environment that covers a scaled-down recreation of the US. The map is split into 5 different regions, each with unique landscapes and features.

You can expect the single-player campaign to last for about 20 hours. You will infiltrate a criminal group and help in taking it down. Throughout the campaign, you’ll  need to complete a series of mini-games that are triggered when you drive through a certain area. All missions can be played alone, with a local friend or with the help of a co-op matchmaking algorithm. 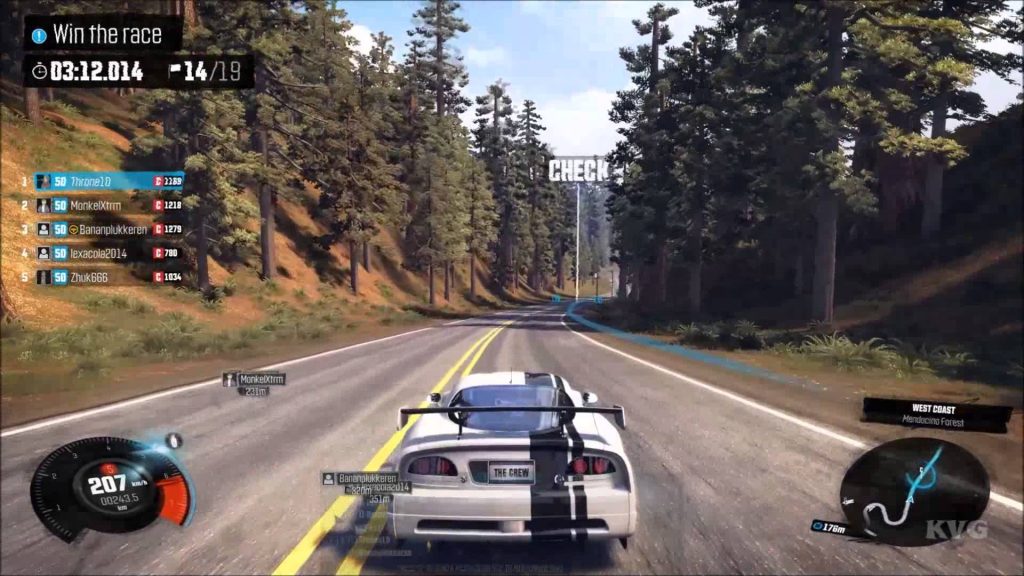 The game received mixed released upon release, mainly because of the online-only concept. The decision to force players to be connected to the internet when playing this game spawned a lot of technical glitches that brings the overall experience down. However, if you’re a big fan of street racing, you should definitely pick up The Crew. 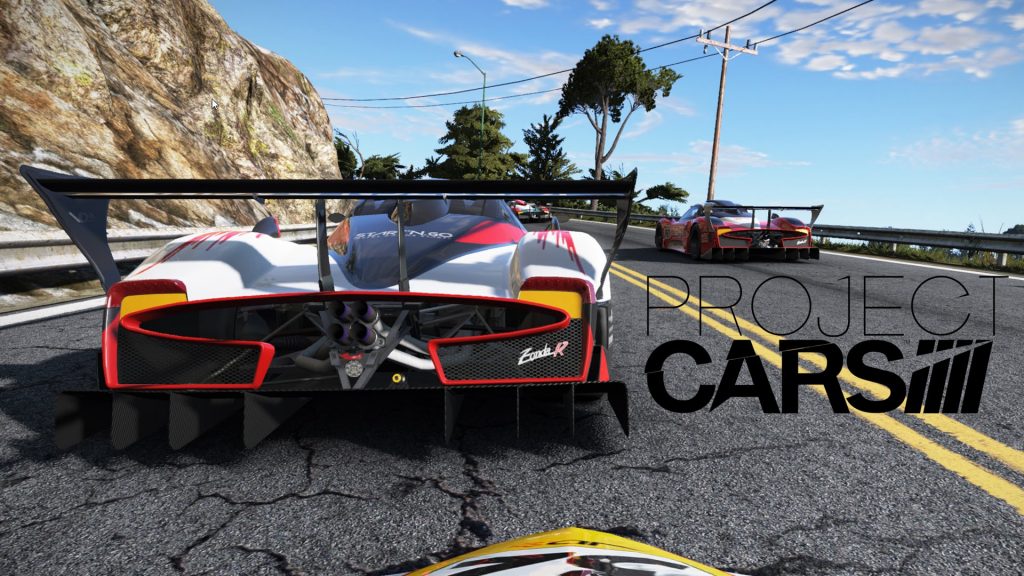 Project Cars features 74 drivable cars and over 110 courses in more than 30 unique location. Make no mistake, this game is built to represent a realistic driving simulation. If you play arcade racers exclusively, you might find the game mechanics of Project Cars a little too demanding.

The game has a sandbox approach that allows players to choose between various motorsport careers. Immediately after you choose a path, you are granted access to all the tracks and vehicles. Instead of grinding for new cars and circuits, you’ll walk in the steps of a real motorsport driver. This means that you’ll do test runs and qualifying stages before you get to the actual race. 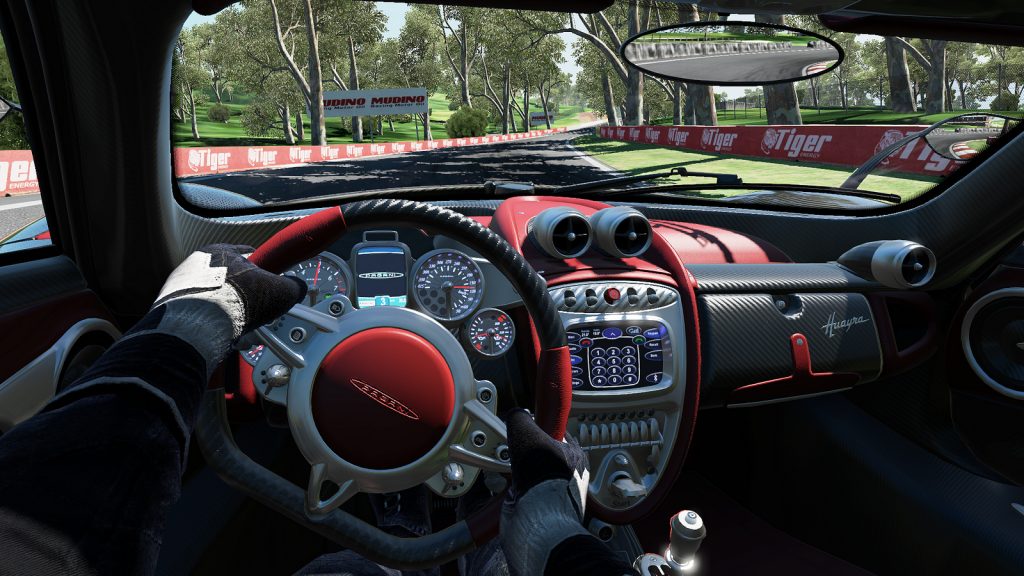 Project Cars is a solid competitor for more established franchises like Forza Motorsport or Gran Turismo. But the fact that it does things its own way makes up for a whole new experience. 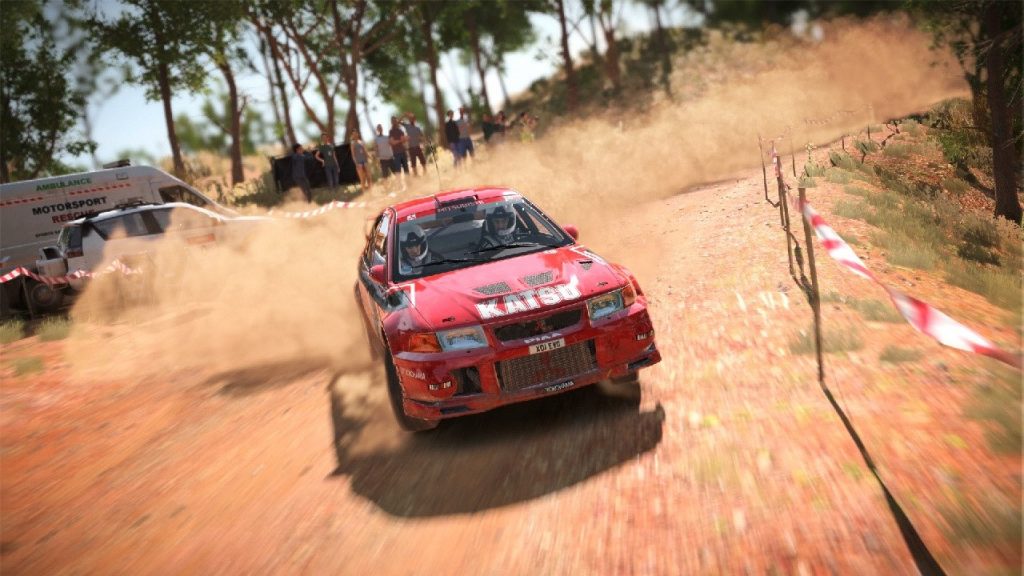 Dirt 4 revolves around rallying, in every form available. Prepare to complete various timed stage events on everything from tarmac to rocky mountain paths. This game will take you through 5 real locations, all featuring a dynamic weather cycle.

The car selection is hand-picked from various time periods, but for the most part, there’s a little bit for everyone. Keep in mind that this game doesn’t feature any cars of elements associated with WRC. But it makes up for it with a solid multiplayer experience and cross-platform leaderboards. 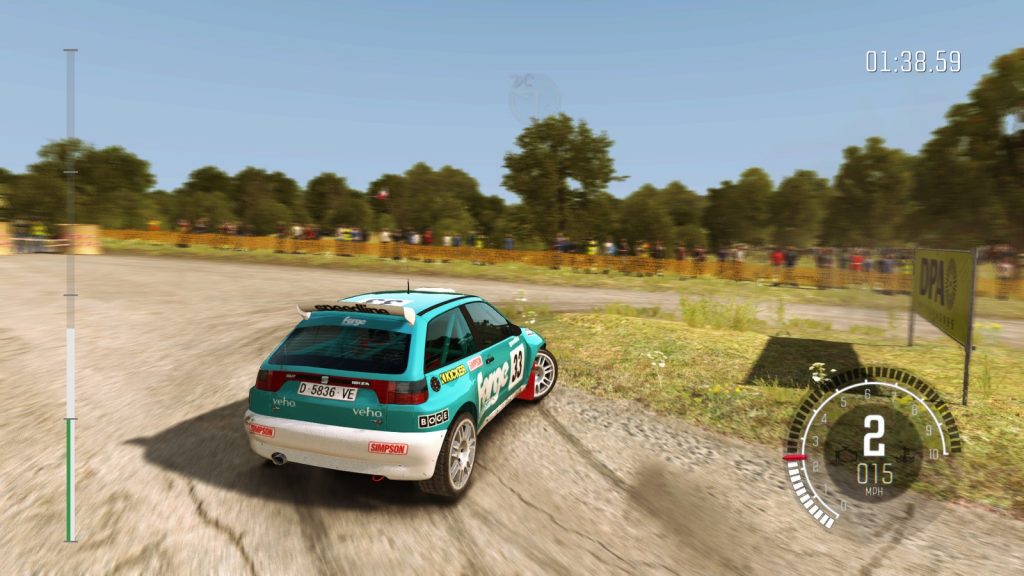 Similar to the concepts introduced in Grid Autosport, you’ll need to spend a part of your earnings on hiring personnel to repair your car. Even more, you’ll need to secure sponsors and oversee the day-to-day operations. If you’re looking for a complete rallying experience, look no further than Dirt 4. 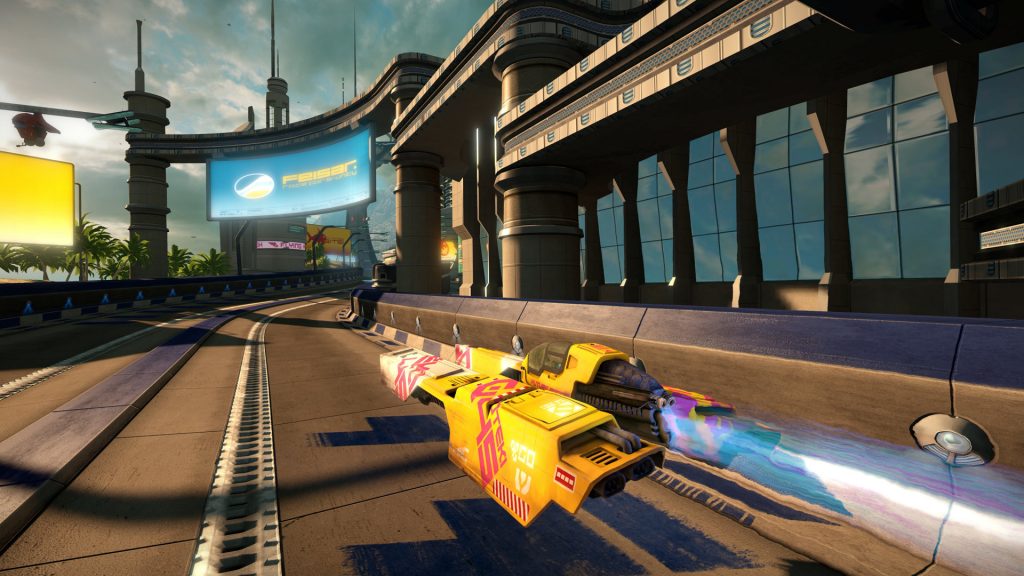 Wipeout: Omega Collection is a remaster of the previous two Wipeout titles. Players will control anti-gravity vehicles owned by various racing corporations. Each vehicle has its own particularities – some excel in handling, others have a bigger shield, while others reach a higher maximum speed.

I was in love with this game as a kid, so I was extremely happy to see it making a comeback. The graphics look awesome and if you have a PS4 Pro, get ready for some 4K quality racing. If you want to win races in Wipeout, you need to be aware of several things at once. In addition to hunting accelerator pads and watching out for abrupt corners, you need to keep an eye on your competitors as they can easily run you over. 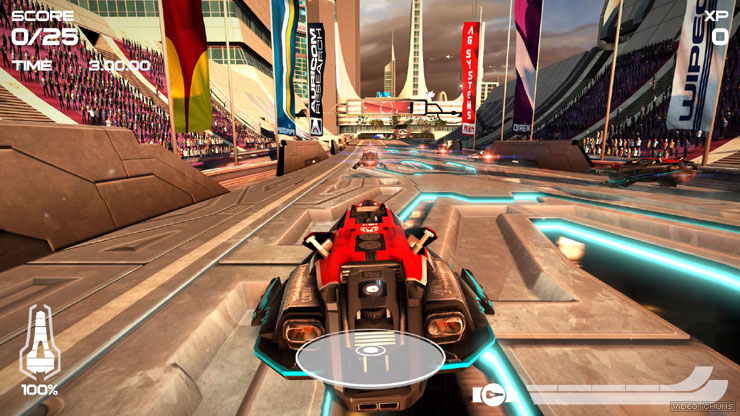 If you’re looking for a mix between arcade racing and vehicular combat, Wipeout: Omega Collection might be your safest bet. It’s sad that it doesn’t have VR support, but we can only hope that’s a possibility for the future of the Wipeout series. 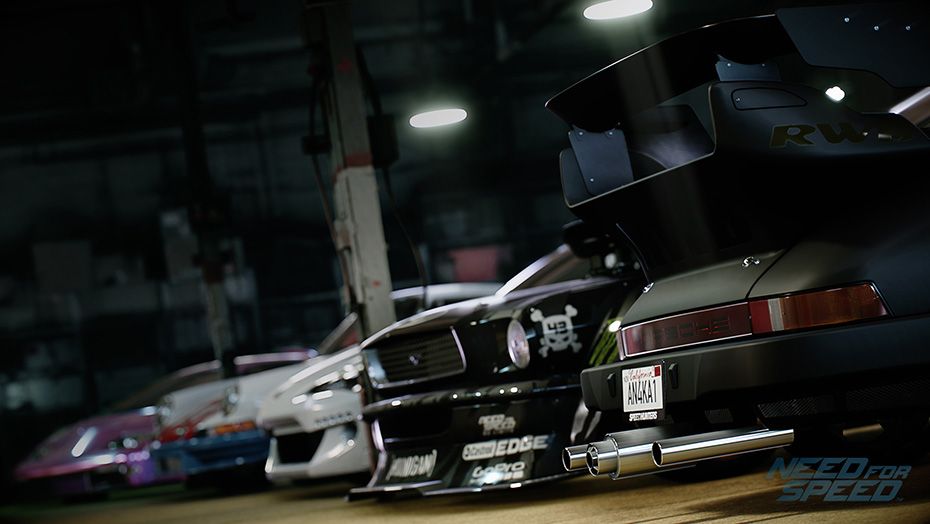 Need for Speed is a long-running series that managed to accumulate a bad reputation lately. Despite this, I really enjoyed getting back into the import scene and tunning culture.

Sure the game is brought down by bugs and glitches, but EA has a native reputation for that. Even with these inconveniences, Need for Speed does some things extremely well. For once, the customization system is diverse and will make you grind for the most exotic tunning parts. Second, the game is split into five different gameplay types: Crew, Build, Outlaw, Style, and Speed. Players will get points for engaging them through five overlapping stories. 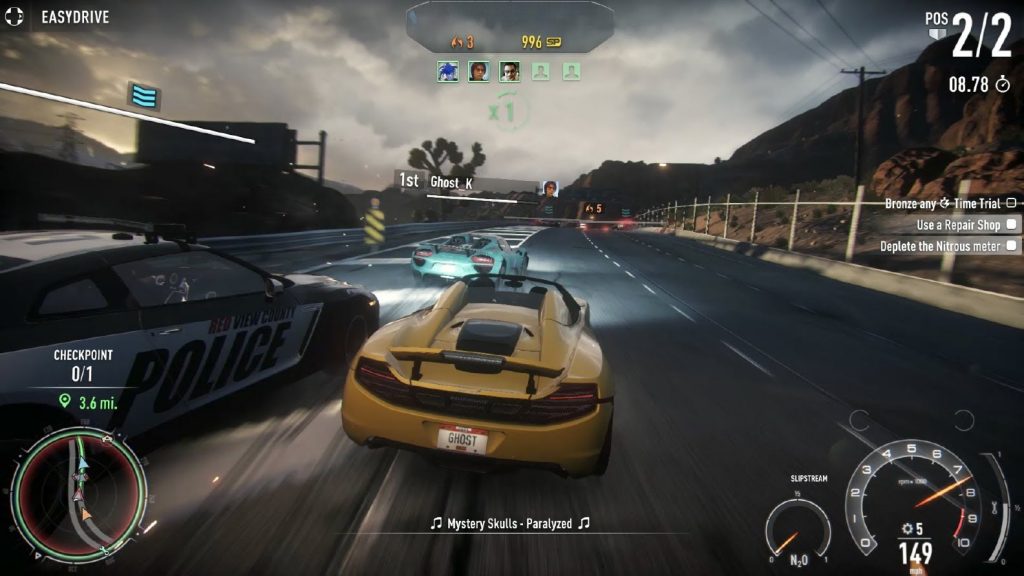 The photo-realistic visuals add to the whole experience, but like I said, you need to let the occasional bug go by without affecting your mood. If you can ignore some performance issues, you’re in for some fun police chases.