Nvidia GeForce GTX 1070 Ti, Pascal’s last addition to the 10-series GPU family, was originally introduced to counter AMD RX Vega 56. Pascal is a bit old at this point since we now have both Turing and Ampere to replace it. However, the GTX 1070 Ti is still a very capable card. It is especially an enticing offer considering you might have a better chance of getting your hand on it in 2022. 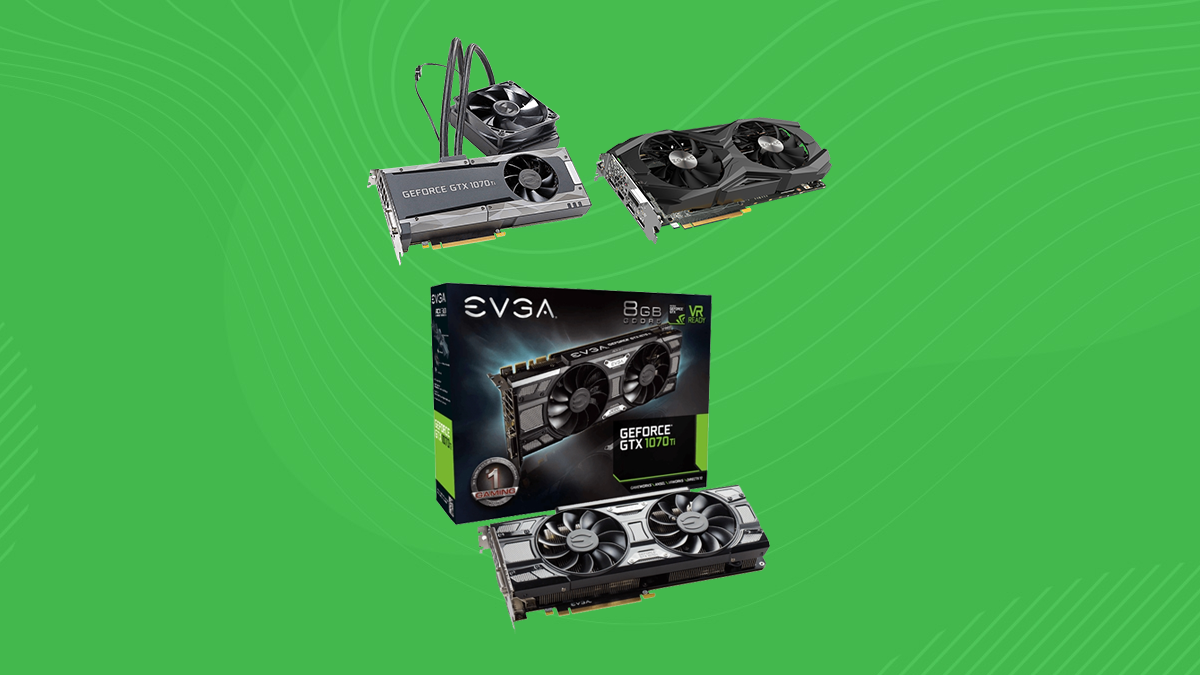 As for the architecture of GTX 1070 Ti is concerned, the memory performance of this graphics card is similar to GTX 1070 due to using GDDR5 memory while the core performance is much closer to GTX 1080, having 2432 cores against GTX 1080s 2560 cores. This lets the users of GTX 1070 Ti uses high-quality presets in AAA titles, although we will not recommend you to use this graphics card for 4K gaming, especially for 2018+ released games. In this article, we will be discussing the top-end variants of GTX 1070 Ti for various scenarios. 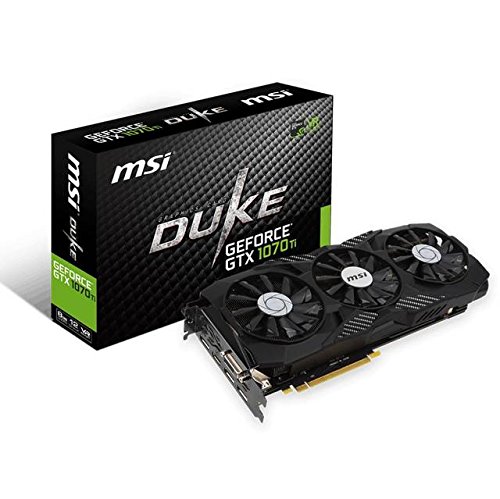 MSI introduced the Duke series of their graphics cards with the Pascal series and there was no Duke graphics card before Pascal. MSI GTX 1070 Ti Duke is a tri-fan graphics card with a beefy cooling solution and is among the longest cards by MSI. The graphics card features a black fan-shroud with three MSI fans, however, these are not the Torx fans used in MSI Gaming X / Lightning Editions which is why the noise levels are a bit more than the other MSI variants. The back-plate of the card has a printed MSI logo, white in color, and has a few vents but altogether does not aid in the cooling.

The graphics card offers a dual-slot cooler but the length and height of the card are exceptionally big which is why it will not be compatible with many micro-ATX casings. Despite having such a big profile and massive looks, this graphics card is not among the premium variants of MSI like the Lightning Edition models. The graphics card also provides RGB lighting on the top, although the lighting is very minimal with only the word “DUKE” lightened.

The cooling solution of the graphics card offers three heat-pipes which could have been better but the huge amount of aluminum fins cover-up for this and we noticed delta temperatures around 45-degrees which is quite satisfactory for such high-end graphics cards. The VRM of the graphics card is also actively cooled with thermal pads directly touching the heat-sink fins and heat-pipes, although the inclusion of a solid metal piece at such a place would improve temperatures by a lot.

The graphics card features an 8+2 phase VRM design which should be enough as this graphics card has a maximum power draw of around 180 watts. This leads the graphics card to achieve a core clock of 2050 MHz through overclocking, with memory clocks touching 2200 MHz. At 100 percent fan, this leads to temperatures around 65-degrees, and with a slightly aggressive fan profile than the stock, the temperatures close in towards the 75-degree mark.

This graphics card provides massive looks and performs much better than the reference edition too, which is why you should check this out before the stock runs out.

EVGA graphics cards are famous for having a slim and sleek design and this is also considered a disadvantage by some users as such designs lead to higher temperatures. The EVGA GTX 1070 Ti FTW Ultra Silent is one of the first EVGA graphics cards which utilize three slots and uses a 2.5 slot cooler, although the front design is similar to the regular SuperClocked model and provides a metallic look. The graphics card also comes with two BIOS which is considered a safe approach and the user can customize one BIOS without thinking about bricking the card. The graphics card also makes use of the back-plate and offers vents with dust-filter which is a fabulous design decision but still, the back-plate design of the FTW2 variant is a lot better, offering tons of rectangular micro-vents.

This graphics card is from the FTW (For The Win) lineup which offers great overclocking potential, although it does not offer the latest iCX technology which would make this card super expensive. The top of the graphics card features the name of the graphics card and EVGA logo which are RGB-lit and can be controlled through software.

The cooling solution of the graphics card offers six heat-pipes fitted into vertically aligned aluminum-fins. There are small holes in the fins from the side, which we believe aid in the acoustic levels of the graphics card. There are two fans used in this card and unlike the SC model, the FTW variant offers a bigger height making it capable of supporting larger fans. This increases the overall airflow of the graphics card and reduces the noise levels. We observed temperatures around 65 degrees at the stock fan curve and that is why you can change the fan curve to be a little passive so that you can achieve much better acoustic levels.

The VRM design of FTW variants has always been fantastic and uses high-quality components. This variant uses a 10+2 phase VRM design which enables the card to reach a maximum clock of 2075 MHz on the core and 2300 MHz on memory while the temperatures stayed around 65 degrees at a fixed 50 percent fan speed. This graphics card focuses on the acoustic levels and provides top-of-the-line overclocking performance which is why if you want these two things, the FTW Ultra Silent variant is just perfect for you.

ZOTAC GTX 1070 Ti AMP! edition graphics card is the mediocre variant among the ZOTAC lineup. The Amp Extreme edition sits on the top while the cheaper and compact Mini variant focuses on space consumption. This would make the Amp edition being modest in size and performance but the graphics card still offers a humongous shape with a dual-fan design. The front fan-shroud of the graphics card is built like a tank and the same can be said about the back-plate. It does not look as pleasing as the Amp Extreme variant and the Spectra RGB lighting is also minimal, with only the ZOTAC logo lit on the top.

The graphics card features a dual-slot heat-sink and the length of the heat-sink is fairly big resulting in efficient thermal performance. We noticed a maximum temperature of 63 degrees which was unexpectedly awesome, although the fans were a bit noisy and we believe the user should alter the fan profile to achieve better acoustic levels.

The graphics card uses a 6+2 VRM design which could have been better, however, the “PowerBoost” capacitor at the back of the card helps in removing ripples and other issues leading to a stable core clock and crosses the 2 GHz mark easily. This graphics card provides a great value altogether and is priced much lower than the premium Amp Extreme variant and, if you choose to consider it, will not disappoint you in performance.

GIGABYTE GTX 1070 Ti Gaming is a tri-fan variant with not many bells and whistles and comes factory overclocked. The build quality of the fan-shroud feels really bad and during installation, it feels like the shroud could break on applying slightly higher force. The top of the card features the Gigabyte logo being RGB-lit through Gigabyte’s RGB Fusion technology. The graphics card offers standard height and therefore should not have an issue with micro-ATX cases, although the length of the graphics card could still be a hindrance.

This graphics card is priced a little higher than some of the other variants which is why we believe you should only consider this card if you like its looks and want a graphics card with standard height while not compromising on the performance.

ZOTAC GTX 1070 Ti MINI edition is targeted towards users with very small cases and this graphics card offers a compact design minimizing as much space as possible. The graphics card comes with standard height and the length of the graphics card is slightly more than the size of the PCB. It provides a minimal fan-shroud coupled with a mediocre-sized heat-sink and uses two fans for cooling. The Mini edition does not offer RGB lighting but the top ZOTAC logo and two bars on the front are lit by white LEDs. The back-plate of the card also provides a lot of small vents to maximize the airflow as the card is already quite small.

The cooling solution of the graphics card keeps a good balance between the size and performance and we saw temperatures around 73-degrees and on overclocking the core clock to 2050 MHz and memory clock to 2200 MHz, we could see the temperatures around 77-degrees at a 70 percent fan speed. This also resulted in a very noisy operation but it was surprisingly good to see such a small graphics card pushing that much power.