Apple frequently releases the iOS, from beta to stable releases usually the latest one is the most stable and many users still prefer it over the newer releases.

In this article, we will refer specifically to version 10.3, but the steps in this article also apply to the following versions of iOS: 12.0+, and 13.0+.

Older iPhone and iPad models work snappier on iOS 10.3 when compared with the later releases. However, some users have troubles installing iOS 10.3 on their iDevices. A message “Unable to Install Update – Error occurred installing iOS “shows up on their screen that interrupts the installation process.

If you are experiencing this error on your iDevice, please continue reading this post and find out how to tackle this issue. Though you might not have faced this error before with a previous iOS release, it is not uncommon in the early phase of an update because so many users around the world are trying to update at the same time. In some cases, all we need is patience. Just wait for a couple of hours and try again. 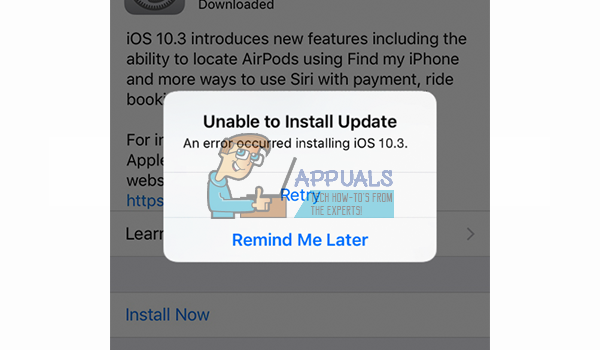 If you want to get iOS 10.3 on your iDevice, you will need your Apple ID and Password. If you do not remember your Apple credentials, do not install iOS 10.3. After the installation, you see a Hello screen where you swipe to complete. On the next step, you need to enter your Apple ID and Password to complete the installation. If you know your password, it’s easy. Just enter it, and your iOS device will unlock. However, if you do not know your Apple ID or Password, the setup will not allow you to use your iDevice. First, you will need to reset it at iforgot.apple.com and then get back to your device with the new (reset) password. And, the same rules refer to all the newer iOS versions.

With iOS 10.3 Apple introduced a brand-new file system. The previous file system (HFS and HFS+) that Apple used is almost 30 years old. They introduced it with the original iPhone 2G back in the days. Now iOS 10.3 replaces it with Apple’s own APFS – Apple File System. Before installing iOS 10.3, we highly recommend you to make a backup of your iDevice (on both iCloud and iTunes). 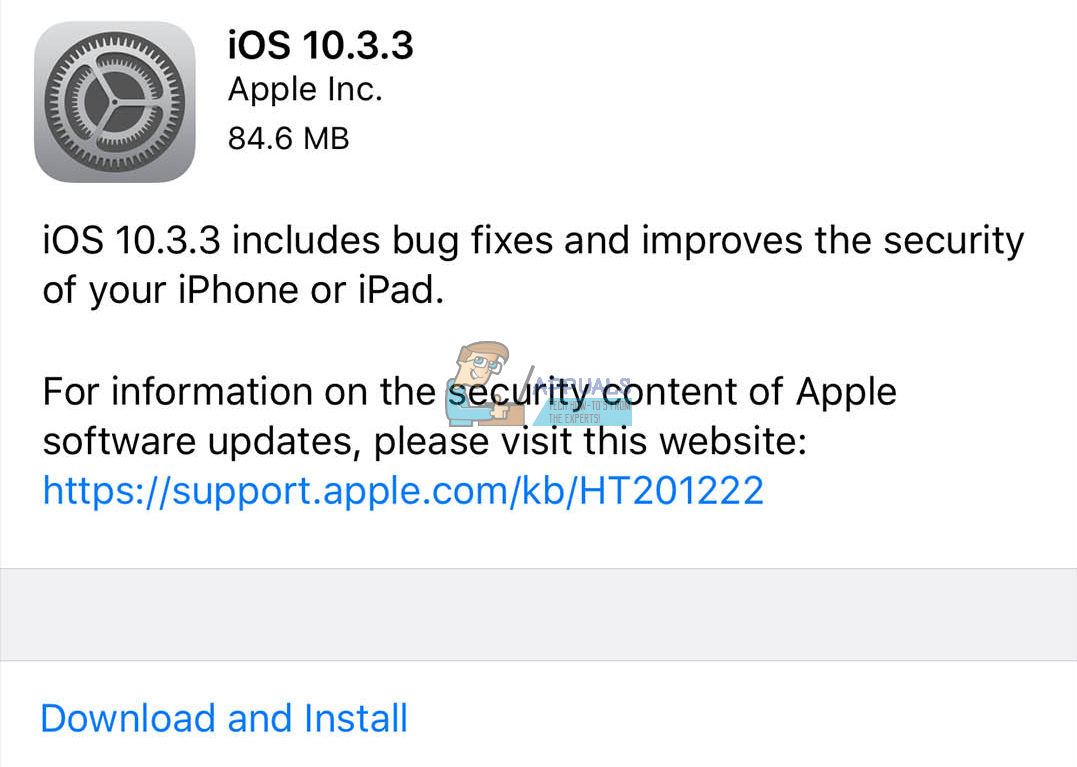 Do You Really Need to BackUp?

Backups are there to get your iOS device back into a working state whenever there is an issue during the installation process. The backup allows you to recover all your old data. So, Do you really need to backup? – Definitely YES.

We recommend backing up your data on both Apple’s variants, iCloud and iTunes. If you haven’t performed a backup on your iDevice, I also advise you to check the Backup section of this article for more detailed steps about the process How To Start iPhone X in DFU Mode.

Before You Start the iOS Installation Process

Please make sure that your iDevice has more than 50% battery juice, or more preferably, is connected to a power source. The iOS installation process may take a while so you won’t be able to finish it if you don’t have enough battery. If unsure, just plug your iPhone or iPad to power and do the installation.

How to Fix iOS 10.3 Installation Error

Now, after you finished with the backup, let’s get rid of the installation error. For users who experienced this error while doing an OTA (over the air) update on your iOS devices, try installing iOS 10.3-10.3.3 using iTunes.

If for any reason you cannot or don’t want to install iOS using iTunes, you can try the following tips and check if your iDevices updates to this iOS version without any hiccups using OTA.

Tip # 1: Toggle AirPlan Mode OFF and ON

Sometimes even a simple toggling the airplane mode off and on will do the trick for you. Here is how to do that.

If this doesn’t help, get to the next tip.

While performing the OTA update, it is crucial to have a stable internet connection. And, if you don’t, an error “Not connected to the Internet” may appear on your screen. However, sometimes users see this message even when they have a stable Wi-Fi connection. If you have a good internet network and still experiencing the “Not connected to the internet” message, you basically have 2 options. 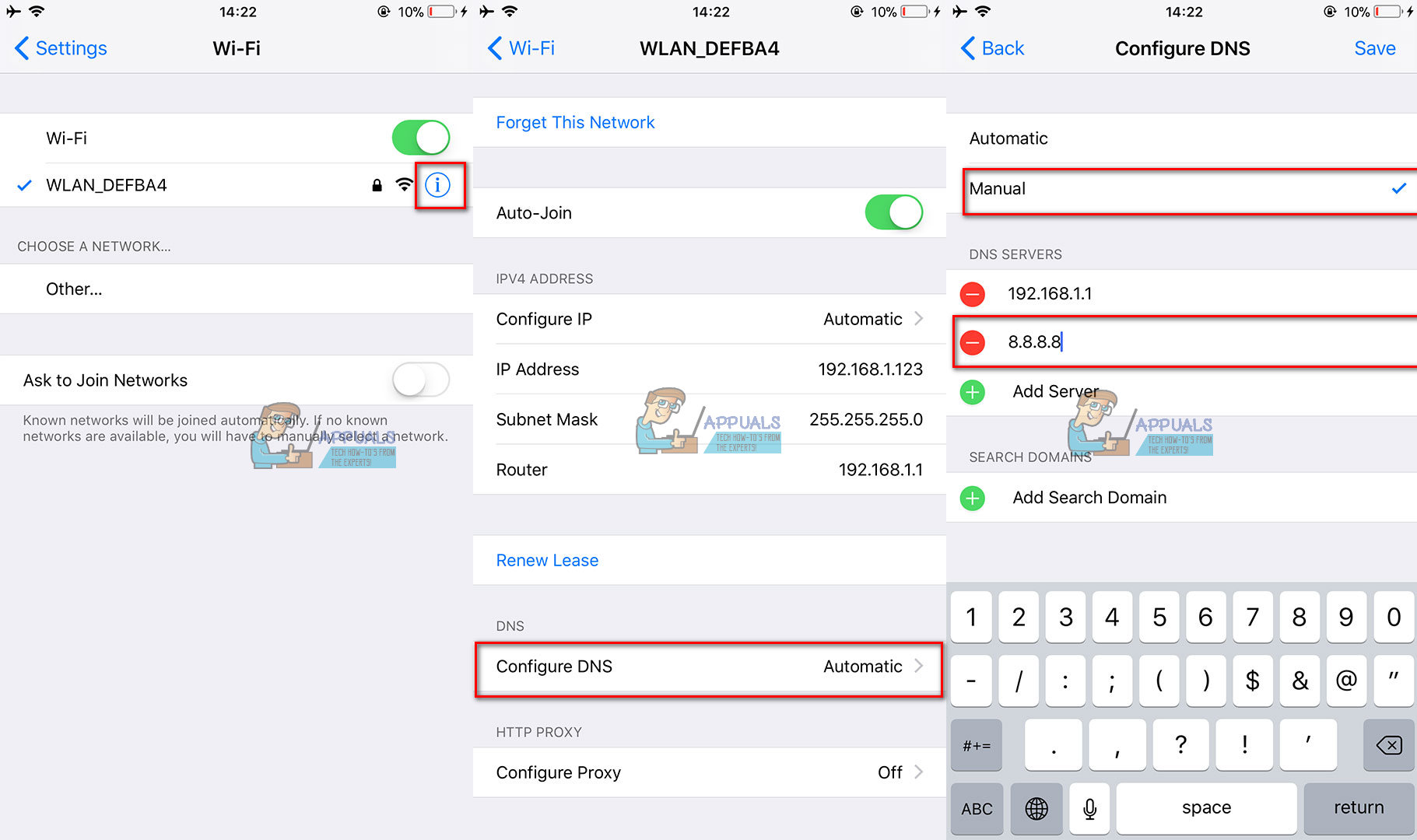 After performing each of the previous steps, check if you are still experiencing a problem while installing iOS 10.3.

Many users reported that when they have a problem installing iOS 10.3 on their devices, a forced restart followed by reinitiation of the update fixes the issue. However, the forced restart procedure is not the same for all iPhone and iPad models. So, depending on your device, choose the right method for you.

For iPhone 6S or below, all iPod Touches, and iPads – Press the Home and Power buttons at the same time until the Apple logo appears on your screen.

On iPhone 7/7 Plus – Press and hold both the Volume Down and Side buttons for minimum 10 seconds, until Apple logo appears on the screen.

Sometimes the bug may be located in the Settings app of your iDevice. So, restarting the app may get the job done for you. For that purpose, double tap on your home button or swipe to half of your screen for iPhone X owners to open the app switcher. Now, find the Settings app and close it with a swiping up on it (for iPhone X users – Long press and tap on the “-“ icon). Next, open the Settings app again and go to General then Software Update and try installing the update.

If you encounter the same error at this point, your best choice is to move forward with using iTunes to do perform the update.

Tip # 5: Hold The SHIFT Key When Updating With iTunes

In most cases, iTunes is a more reliable way for installing iOS 10.3 on your iDevice than OTA updates. So, if you are experiencing errors while updating from your iOS device try using iTunes instead. Connect your iPhone or iPad to iTunes using a lightning cable, press and hold the SHIFT KEY on your keyboard, and click on Update. This trick installs iOS 10.3 using iTunes without any data loss.

How to Delete Failed iOS Updates from Your iDevice

On some iDevices, unsuccessfully attempting for OTA iOS updates leaves software files on device’s memory. Before performing the iTunes installation, go ahead and delete the OTA version from your iDevice. To do that go to Settings, tap on General and open Storage & iCloud Usage. Here are more detailed steps for the procedure.

How to Check For a Failed iOS Update File 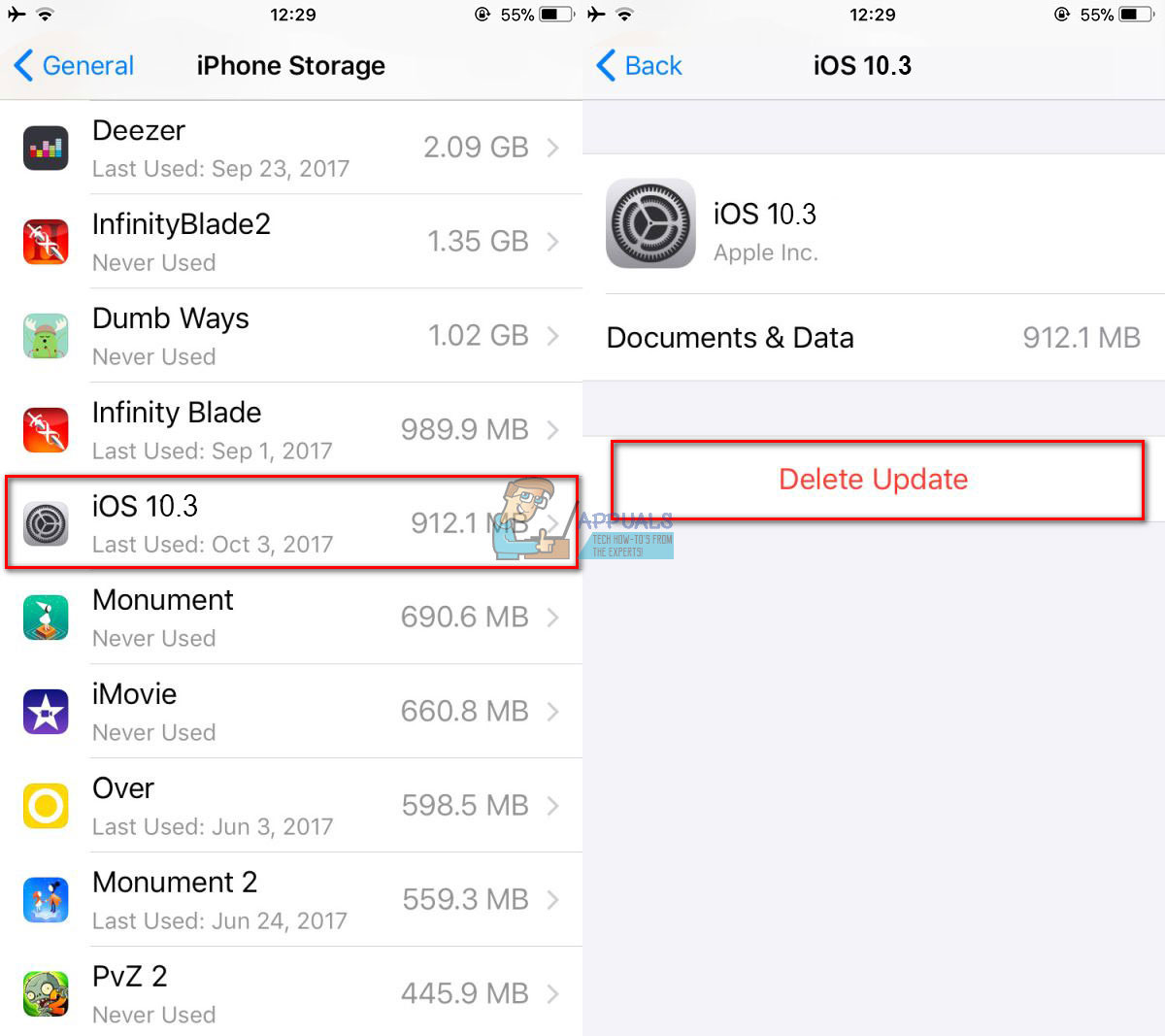 The step for removing the unpacked iOS Update file from your iDevice is crucial before you move forward with the iTunes steps. Users who skip this may experience the error “No Updates Found” when they try to update again.

And, if iTunes cannot find an update for your iDevice, quit iTunes, restart your computer, reboot your iDevice and try again.

Having Problems While Updating iPhone 5/5C or iPad 4th Gen?

Apple claims that iOS 10.3.2 update works on iPad 4th Gen and later, iPhone 5 and later, and iPod Touch 6th Gen. However, some readers reported problems upgrading their iPhones 5, 5C and 4th Gen iPads. Whenever they go to Settings>General>Software Update to install iOS 10.3.2 via OTA, their devices say that there is no update needed. Instead, it says that their current iOS version is up to date when checking for an update. Others report that their iPhone 5S, 5C, and 5 models won’t update even after deleting and re-downloading the updates multiple times. And, for some iDevices get stuck in verifying the software and ultimately restart or shut down without updating.

If you are getting the same errors on your iPhone 5, 5C or 5S (or any other supported model), try performing iOS update using iTunes and check if that works.

If you are sure that the OTA update is out for 32bit iDevices, perform a hard reset. Press a hold the Home and Power buttons until Apple logo appears on the screen. This action might force your iOS updates to show up on your older iDevice model.

The End for 32bit Devices?

iPhone 5, 5C and iPad 4th Gen models use 32bit iOS architecture. These are the last Apple’s devices that use a 32bit architecture and the A6 system-on-chip. All newer iDevices and iOS versions (post-2013) use 64bit architecture. Therefore, the 32bit iOS OTA version releases later than the 64bit one. However, owners of the iOS 10.3 supported devices can still update their devices by just connecting to iTunes and updating from there.

iOS 10.3 up to 10.3.3 includes warnings when opening 32bit apps. It lets you know that “This app will not work with future versions of iOS.” Furthermore, the latest iOS 11 no longer supports 32bit hardware.

How to Update iOS Using iTunes

Problems While Updating via iTunes?

Some users even updating via iTunes resulted in problems. However, we have fixes for the majority of them. If you are experiencing problems while updating your iDevice via iTunes, you can check the following methods for fixing the issues.

If you attempted an update and everything looked fine until the iDevice suddenly got trapped in the verify process for more than 20 minutes and then failed, try the following.

For many users, the second try gives the wanted results.

Others have successfully updated after performing a hard reset (pressing and holding power and home until the Apple logo appears).

Some users noted that since updating to 10.3.1 or 10.3.3, their iDevices drain the battery quicker than before. In some extreme cases, iDevices’ battery was completely dead before lunchtime, while in normal conditions, by that time the same users would have more than 50% juice. However, battery issues are familiar to many iPhone users. This kind of draining problem occurs iPhones since the initial iOS 10 release back in September 2016.

Unluckily, there is not a consistent fix for that issue. However, some users report increased battery life after they let their iDevices fully drain until shutting down, then fully charging without using the device during charging. And, that may be really inconvenient for many of us.

Tips From Our Readers

Feel free to try the methods for fixing the installing error with iOS 10.3 on your iDevice. Keep in mind that sometimes even if you perform all the steps right, Apple’s servers may be too busy. This usually happens briefly after releasing a new update. However, trying multiple times often fixes this problem. Let us know what was your experience when installing iOS 10.3 on your iDevice.