Users receive the “521 5.2.1 AOL will not accept delivery of this message” error when trying to send certain emails. This is usually indicative of a problem with the reverse DNS lookup. As it turns out, the error code is displayed either because AOL’s mail server rejected the connection, or because the sending server’s information couldn’t be loaded into the DNS properly.

Although AOL is not entirely clear on what triggers this issue, there are a lot of discussions that blame “spammy emails” for the apparition of this issue. Apparently, users might receive this error if the body of the email contains what AOL considers as “bad links”. As it turns out, these links might not be included intentionally by users – most of the time, the links are generated by applications that automatically embed non-FQDN (fully qualified domain names) URLs into sent emails.

Whenever you see this particular error message, get in touch with your email administrator. It could be that your user account has been taken over by spammers and is being used to propagate the spam messages. AOL keeps an internally maintained AOL IP blacklist, so if spam traffic is making it’s way to them from your IP, it will be added to that list.

But keep in mind that this does not necessarily mean that your account has been compromised. AOL has a long history of misidentifying legitimate messages as spam. There have been occurrences in the past where major provides where blacklisted by AOL for “bad mailing practices“. AOL is known for being very pretentious from whom it accepts emails from and is generally perceived as a company that neglects mailing standards.

If AOL is bouncing your emails with the “521 5.2.1 AOL will not accept delivery of this message” error, you should start by checking your IP reputation using this AOL postmaster tool (here). This is a reputation check tool that analyses your email server IP by taking into account multiple factors such as spam complains, not-spam reports, invalid recipients and spam folder deliveries. Enter the email server IP address that AOL bounce back to view the reputation of that particular IP. 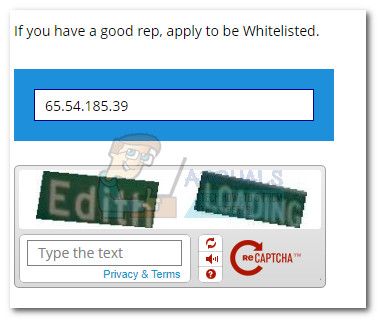 Note: If you don’t know the IP address of your mail server, you can open a Run window (Windows key + R), type “cmd” to open Command Prompt. Then type “ping mail.yourdomainname.com” and hit Enter. Once it starts pinging, you can fetch the email server address from the line that says “Pinging x.x.x.x with 32 bytes of data.” – the x.x.x.x is a substitute for the server’s IP address.

Unfortunately, if your IP reputation shows as poor, the quick solution would be to locate the account that is sending spam and shut it down. Additionally, you can try opening a support ticket on Postmaster AOL (here) and plead your case to get off the blacklist. But be warned that AOL’s support is notoriously famous as being extremely unhelpful.

In the event that you’ve had this problem before, you can stop them from blacklisting your mail server IP again by requesting to be whitelisted. You can do it from this link (here). Although we didn’t try it for ourselves, we hear that it’s quite the painful process that can take over a month to complete, so arm yourself with patience.