If you aren’t familiar with Wreckfest, it is a demolition derby themed racing game with a highly complicated physics engine. Previously titled Next Car Game, Wreckfest is the spiritual successor to the beloved FlatOut series. After well over four years in early access, developers Bugbear Entertainment announced the news in a blog post published today.

Today, Bugbear announced that the PC version of Wreckfest will see a full release on June 14th 2018. Console players will have to wait a fair bit longer, as the game will launch on PlayStation 4 and Xbox One on November 20th 2018.

The announcement post reads, “With the release, players can expect a set of brand new features. The challenge mode with all new unusal vehicles – like a crop harvester – guarantees crazy races, you’ve never seen before. Also players can now customize their cars with quirky items. Why would anyone have a car without a shark fin?”

It seems that the full version of the game will allow you to kit out your vehicle with “quirky” items. I’m excited to see two cars with shark fins colliding at high speeds. No more details about the full release have been revealed yet, but developers plan to give us more information before the launch.

Wreckfest was originally called Next Car Game when it was first released as a very early sneak peak build. Following that, the early access version of Next Car Game was released in December 2013. Not even a year later, the developers changed the official title of the game to Wreckfest on 3rd October 2014. 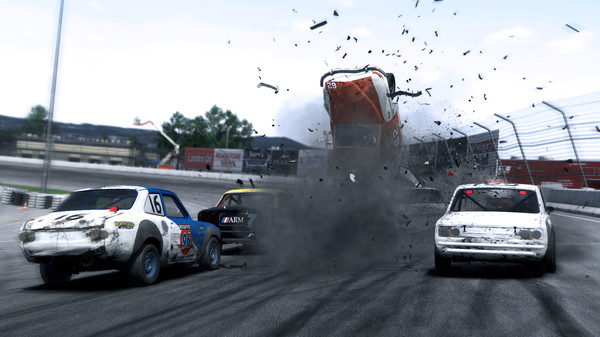 Wreckfest and the FlatOut games both display common traits as they are developed by the same studio. FlatOut fans craving for a nostalgic racing experience should seek out Wreckfest. Both the destruction derbies and track races feature sophisticated driving dynamics and intense crashes with “soft-body damage modelling.”

The game is available to purchase on PC via Steam for $40. The Digital Deluxe Edition gives players an exclusive race car, wallpapers and a soundtrack.