Error 0x87AF0001 is an error with the Windows Store, where it won’t let you download or update new and existing apps. The error message doesn’t really give you any useful info, and it doesn’t tell you where the root of the problem is, so it isn’t of any use. This usually happens on quite a few Windows 10 builds, and Microsoft are fully aware of the issue.

What actually happens is that when you open the Windows Store in order to update your existing apps, or maybe try to download a new one, the update or download will either start, and then fail after a while, or won’t start at all and give you this error message. You’ll get the error code and message no matter which app you try to install, so it isn’t the app’s fault.

You will find some people telling you to rename the SoftwareDistribution folder or run the Windows Troubleshooter, but none of them will help. There still isn’t a clear solution for this issue, but until Microsoft releases an update which fixes it, there is one workaround that works for 99% of the apps, and will let you get your updates and downloads. Read the methods below to see how you can download your apps and updates, and don’t be afraid to try it. 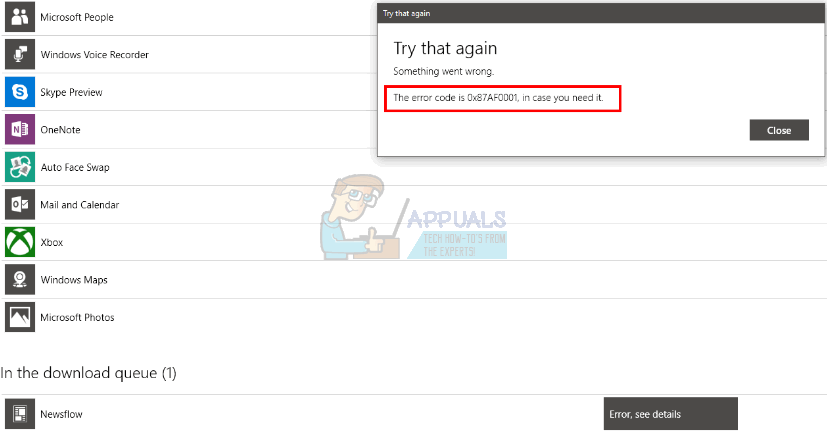 This issue is believed to be connected to Windows Explorer, and some users have reported that if they disable the process while they’re downloading, the downloads go as expected. You will need to restart the process afterwards, and the steps below show you how to do that.

Even though this isn’t a fix, but a mere workaround that requires you to do certain things to be able to download and update apps that shouldn’t require this much work, it’s the only thing that you can do at this point. If you’re having this issue, feel free to try the method above and fix it, at least temporarily.

Method 2: Do a Clean Boot

Turn off the firewall until updates and downloads have finished. If you are running Windows Firewall, turn it off using the commands below, for all other third party firewalls, disable them via the program’s interface.