Linux Mint Dual Boot automatic install options use unallocated space to install the operating system. If you wanted to give Linux Mint 40 GB of space to work with, then you should ensure that there are 40 GB unallocated on the disk you’re installing to rather than a partition of 40 GB of free space. This relatively unorthodox definition may confuse many power users. Free space generally refers to any area of a file system not currently allocated to a file.

Keep in mind that the Linux Mint automatic installer uses metric gigabytes and not the binary ones you might be used to thinking in. You could separate space with the Windows Disk Manager beforehand, or use the partition utility that the Linux Mint installer provides for you during installation. Make and verify a complete disk image before doing an automatic installation in case something goes wrong. On the other hand, if you’re not dual booting, then you might want to consider completely removing any existing partition data. This can be useful if you’re looking to build a completely new boot structure without sacrificing the elegance of an automatic install.

The installer will ask you where to put your new files. Once again, this prompt is rather unorthodox for anyone who has used the installer included with Ubuntu and its derivatives, Fedora, Arch or Debian. New files, in this case, actually refer to the operating system installation itself and not user documents.

Select an unallocated section of the disk and the rest of the installation process should be automatic. This is assuming you have an unallocated partition to begin with. If you’re installing Mint to a drive with no other operating systems, then this will work fine. However, if you want to configure GRUB to boot from more than one partition, you might be in a jam. You need to examine the partitions you didn’t inside of Microsoft Windows or the GNOME Disks Utility in another form of Linux booted from said drive.

Assume a physical SSD gets broken up into four primary partitions. One is the partition that existing installations of Microsoft Windows views as drive C:\, and more than likely the Mint installer will announce it to you as an NTFS volume. Don’t touch this unless you don’t mind loosing your Windows installation. If you wanted to delete it, then you could click on the button in the installer with a minus sign positioned inside of it, and then agree to install Linux Mint to the now unallocated space. 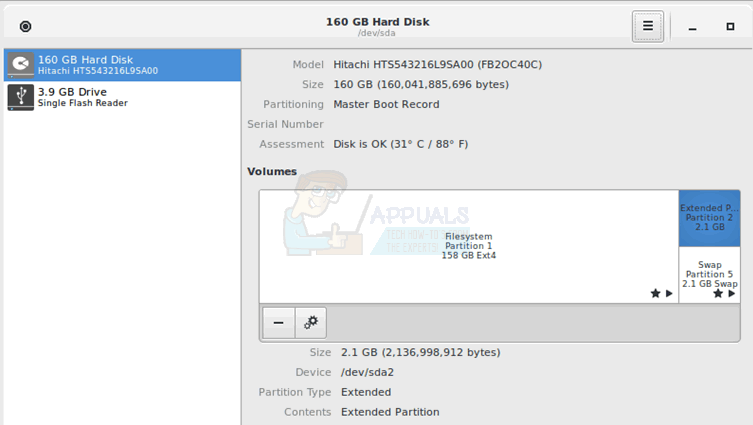 Assuming instead that you’d want to preserve it, look at the other partitions. If one is a data partition that you have removed all files from, then do the same to it. Many power users prepare for installation by creating a new completely empty partition and then finding that Linux Mint’s installer considers it full. If they access said partition in Windows as a drive, say E:\ or something similar, then it reads there isn’t anything there. The reason is that the installer incorrectly believes that you wish to preserve the file system and not any files themselves. If you’re certain that you don’t mind loosing this partition, then you can use the same process to delete this partition.

It may also prompt you about where to create an additional swap partition, which might feature an extended partition container if you’re using MBR partitioning, which shouldn’t be an issue with newer versions of Microsoft Windows. You will need a second partition for the swap area, however. Don’t worry, though, because if you’d rather not sacrifice an area inside of your partition structure you can always create a swap file inside of your Linux structure later.

You may be using this automatic install feature if you’re also keeping a copy of Microsoft Windows or perhaps OS X to boot. If you’re not only going to use Linux Mint, then you might want to create an additional small partition that you can use to trade files between operating systems with. If you’re using MBR partitioning and you already have an extended partition set up, then select the extended partition in the configuration manager and create a small partition inside of it. Simply create one inside of an area of unallocated space if the Linux Mint program tells you that you’re using GUID partitioning. You can create whatever size you need, but if you’re just trading a few files at a time you won’t need anything very large, especially if you don’t have the biggest drive in the world.

Linux Mint may present you with a drop-down box asking to select a file system to format this partition, which will depend on your needs. Different installer versions can format partitions to different systems. Under most circumstances, Windows can’t read from ext2, ext3 and ext4 volumes. Both Linux Mint and Microsoft Windows can access NTFS volumes, and Linux comes with a healthy package of tools that you can use to work with these volumes.

OS X can’t generally read from ext# versions nor can it read NTFS volumes in most situations, which can be a problem if you’re dual-booting Linux on a Macintosh or you’re working with some sort of Hackintosh hardware. Fortunately, all of these operating systems can read from FAT32, which the Linux Mint installer will usually give you as an option. If it doesn’t, then you can easily format an empty partition as FAT32 later on. Even many exotic operating systems like OpenDarwin, FreeBSD, Haiku and Android x86 will work with this volume.

Keep in mind that while Microsoft Windows and OS X both work with exFAT volumes natively, you’d have to install drivers to get Mint to work with them.

Should you find that you have a small partition at the beginning of the partition graph in the installer that’s called EFI or anything similar, or if you find one formatted to the FAT12 file system, then you shouldn’t touch this in most situations because its needed for booting your system. This is usually only true of GUID partition tables. Likewise, if you’re working with Macintosh or Hackintosh hardware, you won’t want to touch the HFS or HFS+ volumes needed for booting. Macintosh systems might also sometimes have volumes on them that Linux Mint calls Darwin UFS, which again you probably need for starting OS X.

What Does the Linux Mint Dual Boot Automatic Install Utility Mean When it Asks for Free Space?