The ability to use a virtual console isn’t something that’s hidden. Virtual console refers to a technology that allows Linux to provide emulation for keyboard and monitor pairs attached to a more powerful central computer system, which was a workstation paradigm that was once extremely common. This paradigm is less common today, but the technology still provides a way to interact with a modern machine extremely efficiently. Some users incorrectly believe that there is a problem if they have entered into a pure black screen and immediately believe they need to troubleshoot their system.

This is actually designed behavior, but if you feel it’s been a problem a simple key command is enough to get your system back under control. If you’re a true power user, however, then there’s a command that can make this function every bit as useful as an xterm for CLI work.

Hold down CTRL and ALT while pressing F1, F2, F3, F4, F5 or F6. These are all mapped to virtual consoles and can be moved between easily. CTRL+ALT+F7 is mapped to your graphical user interface. If you consider these a problem, then hold down CTRL and ALT then push F7 and they’ll never bother you again. If you’d rather use one, then you will prompted for a user name and password.

Virtual consoles predate xterms, so some of the functionality of graphical command lines is included in them by design. First hold down CTRL and ALT plus F1 to get to the first terminal. When prompted for a user name, enter yours and then give the system your password. Some administrators can also log in here as root with the super user password, but this is not only not recommended but also additionally deprecated on some distributions.

You can now actually set screen colors with a command much like the menu driven system in an xterm. First type the command: 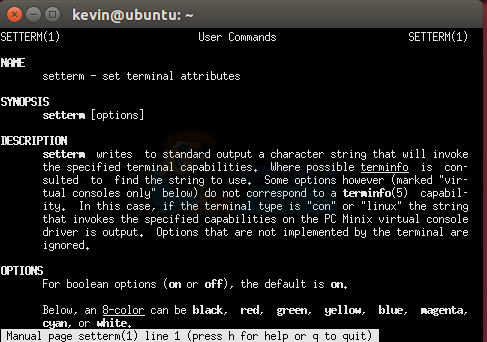 To see which colors are valid for your terminal. Then you can type the command:

Replace color with two valid colors from the man page. Finally type clear to clear the screen to have it replace the screen colors.

How to Use a Virtual Console in Place of xterm