Last month Nexus Mods user PureDark revealed that the PC Modding Community is working on a new unofficial mode for The Elder Scrolls V: Skyrim that will add Nvidia’s DLSS, AMD’s FSR, and Intel’s XeSS Upscaling technology in the game to enhance the already beautiful game.

I am happy to inform you that the said mod is now released and available to download. The mod supports version 2.0 of AMD’s FSR, FidelityFX Super Resolution and Nvidia’s DLAA/DLSS for RTX users. Additionally, with the power of this new mod, the Elder Scrolls V: Skyrim now supports the latest upscaling technology. 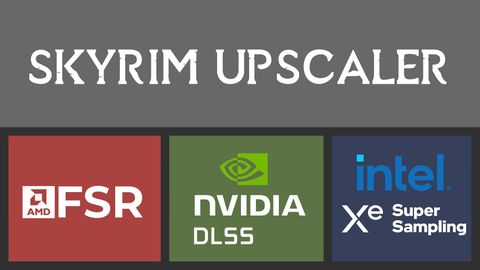 For those who don’t know, upscaling is an algorithmic piece of tech that, put simply, redraws pixels on screen to make the image comparable to a higher resolution without the game actually being at a higher resolution, thus not putting additional strain on the user’s hardware, especially on PC.

Before you proceed ahead to download the mod and experience the improved visuals yourself, the following are a few checkers to keep in mind:

It is impressive that an 11-year-old game is still alive and doing well, only because of the love of the fans and the passion of the modding community to keep this beloved game up to date with the help of unofficial mods, which have added features like new missions, expansion and visual improvements over the years.

The Elder Scrolls V: Skyrim is an action role-playing video game developed by Bethesda Game Studios and published by Bethesda Softworks. It is one of the most successful RPGs of the time that has received multiple awards for its gameplay and expansive world that provides players with an immersive experience.

What are your thoughts about this new mod for the game? Are you going to try this out, or already have played the gaming utilizing this mod? Let us know in the comment section below.