Google is effectively working towards making life on this planet easier for everyone, and as of earlier this month, Google has come up with a neat little treat for parents looking to educate their toddlers. Google Search can now be used to teach kids about the different sounds that different animals make. Whenever someone searches for the sound that an animal makes on Google – “meow”, for example – the search engine now displays, at the top of the results page, an illustration of the animal that makes the sound, its name, a sample recording containing the noise it makes and suggestions for more animal sounds. The sample recording containing the sound that a specific animal makes can be played by clicking on the blue speaker icon.

This new Google search feature is also triggered when someone queries the search engine as to what sound a specific animal makes. For example, searching for “What does a cat say?” or “cat sound” is bound to do the trick. 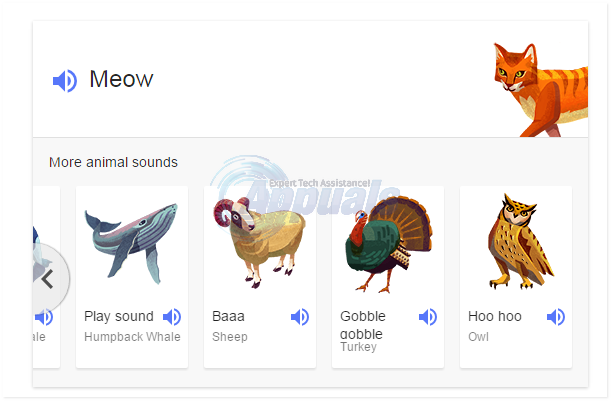 Google did not make a big deal out of this new feature – something that is not completely unheard of, especially with some of the smaller improvements and features that Google rolls out. However, Google did publish a post dedicated to this new feature and its specifics on the Google Austria blog, which can be found here.

Although this new feature is not something that is likely to break the internet, it is certainly a tool that will make it much easier for parents to educate their kids in the sounds that some of the most common animals that live among us make.

Kevin is a dynamic and self-motivated information technology professional, with a Thorough knowledge of all facets pertaining to network infrastructure design, implementation and administration. Superior record of delivering simultaneous large-scale mission critical projects on time and under budget.
Browsers
Recent Posts
Back to top button
Close

How to Teach Your Kids Animal Sounds Using Google