Photography on Android devices has come a long way – certainly not in the same league as a DSLR under certain conditions, but getting closer. But the thing I see is that a lot of people purchase these phones with 21mp dual-lens cameras, and then leave their camera app on automatic or default settings. It’s like buying a Porsche and doing 40mph on the autobahn.

So the purpose of this guide is to help you understand what each and every setting in most camera apps does to your photos, and scenarios where you want to adjust them. I will provide example comparison shots from my own phone, an Infinix Zero 4 which has a 16 MP f/2.0 Sony IMX298 camera in it.

You may also want to read: How to Enable Camera2 API and Shoot RAW on Android

Most camera apps have a variety of focus modes, but they’re typically named the same thing. The most common modes are:

ISO is an important yet often overlooked setting. It affects your camera’s sensitivity to light – without going into too much detail, lower ISO will typically mean a darker picture, but with more detail. Higher ISO means a brighter picture, but there will be ‘noise’ like TV static, especially if the scene was already bright. You want to set the ISO higher when you’re taking a picture in a dark scene, and lower when you’re in a bright scene. ISO typically ranges from 100 to 1600 on Android cameras, though specialized point-and-shoot cameras can have ISO ranges up to 500,000 and beyond. 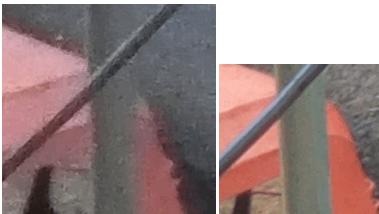 <Two photographs of the same object – the first is ISO-1600 with macro focus, the second is ISO-100 with infinity focus. Notice how much artifacting appears in ISO-1600 compared to ISO-100 setting>

That’s a really simple explanation, but ISO has other purposes besides just making pictures darker and brighter – because ideally, you are combining the ISO with focus, depending on what you want to capture. For example, let’s say you want to capture the smoke coming from a burning incense stick. Ideally, you would have a source of light aimed at the smoke to highlight the details of the wisp trails, then use macro focus + a low ISO setting so that the light source doesn’t interfere with the details of the final result.

Exposure Value is used to adjust how sensitive your camera is to bright and dark areas in the same scene. For example, if you’re shooting a landscape of trees on a bright sunny day, but there’s a lot of dark shadows. So if you don’t adjust the settings, you may get a picture that has ridiculously bright green foliage where the sun hits the trees, and super dark almost pitch-black shadows in other areas. So by adjusting the EV, you tell the camera to compensate for these differences in light, and try to evenly balance them.

So if you’re capturing a dark scene with a few bright areas, like a night-time city street with a few neon signs, you should lower the EV. And if you’re shooting a bright scene, like a beach or sun reflecting off white snow, you should raise the EV.

This largely depends on your device and the app you’re using, but in many camera apps that offer manual controls, you can also change the photo mode to these:

HDR – This will shoot photos in High Dynamic Range. The camera takes multiple shots at different exposures, and combines them into a single image. So typically in HDR mode, your camera will take 3 pictures – a dark one, a bright one, and a normal one. It will then combine these 3 pictures into one, to give the best brightness range. It’s a bit like an automatic Exposure Value, and it works best when you’re shooting bright scenes that have a few areas of darkness. The drawback of HDR mode is that it takes longer to process the final photo, and you have to keep an extremely steady hand while snapping the photo – you’ll typically want a tripod when using HDR mode.

DRO – DRO is Dynamic Range Optimization, and it’s similar to HDR mode in what it achieves, but DRO processes the images faster than HDR, and it’s also compatible with older camera API software in Android devices. So think of it like HDR-lite mode.

EXPO[] – This is basically HDR mode on steroids, because you can control how many photos it takes, and at what exposure values. However, instead of combining the photos into a final shot, you need to manually transfer the photos to a photo software for processing them into an HDR image.

This basically adjusts the temperature of the photo, which affects the color of white objects in the final photo. For example, if you’re shooting pure white snow, it might have a blueish tint in a photo that was taken under a cloudy day and standard white balance. So if you want to accurately capture the whiteness of objects, you need to manually adjust the white balance, or select a pre-set depending on your lighting conditions.

The available scene modes are dependent on your camera drivers, so they vary between devices. But typically, the available scene modes would be things like “fireworks”, “beach”, “night portrait”, etc. The idea is that you would choose a scene mode depending on the type of scene you’re shooting, and the camera tries to automatically select the best settings for that sort of picture.