Several details about Sonic Frontiers, including cutscenes and Super Sonic’s Titan boss battle, are shown in a massive gameplay footage that was leaked.

A lengthy gameplay video showcasing numerous cutscenes and mechanics from Sonic Frontiers has been posted online. This leak is one of the biggest for the game. This leak occurs after EGX London, where Sonic Frontiers offered a free public demo for attendees to try out.

Despite the excitement and positive impressions that fans had after playing the demos, many other players were eager to learn more about the game’s secrets. This may have caused the greatest leak of the game to yet.

Sega already faced problems with the game being leaked at Gamescom, where it was found that a flaw allowed players to progress beyond what was intended. Staff at numerous events made an effort to stop people from filming the kiosks.

Fans nevertheless found a tonne of new mechanics to share online, so videos continued to be posted on social media despite this. This includes things that haven’t been properly disclosed, such new cyberspace levels and a nod to the Sonic movie series. This leak is similar to previous ones in that portions of the game’s first fifth were recorded and posted online.

A YouTube user going by the name of Acro posted the now-deleted leaked video, with their clip covering at least fifteen minutes of the game. This contains Dr. Eggman’s discovery of the Starfall Islands in Sonic Frontiers’ opening cinematic, as well as Sonic, Tails, and Amy Rose’s descent into the vortex that transports them to cyberspace. Seven different Cyberspace Levels from Sonic Frontiers were also included in this film, some of which have not yet been fully unveiled. 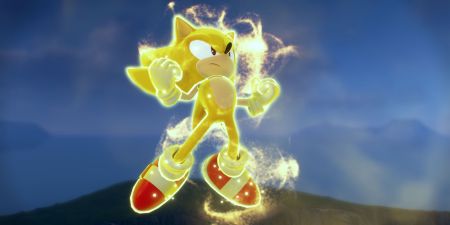 The eagerly anticipated Super Sonic vs. Titan Boss Fight was also shown in this gameplay video. However, shortly after this gameplay leak, Sega itself removed the original video due to a copyright dispute, while mirrors of the video and pictures have continued to circulate on social media.

Due to this, a lot of fans have voiced their dissatisfaction and cautioned others to stay away from specific accounts and mirror videos that aim to ruin the impending experience. Having said that, this gameplay footage wasn’t stolen from a demo, although it did happen; rather, it was apparently released by a beta tester for the game.

This is probably the reason Sega doesn’t intend to release a Sonic Frontiers sample for free; gameplay leaks like this are getting more frequent, especially if the trial comprises the majority or the entire game. Sonic Frontiers will launch on November 8 for PC, PS4, PS5,, Xbox One, and Xbox Series X/S.