Enthusiast Citizen has revealed a new rumour on AMD’s next Radeon RX 7000 graphics cards, which are based on the RDNA 3 GPU architecture.

The leaker, who has a very good track record of accuracy, claims that AMD will launch two flagship models in December and provided some performance predictions.

Enthusiast Citizen reports that AMD will formally unveil their RDNA 3 line of graphics cards on November 3rd under the Radeon RX 7000 branding. The red team has already declared this to be official. 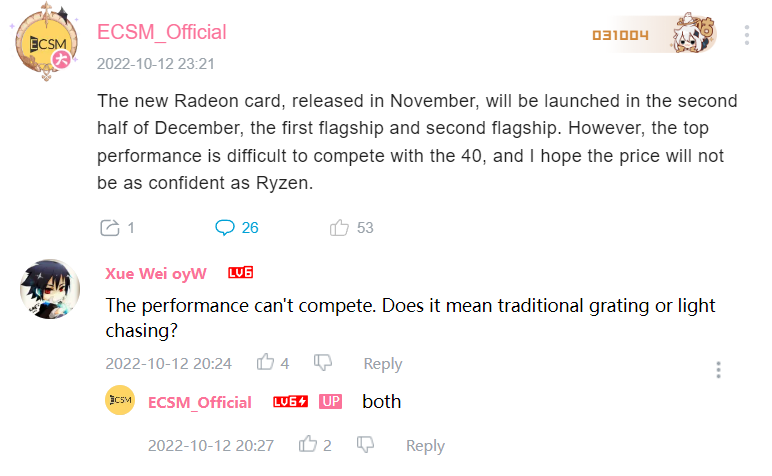 We’re looking at about a month of delay between the retail launch of these graphics cards and December, which isn’t surprising given that AMD’s Ryzen 7000 CPUs experienced a similar delay between their public introduction in late August and their retail availability at the end of September.

We will receive two Radeon RX 7000 flagship graphics cards, referred to as the “first flagship” and “second flagship,” according to the leaker. It is unclear if this is referring to the Navi 31 and Navi 32 dies or to two Navi 31 GPU variations. You can be sure that both of these GPUs will have an MCM design and TSMC’s 5nm fabrication node.

This may make the AMD lineup struggle to compete in terms of ray tracing and rasterization performance. Consequently, AMD might not be as certain about pricing for their Radeon lineup as they are for their Ryzen lineup.

Even if the leaker has a strong track record, it is best to treat this information with caution until we hear from AMD directly. The performance estimates indicated here may have been based on early samples or early drivers, and this wouldn’t be the first time this had happened.