With a new initiative known as RMP or the Radeon Monster Profile, the creator of CTR & Hydra, Yuri Bubily, aka 1usmus, has a tweaking product in stores. This time, the emphasis is more on GPU performance than CPU, hoping to provide better performance and power savings on RDNA 2.

Fall plans. You already heard about my new calculator for DDR5 (demo soon), today it's time to tell you about the presets for RDNA2 video cards which could surprise you.

More in the slides…😎 pic.twitter.com/WnVUJOdmuR

The Radeon Monster Profile, according to Yuri, employs a unique voltage/frequency curve with a mix of particular parameters to maximize the wattage and performance of AMD’s Radeon GPUs. The graphics card may then perform to its full extent. RMP devotes special attention to the memory sub-system, where the operating voltage may be cut by 6%, resulting in lower power and lower heat output on the GDDR6 memory modules, even if the GPU is the primary component of any graphics card.

RMP boosts the desired core (GPU) operating voltage frequency to enhance performance. For example, the AMD Radeon RX 6800 XT graphics card may increase its operating frequency by up to 300 MHz. This enables an increase in performance of up to 13% above stock. 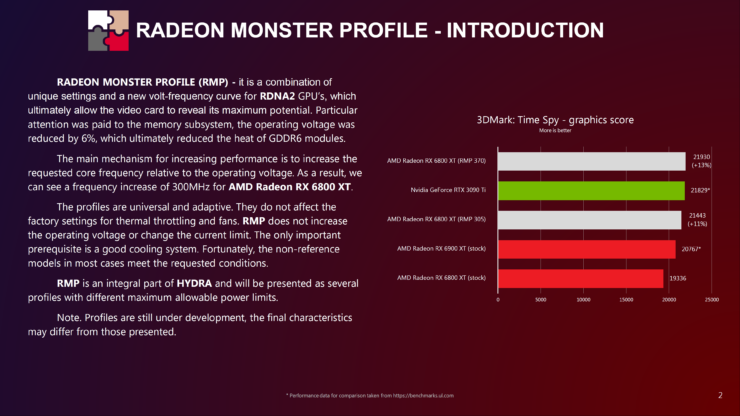 An astonishing 21% increase in frames per dollar is achieved with an RMP-optimized AMD Radeon RX 6800 XT, which delivers the same power usage as standard.

The Radeon Monster Profile (RMP) will provide several universal and adaptable profiles. They won’t change any factory-shipped parameters, such as fan speeds, and thermal throttling restrictions, that are kept in the GPU’s BIOS. Additionally, it doesn’t modify the current limit or raises the working voltage. 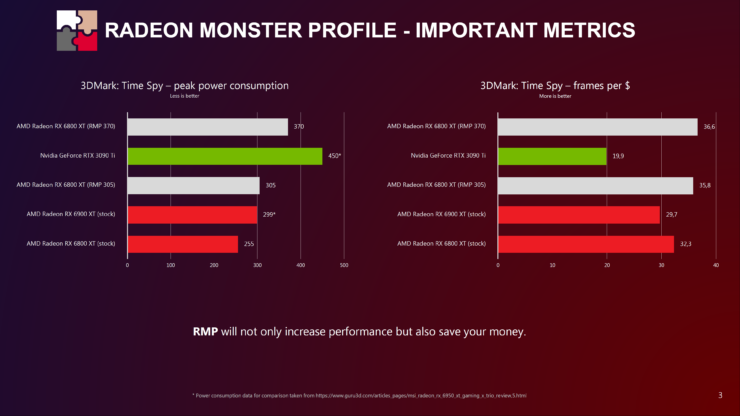 However, GPU cooling is a need to guarantee the most remarkable performance with RMP. Your AMD Radeon graphics card may perform much better with a decent cooling system. The majority of non-reference cooling options for the Radeon RX 6000 series are said to satisfy the necessary cooling requirements. RMP will be included in the Hydra suite, which is used to adjust AMD’s Ryzen CPUs, upon launch, which is anticipated to occur this autumn. Several OC and tuning profiles with various maximum permissible power restrictions will be provided to it.

The performance shown here may not represent the final product since the profiles are still being developed. Yuri claims that although RMP will have support for RDNA 2 GPUs at launch, he also plans to add support for the anticipated RDNA 3 GPUs later on.