Intel‘s current-gen Alder Lake 12th Gen processors have shifted the paradigm completely in the Blue Team’s favor. Alder Lake helped the company break the cycle of 14nm stagnation with a breakthrough product that was not only topping the charts but was priced extremely competitively. Both Alder Lake desktop and mobile counterparts are arguably the best in their class and Intel is looking to extend this lead with Raptor Lake as well.

Raptor Lake or “Raptor Lake-P” to be specific, is the codename for next-gen laptop silicon for 13th Gen Core series. Spotted originally by popular leaker @momomo_us, one processor from this series has been spotted on UserBenchmark, tested with their software around a week ago. The test platform is clearly based on Intel reference system as noted by the build info “Raptor Lake-Px LP5 ERB”. That “LP5” in the name also indicates we are looking at LPDDR5-based system.

We actually don’t know what CPU this really is because it’s just called “Intel 0000” on the UserBenchmark entry. The software data, however, does reveal that this is a 14-core, 20-thread SKU with a base frequency of 2.5GHz and a boost clock of 4.2GHz. That maximum boost speed matches the current Alder Lake-P flagship: the Core i9-12900HK.

This is because UserBenchmark reports average clock speed rather than peak clock speed. That’s why you can easily find Geekbench entries of the i9-12900HK with similar clock speeds, but the base clock is 400Mhz lower here. Nevertheless, that’s why we are speculating this to be the Raptor Lake flagship, aka the Core i9-13900(H)(K) mobile CPU.

Coming to the benchmark itself, the Intel Raptor Lake-P mobile CPU achieved 202 points in the single-core test and 2,052 points in multi-core tests. That isn’t a very impressive multi-core score as it’s slower than even the current-gen Core i7-12700K, but again this could be due to the product being an engineering samples with early testing drivers.

However, the single-core is the highest we’ve seen on UserBenchmark. Because UserBenchmark is notorious for favoring AMD CPUs, we will not compare the performance of the leaked Raptor Lake component against any Ryzen CPUs, but rather to Intel’s own Alder Lake CPUs. Attached below are comparisons pitting the Raptor Lake SKU with a bunch of other Intel CPUs in its supposed class: 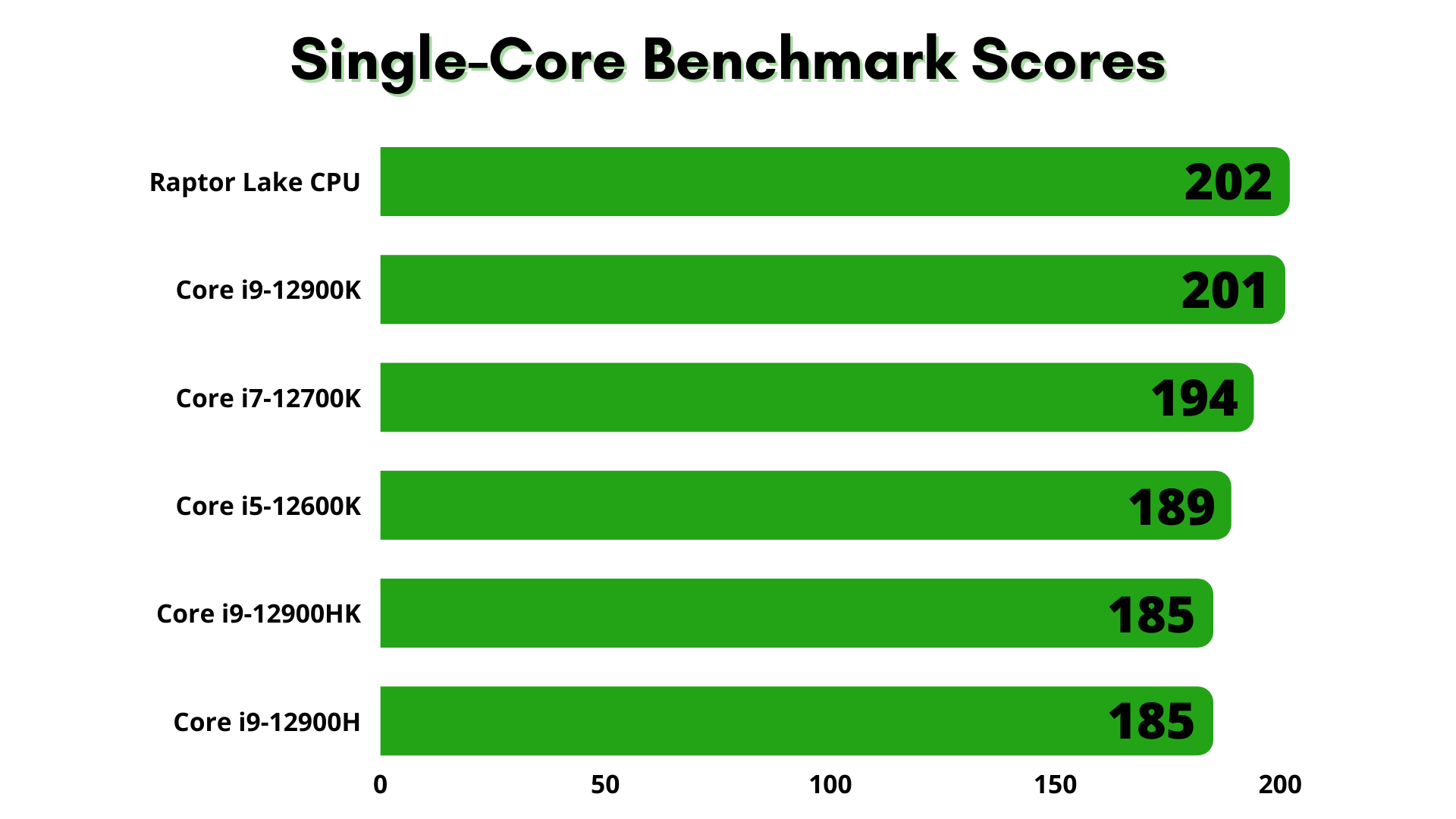 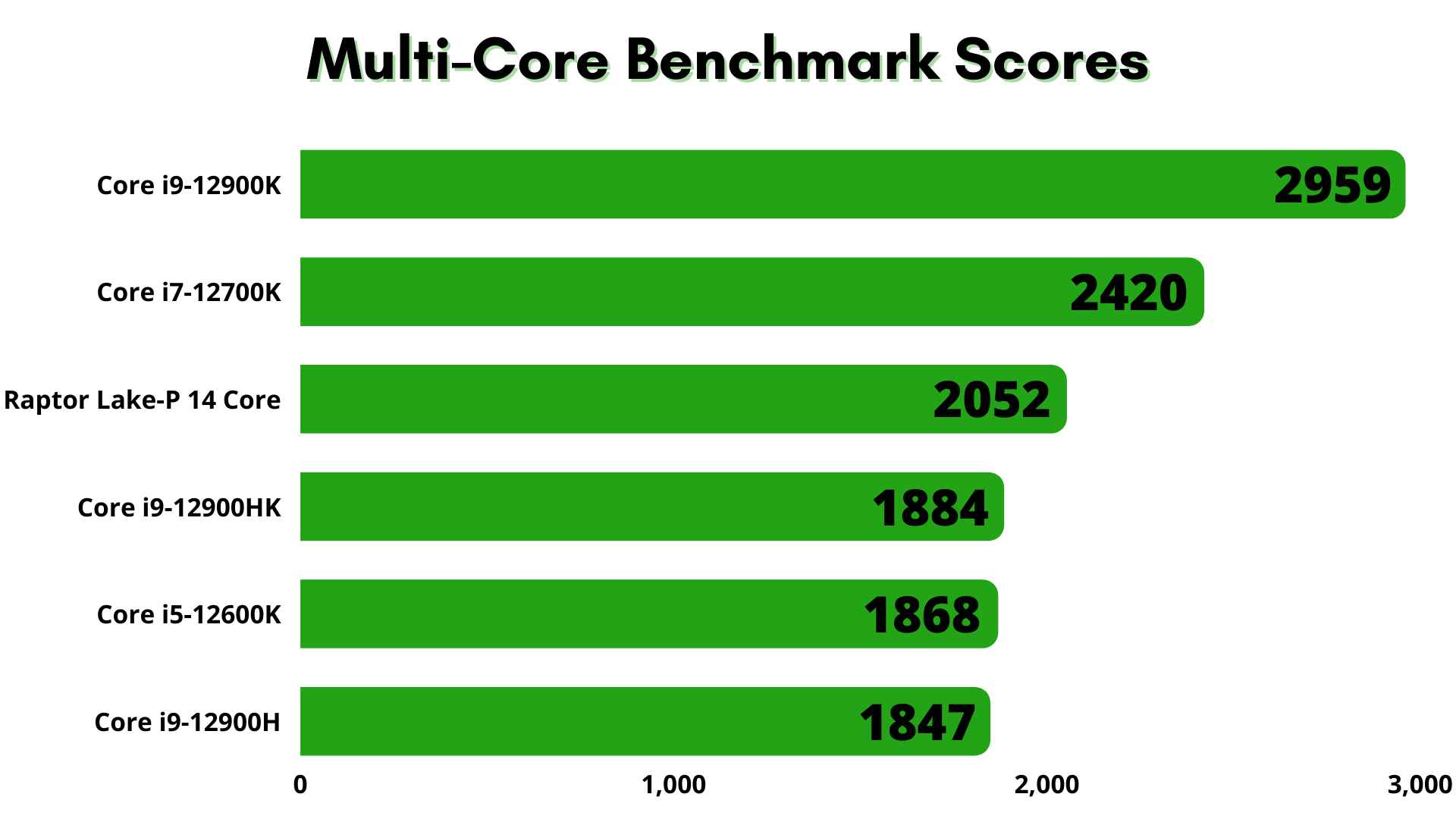 We’re unsure if Intel has similar plans for its next-gen mobile CPUs as it does for its next-gen desktop CPUs. Raptor Lake desktop is set to get a pretty substantial bump in maximum core count with the company doubling the max amount of Efficiency Cores in a SKU. Whether we’ll see this trickle down to the mobile series as well remains in question because we don’t know what Core processor we’re exactly looking at here.

The most interesting part here is that UserBenchmark results show that this processor is already quicker than its supposed predecessor, the flagship Alder Lake-P Core i9-12900HK. Again, we only say that this is the flagship Raptor Lake mobile SKU due to how close it is in performance to the 12900HK, and because Raptor Lake isn’t set to bring in major performance improvements in the first place.

Intel’s 13th Gen Core series for laptops is not likely to appear on the market until CES 2023, early next year. Intel has been preserving a one-year cycle for its laptop series for a time now, and this is likely to coincide with the arrival of the GeForce RTX 40-series mobile GPU. So, we could be seeing Raptor Lake laptops launch with NVIDIA Ada Lovelace mobile GPUs if both debut simultaneously.