Danger Zone 2 takes the action out of the simulation and into the real world, featuring improved mechanics and new game modes. Players can experience the thrill of the speed on the Freeways of the USA, the Motorways of the UK and the Autovias of Spain.

As seen in the gameplay video above, the game has much better visuals when compared to the first Danger Zone. Burnout 3 players will feel right at home as they speed down the highways in a variety of cars. However, players of the first game will quickly notice that the game lacks a vehicle deformation mechanic. For a game that is so inherently focused on crashes, a more in-depth damage system is something that is extremely important. 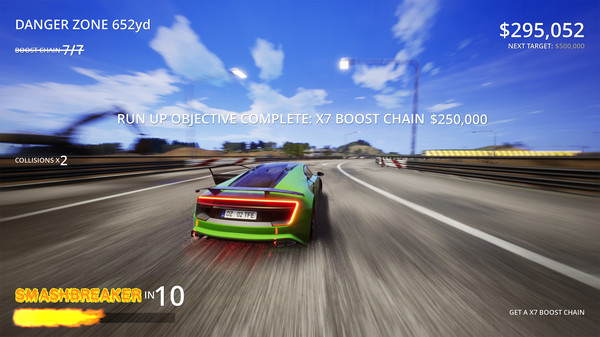 In Danger Zone 2, players can drive eight vehicles: including a Sedentary Sedan, a Chaotic Coupe, a Really Crazy Taxi, a Euro Truck and a Formula One car. The game also features a “crash for cash” mechanic which lets players compete against each other over who can cause the most chaotic crashes. Additionally, there is objective based gameplay which allows players complete goals to earn bonus cash in various levels.

Danger Zone 2 was released on July 13th on multiple platforms. The game is enhanced for Xbox One X with native 4k and 1080p 60 fps as well as for for PlayStation®Pro 4K with Temporal Checkerboard rendering and 1080p 150% super sampling. Danger Zone 2 is available on Xbox One, PlayStation 4 and PC via Steam.