According to Microsoft, the OneNote app that comes pre-installed on all devices running Windows 10 is built for the user’s convenience. However, the only thing the OneNote app was causing users early this September was inconvenience as, following a couple of rotten updates, the app had become one of the most unstable Windows 10 apps in existence. In most cases, the OneNote app would simply spew out error 0xE0000797 along with an error message almost immediately after being launched as it attempted to connect to the user’s OneDrive account. Once the program displayed error 0xE0000797, it would fail to start completely, and even if the user somehow managed to get the app to work, they would be unable to save anything to their OneDrive account.

This problem rendered OneNote entirely unusable for quite a significant percentage of Windows 10 users, which is why this matter was of the utmost urgency. Thankfully, Microsoft and its developers got wind of the issue quite swiftly and immediately started working on a fix, a fix that was delivered to consumers with the OneNote update that followed. However, some users’ OneNote applications did not get fixed even after the update and continued exhibiting this behavior and displaying error 0xE0000797. If the OneNote app on your computer still displays error 0xE0000797 upon launch, all you need to do to fix the problem is to uninstall it and then reinstall it using Windows PowerShell. To do so, you need to:

Type powershell into the Search bar.

Right-click on the program named Windows PowerShell that appears. Click on Run as Administrator. 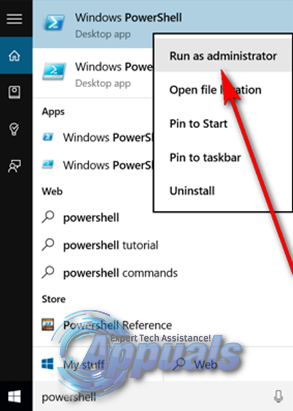 Type the following line of code into the Windows PowerShell dialog and press Enter:

As soon as you press Enter, Windows PowerShell will begin uninstalling the OneNote app. Wait for the app to be completely uninstalled.

To reinstall the OneNote app, type the following command into Windows PowerShell and press Enter:

As soon as you press Enter, your computer will be instructed to reinstall all missing default apps. Wait for this process to be completed, and you will have the OneNote app back in your Start Menu once it’s done all the way.