The error code 30180-28 appears when you’re trying to upgrade or install Office Pro 2016, and generally a third-party firewall is blocking the updates from fully downloading. The app in question may be a firewall or another security app, but until you fix that, you won’t be able to upgrade/install Office Pro 2016, and there is nothing that you can do. 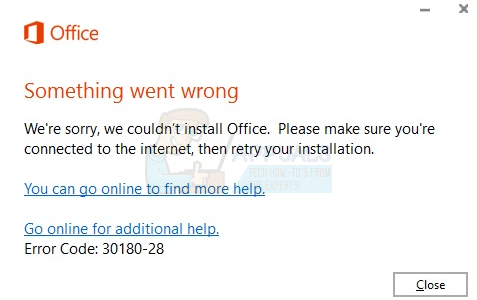 As you probably know, when you’re trying to run an upgrade or installation, getting an error code means that some of the files have failed to download or install properly. This specific problem appears with the 2016 version of Office, and you won’t be able to install any updates for it but it may also appear with other Microsoft products or versions of Office.

Create an Exception in your Firewall Software

The 30180 error code signals that a certain file isn’t being allowed through the firewall – so the logical solution would be to add an exception for Office in your firewall, and try upgrading again. This way, your firewall knows that it shouldn’t block Office, and you won’t be facing this issue. If you’re using a third-party firewall, such as Sophos, or something similar, you will need to look into the Settings to create the exception. If you cannot figure out how, then the best option is to temporarily disable any web blocker, firewall or third party security software until the app has finished installing or updating.

On your Sophos firewall go to Web Protection > Filtering Options > Misc and create exceptions in the Transparent Mode Skiplist as follows:

Even though you might think that this is an issue with Microsoft Office, which would in turn lead to frustrations and anger, it is nothing more than a firewall blocking files that shouldn’t be blocked, and by following the method above, you will fix that in no time.