Ever since NVIDIA originally announced the very first RTX 30-series GPUs back in September 2020, they have been notoriously hard to get a hold of. Not only because of the ongoing global chip shortage but also because of scalping due to a boom in cryptocurrency mining and weakened supply chains around the world. Point is, these GPUs were priced nicely but they were almost never sold at MSRP in actuality.

Well, today NVIDIA has returned to add salt to the wound. So far, external factors and third parties have contributed to these price hikes and scarcity but now the manufacturer itself is jumping in. NVIDIA has just silently raised the prices of almost all of its Founders Edition RTX-30 series GPUs. This increase only affects the European Union, but information suggests this could apply to the UK very soon as well.

The news comes courtesy of Videocardz who sourced this from the StockDrops Discord server where this was first discovered. The message on the server said that NVIDIA will increase the prices in both the EU and the UK. Regardless of the regions, this is quite odd. The crypto market is in shambles right now and we’re experiencing better general availability of GPUs all around so increasing the price at a time like this seems surprising.

Many of these increases don’t sound as bad, but when you actually put the percentage against the original prices, you start to see really how substantial these are. The RTX 3090 just casually goes up €100 which is a huge difference. And towards the lower end, the RTX 3070 going from €519 to €549 is a noticeable discrepancy that will certainly affect value-oriented builds that have tight budgets and where every dollar/euro counts. The following table shows the price increase in detail for each model, including the percentage increase. 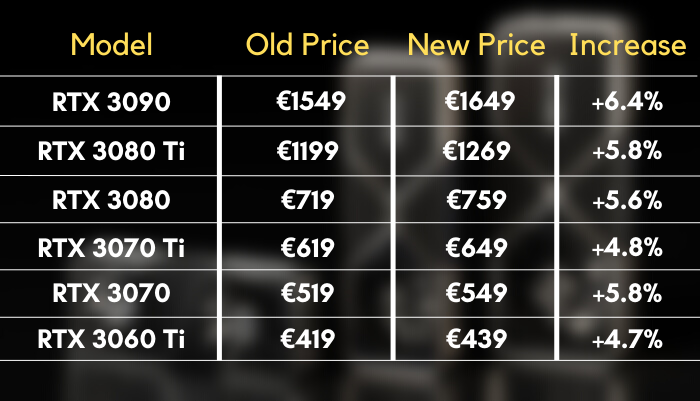 No one knows why NVIDIA did this and there seems to be no reasonable explanation at hand given the market’s condition. If anything, the prices should’ve fallen considering the contemporary crypto crash! In these times of uncertainty, the Founders Edition SKUs from NVIDIA were often the only way to get your hand on an RTX 30-series card at MSRP but now it seems like even that has been subjected to an anomaly.