Although the popular Nintendo Switch system’s replacement has not yet been formally shown, it has undoubtedly been in development for some time, given that it has been over six years since the device first hit the market. Although there isn’t much official information available, a recent leak may have revealed additional details about the SoC that will power the console.

According to followmeinblue, a Reddit user, the business has acknowledged the existence of the NVIDIA Tegra239 processor with a statement from a developer discovered on the Linux Kernel Mailing Lists. Additionally, the remark verifies that the chip will have an 8-core CPU. 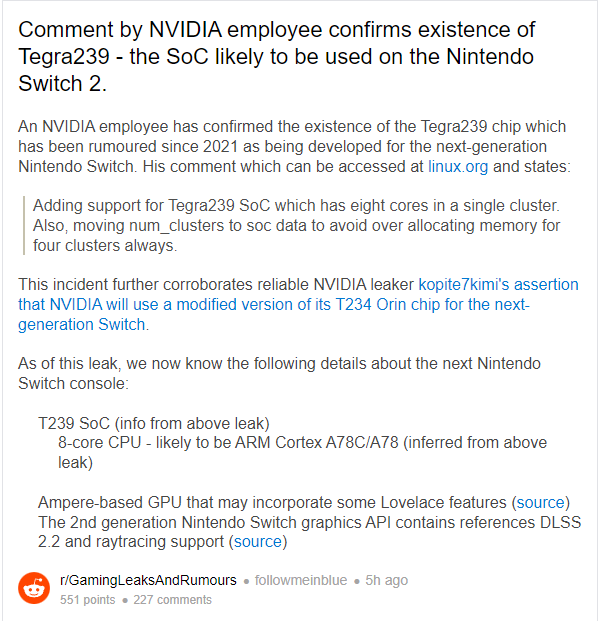 Although not very significant, the leak is noteworthy because it supports the information provided by reputable leaker @kopite7kimi that the Nintendo Switch successor would feature the T239 chip, a modified version of the NVIDIA Orin Chip.

The T239is based on the Ampere architecture and has a CPU with 12x ARM Cortex-A78AE cores and a GPU with 2.048 CUDA Cores. The second generation Nintendo Switch graphics API mentions NVIDIA DLSS and ray tracing, which are both expected to be supported by Nintendo’s next device.

It should be noted that Nintendo continues to be famously secretive about its hardware. There isn’t even the slightest indication of what the Japanese video game developer has in mind to replace the Switch. For all we know, a revamped Nintendo 64  may debut before a Switch 2.

Following the base model’s release in 2017, Nintendo released multiple system revisions, including the Lite model and the OLED model, which come with better battery life and screen than the base model. However, no significant hardware change took place which had undermined Switch’s potential.

It would be fascinating to see how Nintendo chose to compete, given that Valve’s Steam Deck dominates the handheld console industry with top-tier performance. Doing so would need a significant increase in technical specifications from earlier versions.