A week ago we reported that Nvidia might produce GTX 11 series cards, specifically the GTX 1160. Today, these reports have been confirmed by multinational tech company, Lenovo. Lenovo’s website contains a listing for two upcoming laptop’s which include a GTX 1160 variant. The laptops are named Legion Y530 and Legion Y7000P respectively. 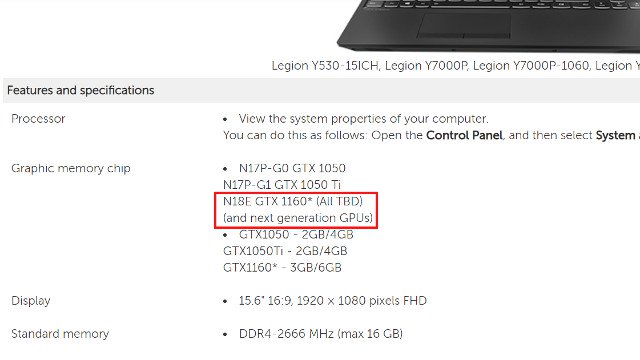 As we already know, the GTX 11 series will be running the new Turing architecture, replacing the old Pascal architecture. But it will not include any of the high-end ray tracing technology, keeping that exclusive to the RTX series GPU’s.

Like mentioned previously, the GTX 1160 will be running on the Turing architecture, but will not include any of the high-end ray tracing features, Instead it will reportedly feature “Turing Shaders”. Even though the  GTX 11 series will be featuring Turing GPU’s, there is a difference in the model numbers of the GPU’s. The RTX 2060 will feature a TU106-200 GPU, while the GeForce GTX 1160 will feature a TU116 GPU.