For starters, the GUI has been given a general makeover with a package named Neptune Dark, which includes a modified icon pack called Faenza Dark, which is made for dark themes in mind. 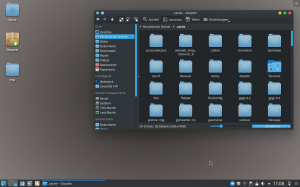 Hardware support was also increased by updating to Linux Kernel 4.16.16, which should address some drivers and bugfixes. Some other notable updates in this latest version include KDE Frameworks being updated to version 5.48, and KDE Applications updated to version 18.04.3. However, because he new KF5 version is incompatible with Qt 5.7, the Neptune OS developers needed to backport its patches to 5.45.

As for software and app updates, VLC was updated to version 3.0.3 which should be generally much faster, with many bugfixes. Thunderbird 52.9 should fix issues with encrypted HTMLT emails, and the new Excalibur menu is available in its version 2.7, which fixes bugs regarding to multiple activities and shifting around your favourites.

The default window manager for Plasma, named KWin, was updated to version 5.12.5 which was adjusted to be compiled against Qt 5.7 – users should see verifiable performance improvements, as well as nicer screen effects and better overall hardware support.

LibreOffice was updated to version 6.0.6, and the Neptune OS devs fixed an issue with MTP causing issues when trying to share files to Android devices over an MTP connection.

Finally, Enlightenment 22 was made available in version 0.22.3, together with Terminology 1.2.1

The full changelog for Neptune OS 5.7 is as follows: