Battle royal titles can be said to be dominated by a gaming scene. More and more people are playing this kind of game. Fortnite has gained his faithful audience quite quickly, because of the very interesting style of the game, and also because this game is free.

In order for a game to gain global recognition and global popularity, it is expected to flood the Chinese market.
The picture below is a tweet that appeared, and which clearly shows the Fortnite passport with a Chinese seal on it, and there is a date clearly marked on April 23. 2018. This could mean that the fans of this game in China could play this game and that too next week.

Just as Luke Winkie recently said, “Fortnite may dominate the battle royal scene in the west, but it’s not on top of the world. And it will not be, as long as it has no presence in China.” 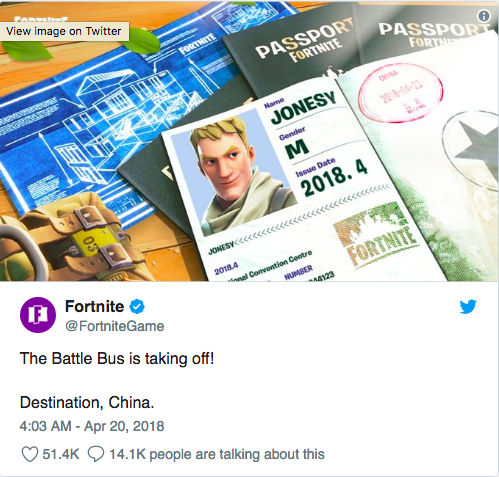 What we also know is that China is a very large and very profitable market, but it is quite difficult to break into it successfully. The only problem that can be a standstill in the success of this game is that the console presence in China is much smaller compared to Western countries. PUBG managed to dominate China, so why Fortnite do the same domination.

Fornite May Hit China on the 23rd of April