Earlier this week, Intel announced their upcoming Arc Alchemist GPUs along with unveiling “Arc” as the brand that will cover all graphics hardware, software, and services from Intel. This will be Intel’s first legitimate foray into the realm of discrete GPUs. In the announcement, Intel also teased that their super sampling tech was in the works which would rival Nvidia‘s DLSS 2.0 and AMD‘s FidelityFX Super Resolution. Intel’s Vice President Of Graphics Research, Anton Kaplanyan even tweeted that their super sampling solution deserves a separate announcement and that’s exactly what we got today.

Today at Intel Architecture Day 2021, Intel lifted the curtain on some of its biggest upcoming releases including the Alder Lake CPUs, and more details on its Alchemist GPU SoCs. Also revealed was XeSS (Xe Super Sampling), the official name of Intel’s super sampling technology. Before we talk about that, let’s first go over the basics of what powers the Alchemist GPUs.

First and foremost, “Xe–Cores” are the building block of an Alchemist GPU. A Xe–Core is essentially Intel’s equivalent of Nvidia’s SM or AMD’s CU. I won’t dive into much detail here as there are many articles you can find online that explain the inner–workings of this. AnandTech and Extreme Tech have two wonderful articles exploring the Xe–Core and what makes it so special. For now, all you need to know is gone are the EUs (Excecution Units) and the new Xe–Core is its replacement.

So, the DG2–128EU and the DG2–512EU will have 128 and 512 Xe–Cores respectively. Each Xe–Core also has a dedicated ray tracing unit inside it for hardware–accelerated ray tracing. And, as we discussed in our Intel Arc announcement article, Alchemist GPUs will be based on the Xe–HPG (High Performance Gaming) architecture. Lastly, the Alchemist SoC will be fabricated on TSMC’s N6 node which offers density improvements over the 7nm process node, but isn’t quite as power efficient as the coveted 5nm node.

Now, that you’re all caught up to speed let’s see what this super sampling fuss is all about. Intel XeSS is an AI–based super sampling technology that uses neighboring pixels and frame history sent to a neural network to upscale the image without a noticeable difference in quality. The neural network uses deep learning to identify the detail in the nearby subpixels and then reconstructs the image in an upscaled resolution. This execution is very similar to DLSS where Nvidia also harnesses the power of AI to achieve an upscaled image. 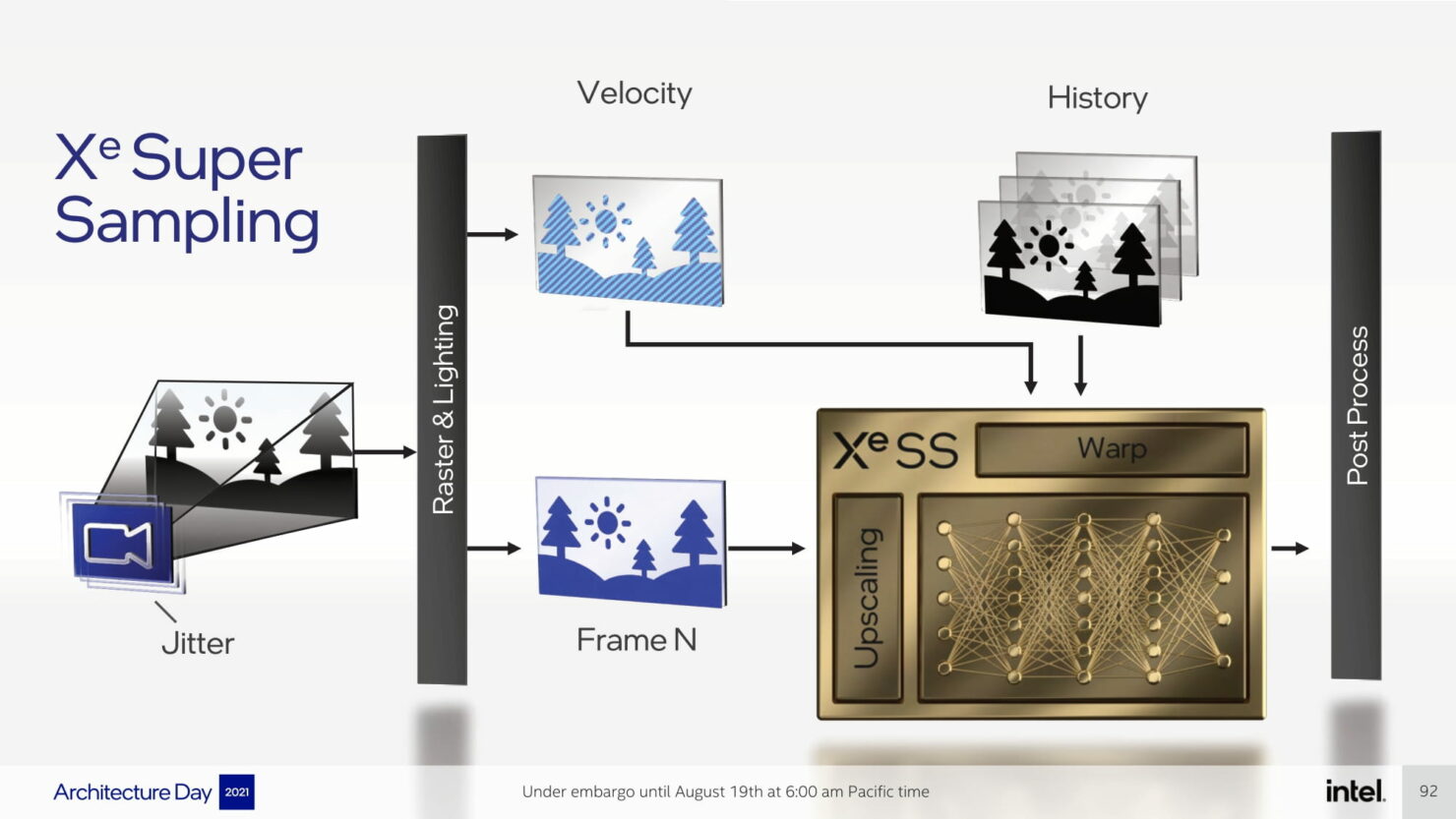 XeSS is also going to be opensource, much like AMD’s FSR. But, there are going to be two different versions of XeSS. The first and superior version is going to run on XMX (Xe Matrix eXtensions) matrix engines found inside Intel’s upcoming Alchemist GPUs. The GPU will use matrix math to power the upscaling tech, in turn, making it hardware–accelerated. That’s why the best XeSS results are going to be seen on Intel’s own GPUs.

The second version is the one that works on the DP4a instruction set. DP4a is found in most modern GPUs which means that XeSS is going to run on “competition” graphic cards as well. This is an approach similar to AMD who have also made FSR compatible with Nvidia GPUs. But, you can probably see that Intel has gone for a hybrid approach to achieve the best of both worlds.

Whereas Nvidia’s solution is completely proprietary and can only run on their RTX 20 and 30 series cards, AMD’s is not. This is because DLSS requires Tensor cores and they are only found in, well, Nvidia’s own GPUs. AMD relies completely on software to upscale the image so their FidelityFX Super Resolution works on both AMD and Nvidia GPUs. This has its perks and downsides, of course.

A software only method allows FSR to be much more accessible and easy to implement, it can work on GPUs from both the red and green teams and, most importantly, it’s open source. The downside is that because there is no custom hardware involved, the upscaling isn’t as effective and doesn’t produce results as convincing as DLSS. Moreover, DLSS uses the Tensor cores inside for temporal upscaling whereas AMD uses only spatial upscaling. Therefore, DLSS can work with a lot less data and produce better results than a software–based spatial upscaling solution.

This is where Intel has seen an opening and struck the perfect balance. XeSS works with both custom hardware designed to boost its effects i.e., XMX on Alchemist GPUs, and rival GPUs through the DP4a instruction set. Intel also takes into account motion vector data, just like DLSS, and uses temporal upscaling. So, in the end, the results are better than a software–based solution yet it can work on both Intel’s own GPUs and the competition’s  (granted the quality won’t be as good as with XMX). Best of both worlds.

To support their claims, Intel brought a demo to their Architecture Day as well. Intel showed a bunch of in0engine footage running in Unreal Engine. Cleverly enough, everything they showed was very slow–paced which gives the footage an extra sheen of goodness. What I mean is that due to how XeSS uses AI–based temporal upscaling, it should have a significant advantage over AMD FSR as fast moving objects and motion are better handled when taking motion vector data account. But, Intel chose to not show any fast–paced footage, the very thing that is objectively better with temporal upscaling.

As you can see, Intel has some pretty bold claims. They say that XeSS 4K (1080p upscaled to 4K) is as good as native 4K. That is something that even Nvidia doesn’t claim so Intel has definitely shot for the skies. And the demo speaks for them. The detail is stunningly close (and the text is actually clearer on Xess 4K!) and it’s a surprise that Intel is this far in the development of XeSS already. This is even more promising when you consider that this is running on preproduction silicone. Though, this demo was shown in a controlled environment with every variable in favor of Intel so it goes without saying that we’ll need to test this for ourselves once Alchemist finally launches next year.

Lastly, remember how I mentioned that XeSS is open–source? Well, Intel will launch the SDK for the XMX version of XeSS later this month with the DP4a version coming later this year. Intel also confirmed that support for popular APIs popular and engines, such as Vulkan, DirectX 12 Ultimate, Unreal Engine and Unity. Intel also said that Unreal Engine 5 is already working on their preproduction Alchemist silicone. A potential reason behind why Intel has decided to opensource XeSS is because they will be starting from 0% market share so allowing their tech to run on rival GPUs can build up credibility. 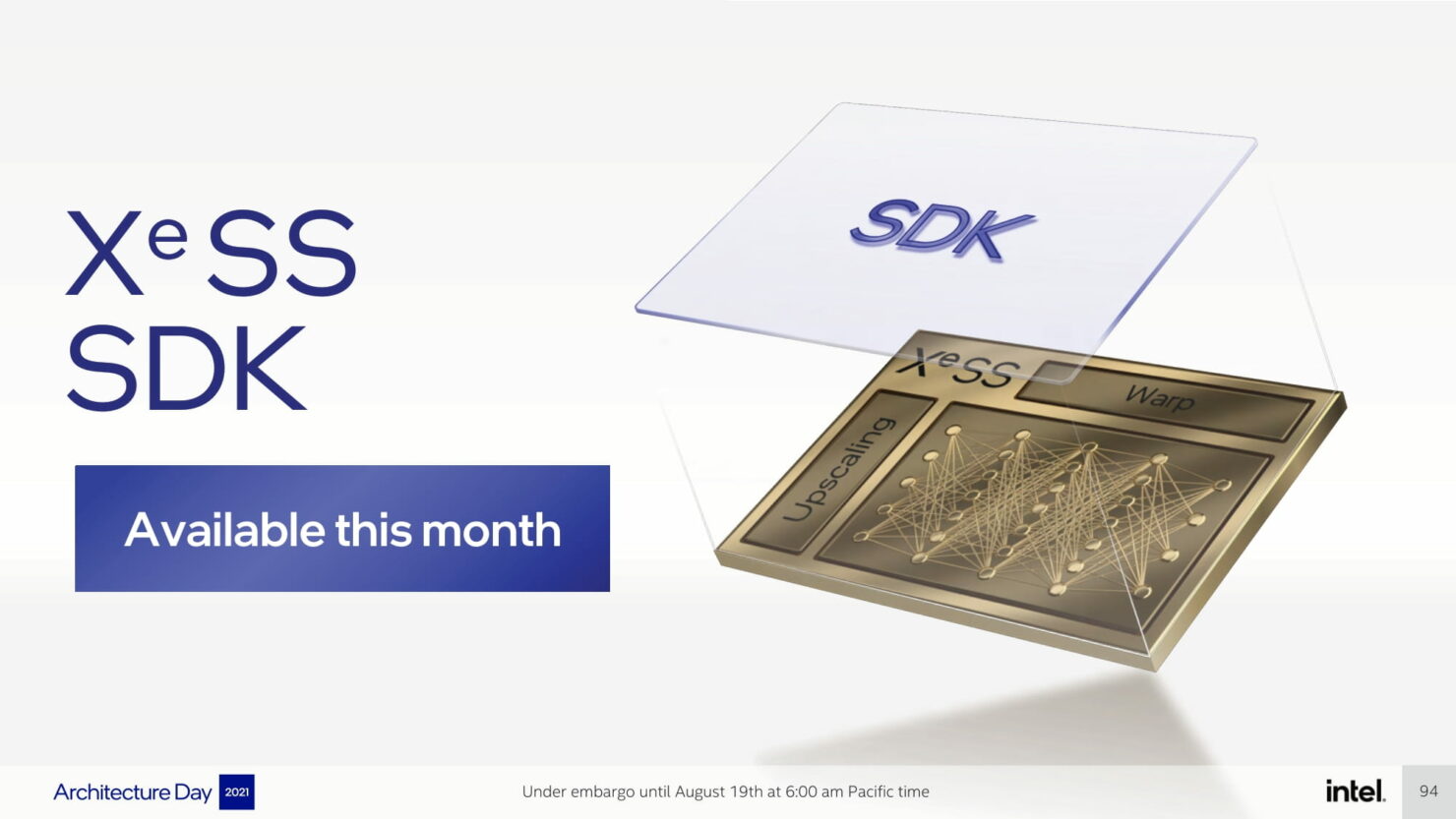 There is still a lot we don’t know. No TDP, no memory clocks, no pricing and also no design reveals have been made so far. Obviously, Intel is going to slowly pan back the curtains on all of this. Even though we know a lot about the Alchemist SoC and XeSS now, Intel is planning to unveil more in October. Intel will hold a tech conference on October 27–28 where they’ll give us an insight into their current and future technologies, which means expect to hear more about XeSS and Alchemist really soon.

Architecture Day 2021 showed that Intel is getting aggressive. They know they’ve stagnated in the past few years so they want to get back on track and be more competitive than ever. Their slate of products and technologies are looking promising and I am excited to see Intel being a genuine threat to AMD, Nvidia, and Apple. XeSS is just one piece of the puzzle and if they hit the homerun with this one, no one will doubt Intel’s expertise in graphics anymore.

But, remember, Nvidia wasn’t able to make DLSS the industry–standard it is today up until it tried for a second time, and FSR, well it’s just not as good. So, Intel’s best–of–both–worlds venture in the world of upscaling technologies is sure to be interesting one.

Step Aside DLSS and AMD FSR, Intel XeSS is Here To Super–Sample Your Pixels