As we await AMD’s announcement of its next generation of Ryzen CPUs coming very soon, Intel’s forthcoming lineup of desktop processors has also been leaked to oblivion. By now, we know nearly everything about the 13th Gen Core series, aka Raptor Lake. While it’s not exactly clear when the company will reveal these chips to the world, we can expect them to be right around the corner given the prevalent leaks and reports floating around town.

And today is no different. While we don’t have a leak to look at this time around, it’s actually something official (and thus not as exciting), there’s still a lot to be extracted from this. Benchmarking and diagnostics platform, SiSoftware has just posted a performance benchmark comparing Intel’s hybrid architectures versus their old, standard design (11th Gen).

You’ll notice I said “architectures” plural, that’s because SiSoftware somehow got their hands on an early sample of the Core i9-13900 and put it to work inside their Sandra software. All in all, the company took results from its Sandra database for Intel’s Core i9-11900K, Core i9-12900, and of course, the Core i9-13900, and threw in a Ryzen 9 5900X for good measure as well. Here are the results: 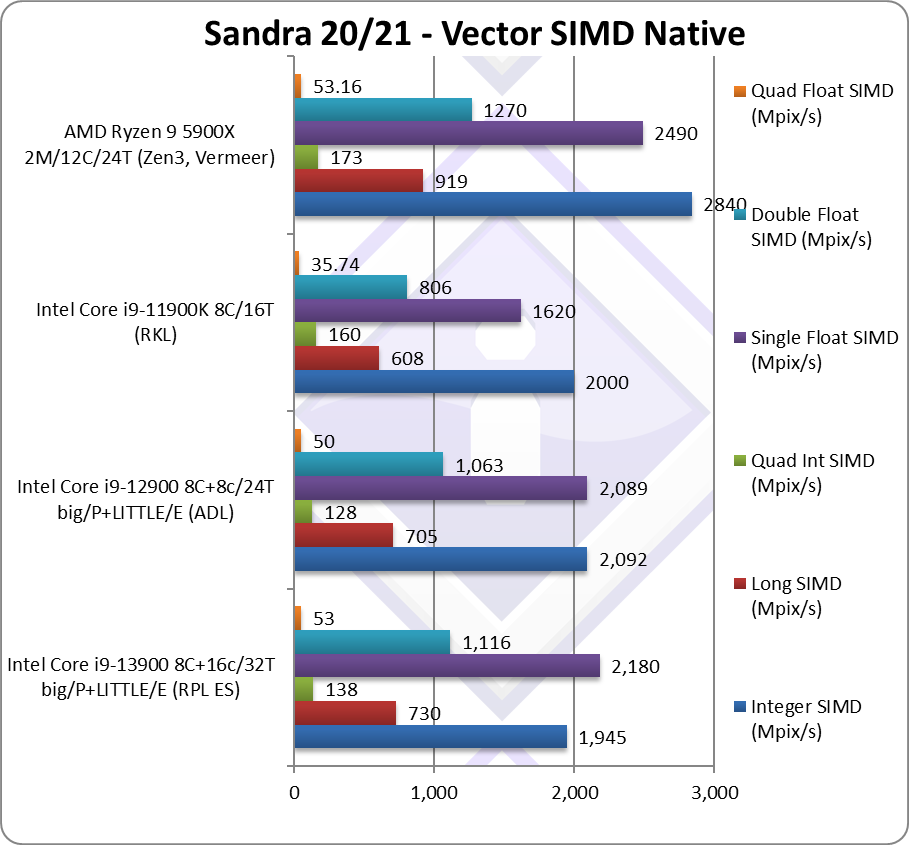 Now, before I breakdown these findings, I should first make it clear that SiSoftware Sandra is not your typical hardware/software diagnostics tool. It’s a bit more complex and the results you get out of it are not comparable to other benchmarks.

In the pictures above, the numbers you see attached to each CPU are pulled from SiSoftware’s own Sandra database, so take this as more of an indicative test rather than an actual performance review. Regardless, this gives us a nice little preview for what’s to come.

As for the CPU itself, SiSoftware spilled the beans on that front too.

Thanks to their digging, it’s all but confirmed that the Core i9-13900 will be using Raptor Cove E-Cores (Efficiency) and Gracement P-Cores (Performance) in a 8+16 configuration. So, eight P-Cores and sixteen E-Cores, making the total core count 24-cores and 32-threads (the E-Cores lack hyperthreading).

Massive improvements have been made when it comes to cache counts with Intel doubling the L2 cache to 32MB. The L3 cache receives a 20% bump, taking it to 36MB to deliver a total of 68MB of what Intel calls “Gaming Cache“.

Furthermore, in the testing, the 13900 was running at maximum boost speeds of 3.7GHz for the P-Cores, and 2.76GHz for the E-Cores. Not only is that significantly lower than the Core i9-12900 (5Ghz & 3.8GHz), but also the leaked retail clock speeds for this CPU. And that’s what makes the following results even more impressive.

Coming to the benchmarks themselves, the Raptor Lake CPU performs quite well. The biggest difference here can be seen in the Whetstone Single FP32 test which puts the Core i9-13900 over its predecessor by up to a 50% margin. Moreover, the 13900 gains nearly a 2x lead against the i9-12900 when it comes to Whetstone Double FP64 tests, as well.

The i9-13900 emerges victorious against both its predecessor and AMD’s current mainstream flagship, the 5900X. However, since this was non-SIMD territory, Intel enjoyed a comfortable lead. Moving on to the SIMD workload segments, we see the Core i9-13900 take a hit in its domination.

Aggregating all of the tests in the vectorized benchmarks, the Core i9-13900 is no longer the fastest kid on the board, but it’s still at least faster than the i9-12900. The original 33-50% margin has now trickled down to just 5-8% when it comes to SIMD tests.

In fact, the Core i9-11900K actually beats both the Core i9-13900 in the Quad Integer test and edges the 13900 in the standard Integer SIMD test. This is thanks to the AVX-512 special instruction support present on the 11900K that either of the other chips lack. That being said, AMD destroys all Intel CPUs in this segment by a large margin, something that they could extend even further with Zen 4’s AVX-512 capabilities.

The Core i9-13900 is already looking impressive in its ES state which is a great indication that the final release will be even more performant. The biggest accomplishment here is that the 13900K posted a 33-50% uplift over its Alder Lake counterparts, but with much lower clock speeds. As for vectorized tests, the 5-8% improvement is not nearly as impressive but still appreciable.

The increased L3 cache at 36MB and the massive combined L2 cache at 32MB has given Intel enough headroom to overtake AMD…’s current-gen chips based on Zen 3. Now, with Zen 4 and second-gen 3D V-Cache tech right around the corner, the Read Team will surely extend its lead further, which would negate Intel’s counter-efforts in this segment. But, alas, it’s a good effort nonetheless.

We should be hearing more about Raptor Lake in the coming weeks as more and more leaks pour in, giving us a better idea of the lineup’s performance. As always, basing your conclusion off of just one or two sources is not good practice. Therefore, wait for more reports to come out to truly evaluate Intel’s next generation of CPUs.