You can easily get a CPU chart right from the Linux command line. While there are plenty of graphical process tools that you can use with various Linux distributions, you’ll find that the command line ones work well enough as it is. They’re snappy and feature a light footprint. GUI tools offer a familiar interface, but the system load they create can tamper with the readings somewhat. A single command might be all you’ll need to examine the load on your system.

While you won’t need root access, you will need a terminal to work from. Search for the word terminal on the Ubuntu Unity Dash or hold down Ctrl, Alt and T to get started. You might also want to click on the Applications menu, point to System Tools and click on Terminal. Once you’re at the prompt, you’re ready to begin.

If you want to put the least amount of strain on your machine while consulting a CPU chart, then you’ll want to type tload and push enter. This will display a dynamically-updated graphical representation of the current system load average right to your terminal. Once you’re inside the program, you don’t have to worry about any options or anything of the sort because there aren’t any. You simply hold down the Ctrl key and push C to exit the graph. You can allow it to run for as long as you’d like. 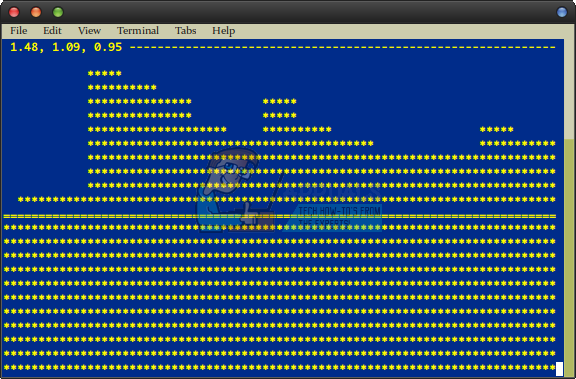 If you find that the default graph moves a bit too slowly for your tastes, then you might want to try the -d option. Type tload -d 1 to have the graph updated every single second, which should be fast enough for most uses. You can set it to a higher number equal to the number of seconds you’d like to delay between each interval as well if you’d like. This single command is

enough to get a pretty good window on your processor’s share of the heavy lifting. Eventually the number of horizontal lines will grow longer than whatever you have your terminal set to. For the vast majority of people, this process won’t take very long. The tload app will start to scroll lines to the side as soon as you’ve reached this point.

Sometimes it can be useful to pop up a graphical chart in another window that you can move around your desktop. While the xload app will function like any other graphical X Windows application, it still won’t put all that much strain on your system. Even though tload is much lighter, xload is still many orders of magnitude lighter than many programs. Type xload -nolabel & and push enter to start the software. You’ll have a floating window that features a graphical CPU chart, but it still won’t absorb too much power from your system thus keeping the readings fairly accurate. 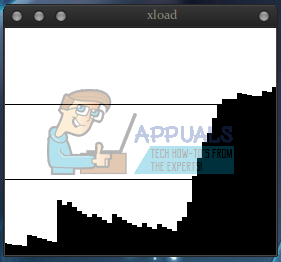 Once again, you can speed up or slow down the rate at which the chart updates. Try typing xload -nolabel -update 1 & to get the program to update the CPU chart at a speedier one second clip like you had done with the tload app above.

Should you find that the CPU chart looks weird when it fills up a full window, add -jumpscroll 1 to the end of the command before the ampersand to make it potentially scroll a bit more smoothly. In either case, users of GNOME, Xfce4, KDE and other desktop environments might notice that the window controls appear switched off for the window. Don’t worry about this, because you can still click on the close button even if the color changed to close out the window. You’ll notice in your terminal that you’ll get a message that reads something like [1]+ Done xload -nolabel -update 1 the next time that you push enter at the prompt. This is an acknowledgement that you closed out your CPU chart.

While the xload app won’t work if you’re running from one of the virtual terminals you can access by holding down Ctrl+Alt+F1-F6, the tload app will work perfectly fine run this way. This makes it ideal for running from headless Ubuntu, CentOS or Red Hat servers.

How to View a CPU Chart in Linux