Snapchat is one of the most commonly used phone application and has been gaining a lot of attention by many. Users make videos and click pictures with Snapchat which offers a huge list of filters which are enjoyable for any person. Since we all know that the videos and pictures don’t stay there for long like other applications e.g. Instagram. This makes it more troublesome for anyone to save these videos on their device.

The following are a few tricks that you might want to give a try to save videos sent by others. But before that, learn how you can save your own Snapchat videos that you recorded from Snapchat.For newbies it might be a little confusing, so here is how to go about it.

How to Save Your Videos on Snapchat:

Record them first, of course!
The very first thing that you need do is make a video from Snapchat. You can do this by pressing the centre transparent button until it is red, that is the video mode for Snapchat. Earlier, you had to keep that button pressed for making a video, but now you have an additional feature that helps you lock the video mode on, while you are making a video. This way, you don’t have to hold on to the button for long. 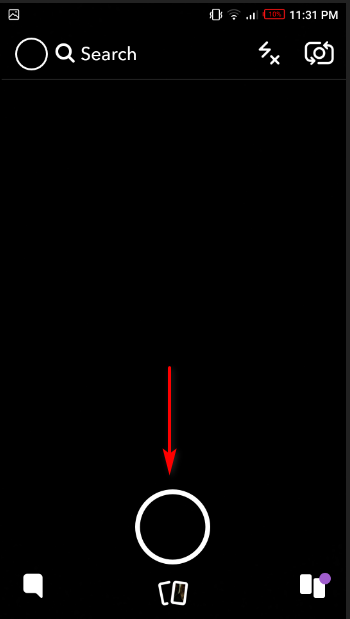 transparent icon for recording a videoArrow Button on the Bottom Left
Once the video has been completed, you can now download the video. On the same screen, you will find an option which will be in a downward facing arrow. If you tap on it, you can download the video. You can be sure about whether you tapped that icon or not when it shows the word ‘saving’. That means you did tap it right. And after a while, the word ‘saved’ appears, which means that your video has been saved.

Saved in Memories
You can access the video which is saved in your phones gallery or photos. If you want to access it through the app, you can simply press the memories icon,that is right under the big transparent photo/recording icon of Snapchat’s home screen. The pictures or videos under the heading memory, are the ones you clicked from your Snapchat, while the ones under camera roll are the ones clicked from your phones camera or other apps.

How to Save a Video After Posting Your Story

Saving videos that you have made from your Snapchat is a piece of cake. The bigger problem is when you have to save a video someone else sent you, because all the Snapchat videos/pictures are ghost posts which disappear after a while. But, people often forget to save their own videos when the make it before sending it to their friends or putting it up as their story.

The good news here is, that if it was a story, and you forgot to save it, you still have a chance to save it by following the steps below:

TA-DA! You just saved your snaps! Now moving on to the difficult part of Snapchat. Saving the ghost videos sent by other people which cannot be saved directly from Snapchat.

Ways to Save Videos On Snapchat from Others

The idea of ‘Snapchat’ which makes it unique is that the videos and photos on Snapchat disappear after a while. And, in addition to this, Snapchat does not offer any way of downloading the images or videos posted by others. You can screen shot the images, but the person, whose pictures you are screen shot-ing , will be informed that someone took their screen shot. And I am sure no one likes getting caught while they are stalking someone. (lol)

For the video snaps however, we have a few tricks that might just work for you.

Major love for reading, but writing is what keeps me going. Dream to publish my own novels someday.
Social Media
Back to top button
Close
Close
Close