Random Access Memory (RAM) generally refers to the technology that provides devices with a volatile area to temporarily store data. This technology is used across all form factors of digital electronics, and its mere existence is a memory to no one who has worked with computers or cellular phones for very long. On the other hand, the actual contents of said memory is very often a mystery. Most operating systems provide no way for a user to easily examine the contents of RAM.

A simple Linux CLI trick can at least help a coder to examine the lower areas of RAM for useful messages. This is helpful for several reasons. Programmers and operating system developers may want to see how many BIOS or UEFI remain inside of a live OS boot. Other coders may also want to see what locations in RAM a program writes too. Some users could do so for troubleshooting reasons, or even purely out of curiosity. Fortunately there is a safe way to do so.

First you will need to open a terminal by holding down CTRL, ALT and T. You may also start Konsole, rxvt or any other terminal program from your applications menu. If you want to work with a larger screen, then you may hold down CTRL and ALT while pushing F1-F6 to log into a virtual terminal. Theoretically the following commands should also work on other Unix distributions like FreeBSD.

At the command prompt type:

If it warns you that you lack permissions, then type:

You’ll need to enter your administration password. If you received a message that told you that the programs ‘strings’ could be found in a package, then try: 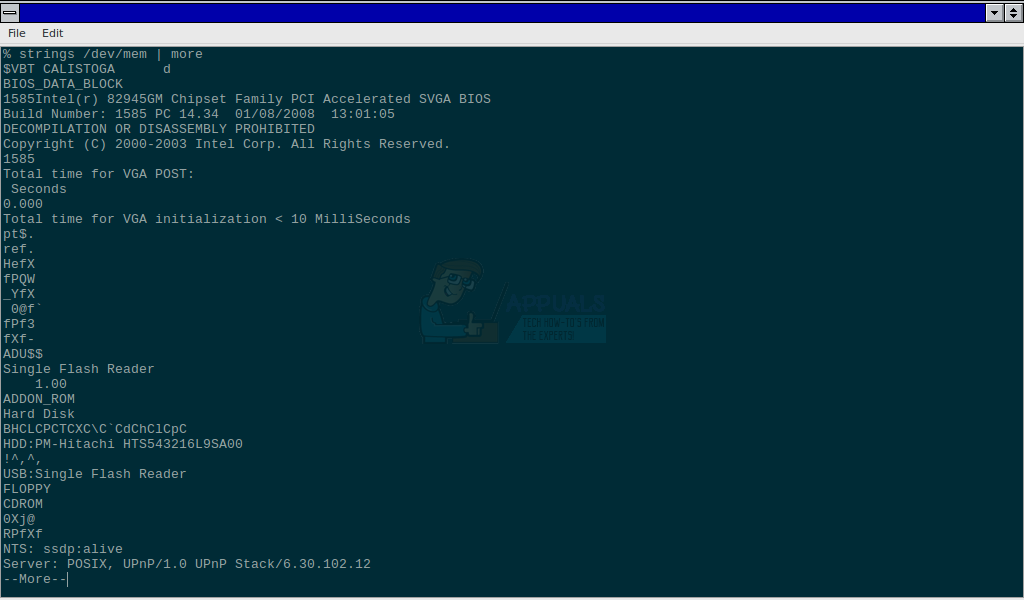 Once it’s been correctly parsed you’ll see a wall of text separated by lines. Pushing the space bar will drop down another screenful, so you may wish to use less instead of more in the pipe. You’ll more than likely see a good deal of garbage, but at least some of the messages will be useful. Since you might have many gigabytes of RAM attached to your machine, you’ll eventually want to hold CTRL and push C to exit.

If you’re on a legacy-free machine and still see messages about a floppy controller or a CD-ROM drive, then you have nothing to worry about. These are just messages from your BIOS or UEFI program.

How to Read Messages Stored In RAM on Linux