With the official launch, a bunch of new content was added in today’s update.

The season one battle pass is now available for $5.49 USD. Players can unlock up to 30 reward levels across 3 different paths, free, premium and PS Plus. Free pass is available for all players, PS Plus line is granted to all PS Plus members, and the premium line must be purchased. The progression system is similar to other games such as Fortnite, and level progression carries over between paths. 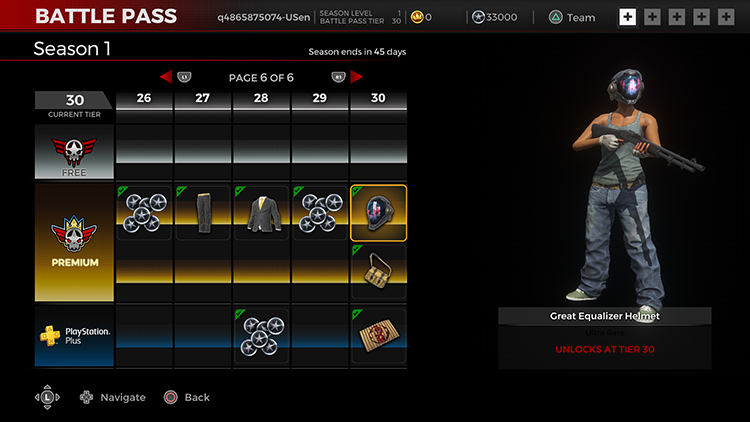 In addition to cosmetics, two new weapons have been added: the RPG and the SOCOM Sniper Rifle. The RPG is highly effective against vehicles and can be found in gold tier airdrops. On the other hand, the sniper rifle is found in purple tier airdrops and can take out enemies at a range.

The ARV is a new vehicle that can seat up to five people. Passengers can pop out the hatch and fire their weapons for an action packed gameplay experience.

The H1Z1 Viper Starter bundle and Hardline Deluxe bundles are now available for $4.99 USD and $34.99 USD, respectively. The Viper bundle offers a variety of customization options and the Hardline bundle includes the Premium Battle Pass. Both bundles are on a discount until September 4th on the PlayStation Store.

“Everyone here at Daybreak Games is thrilled with the overwhelmingly positive response to H1Z1’s debut on PS4,” said H1Z1 Producer Terrence Yee. “Ten million new players in our first month in Open Beta is an incredible milestone, and our entire development team has worked tirelessly to build on that early success. We’re beyond excited to officially launch H1Z1 on PS4—this is our fully realized vision for battle royale on console.”

Daybreak Games have done a great job porting their popular PC title to a console. Throughout the beta, regular updates and open communication with fans have resulted in a great battle royale gameplay.