PC market research shows that while mining still has an impact on graphics cards sales it is withering away and the shipment of graphics cards is declining. Miners that needed graphics cards already have then and PC gamers are not buying graphics cards due to the high prices. But prices are coming down now due to the increase in supply as compared to demand. Here we are going to have a closer look at the state of the graphics cards market.

The research reveals the change in market share and shipments of Nvidia, AMD and Intel and the highlights of the study are as follows:

According to the numbers AMD market share increased as compared to previous quarter, while Intel market share declined and Nvidia held its ground with no change. The numbers are included in the figure below. 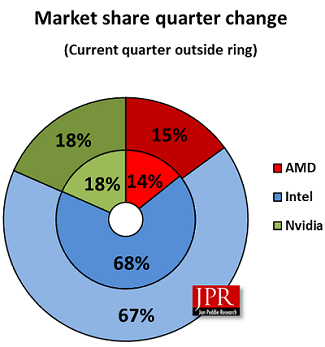 Nvidia and AMD predicted a decline in graphics cards sales and this might be what we are looking at here. For more information regarding the graphics cards market stay tuned.