Digital assistants have been becoming smarter and smart speakers aim to bring them into our homes without having to pull out our smartphone everytime we need to check out something. Google Home and Amazon Echo are two such smart speakers that have been increasingly popular over the past year or so but Amazon has always had the edge, until now.

According to statistics, smart speakers saw a growth of 210% in the first quarter of 2018, which is a huge number. It has been the first time that Google Home has been able to overtake the Amazon Echo devices.

Google Home Mini alone accounts for 3.2 million devices. On the other hand, Amazon has sold 2.5 million echo speakers. Google grew 483% year-on-year and Amazon only increased sales by 8%. You can find some useful numbers in the figure included below. 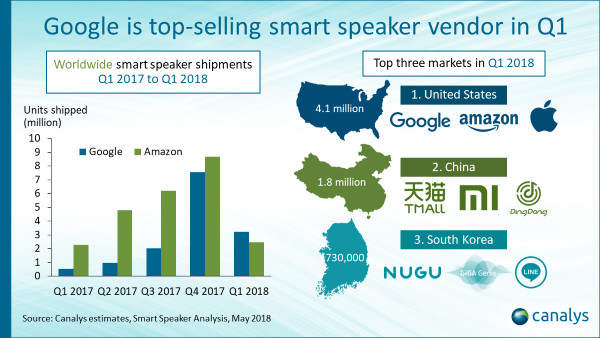 The US market dropped by 4.1% but this is due to the fact that both Google and Amazon have their own digital assistants and that both are reaching out to different countries across the globe including India. Competition is also there from countries like China and Korea. In China alone, 1.8 million smart speakers were delivered in Q1 2018, making it the second largest sales market after the US. South Korea comes in at third place with 730,000 units delivered.

People are showing interest in these smart devices and they are being adopted at a fast pace. Which is great for business for both Google and Amazon. While Google Amazon and Apple dominate the market in the Us, it is worth noting that Alibaba and Xiaomi dominate the market in China and have sold the most smart speakers there. 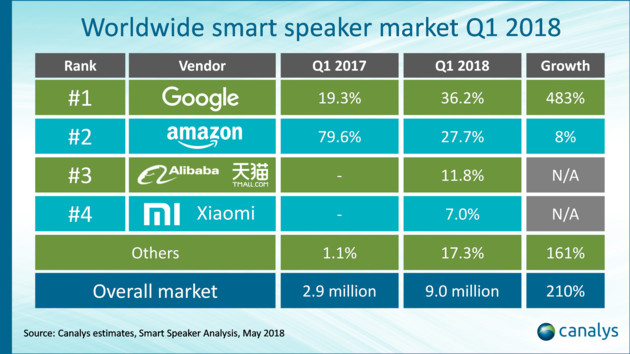 Xiaomi sold more than 600,000 Xiao-AI loudspeakers in China in Q1 2018. This is a big number keeping in mind these are sales for one country alone. Xiaomi is entering into different emerging markets at a rapid pace as we speak. It should be interesting to see what happens if these products become widely popular in the US and European markets as well.

What do you think about the Google Home and Amazon Echo? Which smart speaker do you use on a daily basis?