A brand-new point release for popular photo editing software GIMP has been released today, bringing GIMP to version 2.10.6 – this update doesn’t bring a whole load of significant features, but there are some great improvements and new functionalities.

For starters, GIMP 2.10.6 finally introduces support for vertical text (top to bottom), which has been a highly requested feature particularly for East-Asian writing systems. Thus, users can now set text in mixed orientation (as is typical in East-Asian vertical writing) or upright orientation (more common for Western vertical writing), with right-to-left, as well as left-to-right columns.

Two new filters are also introduced, which include “Little Planet” and “Long Shadow”. Little Planet takes 360×180 equirectangular panorama images and wraps them into a sphere, hence the name “Little Planet”, whereas Long Shadow is a new GEGL-based filter that simplifies creating long shadows in a few different visual styles.

As for users creating complex projects with many layers, GIMP 2.10.6 has improved the optimized drawable preview rendering. Most creators working on complex projects in GIMP have had bad days when there are many layers in a large image, and GIMP can’t keep up with scrolling the layers list or showing/hiding layers. The GIMP team has helped this a bit by having most drawable previews render asynchronously.

The only exception to that are layer groups. Rendering them asynchronously is still not possible, so until we deal with this too, we made it possible for you to disable rendering layer group previews completely. Head over to Preferences > Interface and tick off the respective checkbox.

File dialogs were also streamlined a bit (open, save, export, etc) – a common headache for users was the presence of two file format lists, one for displaying files with a specific extension, the other for the actual file format choice. There is just one list available now, and it works as both the filter for displayed images and the file format selector for the image you are about to save or export.

Additionally, a new checkbox allows you to display the full list of files, regardless of the currently chosen file format. This could be useful when you want to enforce an unusual file extension or reuse an existing file’s name by choosing it in the list and then appending your extension.

The issue of “DLL hell” has been addressed, which is mostly caused either by third-party software installing libraries in system folders or by third-party plug-ins installing themselves with shared libraries interfering with other plug-ins. GIMP 2.10.6 addresses this with an additional fix by taking into account 32-bit plug-ins running on 64-bit Windows systems.

There is a bit of work being done on babl, the library used by GIMP and GEGL to perform color conversions. GIMP and GEGL mainline versions may use babl for performing conversions between certain classes of color profiles, instead of relying solely on the LCMS library, greatly improving performance.

The process will have all image data carry around the information regarding its color profile internally. When properly handled by GEGL and GIMP, this allows babl to perform the right conversions at the right time, letting all image-processing operations be applied in the correct color space. 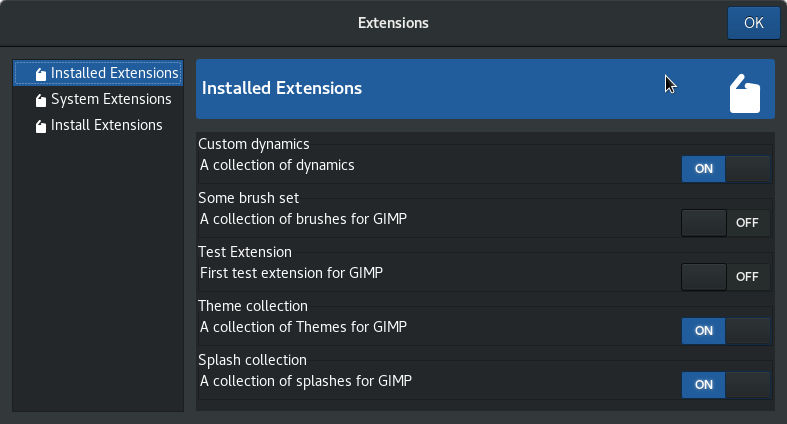 Finally, a public repository called GIMP Extensions has been getting some attention, which is a public repo for user-created extensions and can include things such as splash images, patterns, gradients, themes, etc. This will bring a kind of “search and click to install” extension management system to GIMP.