The Nvidia GTX 1050 3 GB was announced a few days back and now the GIGABYTE GTX 1050 3 GB is on the shelves if you are interested in buying one. The custom design will give you better thermals for when you are gaming. The card features a dual fan cooler and the iconic Black and Orange color scheme. The dual fans should be enough to keep those thermals in check.

The GIGABYTE GTX 1050 3 GB features 768 stream processors just like the 1050 Ti, and has a base clock of 1392 MHz and a boost clock of 1518 MHz. Although the capacity has been increased to 3GB GDDR5, as compared to the 2 GB model, the downside is that the memory bus is reduced to 96bit and the total bandwidth reduced to 84GB/s.

According to the specifications page, the card is not based on the 14nm process like you would expect but on the 16nm process instead. This could be some kind of a typo, or not. We will have to wait and see whether or not it is corrected in the future. 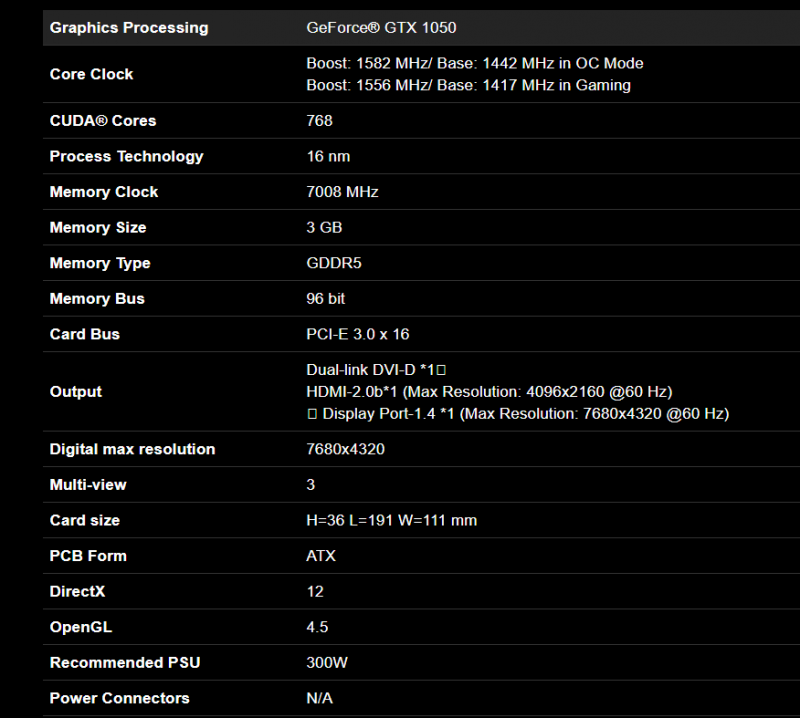 One of the major selling points of this graphics card is that it does not need any external power. It gets all the power it needs from the PCIe slot. If you have an older PC lying around that does not have a dedicated graphics card then you can easily install the GIGABYTE GTX 1050 3 GB inside and do some gaming on it. The GIGABYTE GTX 1050 3 GB is a perfectly capable gaming card and what you are getting for the money you spend is good value.

The graphics card does come with an additional GB of VRAM as compared to the 2 GB model and that should get you through the 2 GB buffer bottleneck. For an entry-level graphics card, the Nvidia GTX 1050 3 GB has plenty to offer. There will be custom variants from other AIB partners coming and we will let you know which one is the best. Stay tuned for more information regarding the Nvidia GTX 1050 3 GB and its different variants.

Let us know what you think about the GIGABYTE GTX 1050 3 GB and whether or not you are interested in getting one.