While the Titan V, the only available Volta card with the addition of Nvidia Quadro GV100 and the Tesla V100 which cost a fortune, might not be a gaming card, it still might be a glance into what the Volta architecture’s got in store for us, as opposed to Pascal in gaming. The point isn’t to look at raw performance in a hundred different titles, but to think of what the overall performance teaches us and what might eventually come with Volta cards.

This is a glance into the Volta architecture.

Volta, an Nvidia-developed GPU microarchitecture, succeeds Pascal and was announced as a future roadmap ambition in March 2013. But we haven’t really seen any real, GTX Volta gaming cards so far.

Nvidia Quadro and The Tesla V100 come at a very hefty price but they deliver impressive performance boost over Pascal even in gaming, which they are not designed for.

On one hand it’s currently not the best time to buy one of those if you’re a gamer, but on the other hand they let us see what we might expect in the future. The Titan V, latest released card from the Volta generation video cards, actually comes at a little bit more reasonable price of around £2,700.00, and it delivers a massive performance jump compared to any other card on the market in anything that is thrown at it. It is the no. 1 card on gpu.userbenchmark.com.

The important thing to keep in mind when thinking about Volta as well is that, there’s no rush from Nvidia, at least not from the marketing perspective. They have essentially cornerned the market with Pascal so that they don’t have to rush the release of their cards. AMD has been convincingly kicked back at Nvidia even with Pascal, whatever AMD released, even the VEGA series cards.

So let’s take a look at how roughly the Titan V performs in comparison to the best gaming graphics card out to date, the 1080Ti, its little brother Titan Xp, Nvidia Quadro and Vega FE – in terms of gaming

It scores suprisingly better in everything that is thrown at it. But you need to keep in mind that this is not a card designed specifically for gamers, both price and performance wise. Once again we need to remind ourselves that Titan V is not devised for gaming. And even though it’s three times the price of a 1080Ti, I think it’s justified.

It is the hands down best graphics card, but it should be noted that it should be compared more with cards designed for the same purpose, non-gaming, enourmous workloads, advanced AI computing, and GPU-deep learning tasks such as the Titan Xp, Nvidia Quadro, Vega FE and the Tesla V100 in benchmarks more suited for them. But it still beats any card out there in terms of gaming performance. 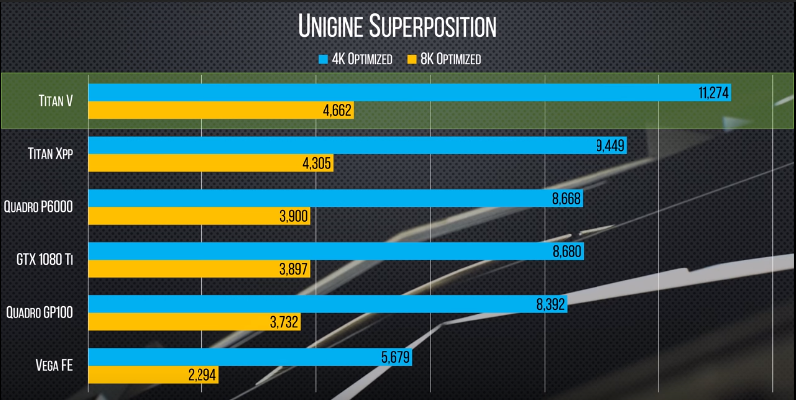 We can clearly see that Titan V still continues its domination over all other high-end cards, which is just an insight of what Volta might bring us in the future. It even manages to easily outperform the its direct Volta competetor in every aspect, easily claiming the title as the fastest video card to date.Now, to be fair, as we already mentioned Titan V is not a gaming card, so we should also take a look at some benchmarks in deep learning and AI.

With the addition on the new Tensor cores, alongside the classic CUDA cores that every GPU typically runs on, it should easily outperform CUDA core based graphics card since it has 5120 CUDA cores and a whapping 640 Tensor cores, compared with only 3840 CUDA cores for the Titan Xp and 2560 for the 1080Ti, with no Tensor cores.

And while we’re at it, Nvidia is also showing off with their HBM2 memory for the first time in a Titan series card.

But how big could actually Volta be? Seeing these raw numbers, Volta shows its superior capability in both gaming and Deep AI learning, which it is primarely designed for. But the real deal is when are the Geforce GTX series of Volta gen cards going to come out, and all we can do at the moment is speculate at how big of a performance jump we might be seeing. If you’re into 4K gaming, generally oversized monitors with the highest FPS possible, the Titan V might be for you, and it’s the only thing we’ve gotten from Volta so far.