Microsoft worked very hard on Windows Defender to turn the computer security application that most users ditched for third-party alternatives on older versions of Windows into the premier line of defense against viruses, malware and other external threats for all Windows 10 computers. However, it seems that Microsoft didn’t work on Windows Defender hard enough as Windows 10’s default security program has a significant number of flaws and susceptible to wide array of different issues. A widely undocumented problem that Windows Defender users are susceptible to on Windows 10 is one where affected users receive an error message containing error code 0x80070015 when they try to run a Custom Scan of their computer via Windows Defender.

Users affected by this issue have also reported Windows Defender spontaneously crashing as soon as an Offline Scan that they initiate finishes. Windows Defender is Windows 10’s only built-in defense against all kinds of external threats and invaders, and that is precisely why not being able to use Windows Defender to scan your computer is a pretty significant (but thankfully fixable) problem. The following are the most effective solutions that you can use to try and resolve this problem:

Once you have the latest definitions for Windows Defender, try running a Custom Scan using the program and see whether or not the issue persists.

Solution 3: Exclude any empty and/or non-existent drives from the Custom Scan

Users affected by this problem have reported a rather peculiar finding – when they try to run a Custom Scan, they see empty and/or non-existent drives in the list of drives to be included in the scan and if these drives are checked (and therefore included in the scan), they see an error message containing error code 0x80070015 and/or Windows Defender crashes during or after the scan. The consensus is that this is a bug, and an odd one at that.

Having empty and/or non-existent drives included in the Custom Scan you are trying to run on Windows Defender can lead to you seeing an error message containing error code 0x80070015. That being the case, if you see any empty and/or non-existent drives when trying to set up a Custom Scan, be sure to uncheck them and exclude them from the scan, and Windows Defender should be able to perform the scan successfully once it has been initiated. 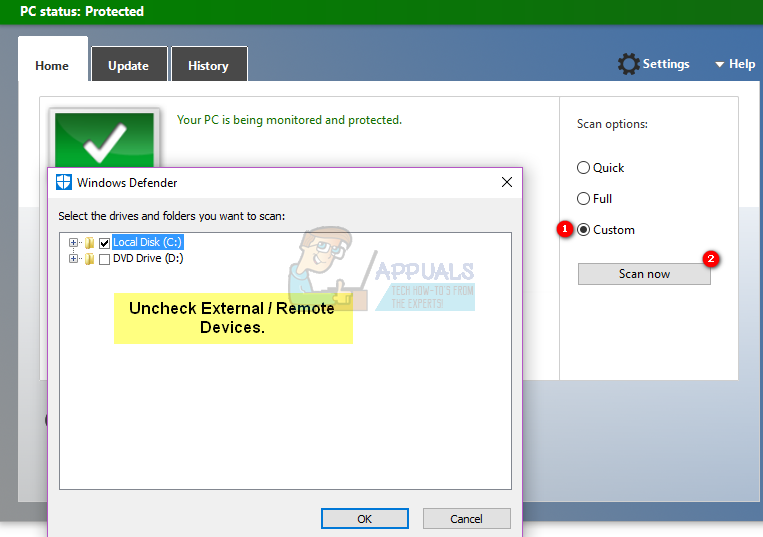