asmtxhci.sys is the driver for the ASMedia USB 3.x XHCI Controller. It manages your system’s USB 3.x ports, as well as all devices connected to them. ASMedia controllers are usually found on ASUS motherboards and laptops, especially on Intel’s chipsets.

If the controller happens to fail, it will happen when you have a USB device connected, and you will get a Blue Screen of Death, saying “SYSTEM_SERVICE_EXCEPTION (asmtxhci.sys)”. This means that you need to reboot your system and there is a problem with the drivers of ASMedia’s controller.

This may leave you stranded and without a device for quite some time if you don’t know how to fix it, so read on for a solution to this problem. 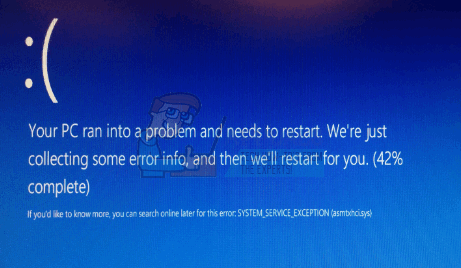 Update or replace the drivers

The solution for a malfunctioning driver is to update it to the latest version, hoping that the driver’s manufacturers are aware of the problem and have fixed it, or revert back to a more stable version that you know worked, in case you get the errors after an update of the drivers.

If you go for the first option, the first thing to do is to find the controller in the Device Manager. You can access the Device Manager by pressing the Start button on your keyboard, and typing Device Manager, then clicking on the result. When you’re presented with a list of devices connected to your device, and their respective drivers, you need to find the ASMedia XHCI controller. Since it’s a USB 3.x controller, you will find it at, or near the bottom of the list, by expanding the Universal Serial Bus controllers menu. Right-click it, and select Update Driver Software… from the dropdown menu. Follow the wizard, which will update the controller for you. Reboot your device when done, and it should be working properly.

Option 2: Replace the drivers with a stable version

If you know that you have updated your drivers and they’re misbehaving, you could always roll back to the previous stable version which you know worked. Do to this, you first need to download the stable version of the drivers, and then uninstall the unstable ones, before installing the new ones. For safety reasons, always download the drivers first, then uninstall the ones you don’t need.

As far as the ASMedia XHCI controller is concerned, if you have a laptop or similar device, you will find the drivers on the website of the laptop’s manufacturer. If you have a desktop, you need to look for the driver on the website of the manufacturer of your motherboard, since the controllers are on the motherboard itself. You need to know which exact version you are looking for, so see which one you have first, and see which one was released before it. You can find the current version when you find the controller in the Device Manager as described previously, but instead of Update Driver Software… on the dropdown menu, you will select Properties and see the version there. Download the previous version and proceed to the next step.

Once done downloading, you should uninstall the drivers. Locate them in the Device Manager, right-click and select Uninstall from the menu. When they’re done uninstalling, reboot your device. Now you should have Microsoft’s generic drivers, and you can install the stable ones. Navigate to your Downloads folder, or the place where you saved the drivers’ installation, and install the stable version. Reboot your device once again and it will work.

BSODs can be really frightening, especially to a non-tech-savvy user who doesn’t really know what he’s looking at. However, with a little know how and the methods we mentioned earlier, you will have absolutely no problems in solving the SYSTEM_SERVICE_EXCEPTION (asmtxhci.sys) error.