A common problem reported by users of both, the Acer Chromebook 13 and the HP Chromebook 14, is that Youtube videos at times appear highly pixelated, which makes them unwatchable. This blur effect on Youtube videos is known to occur in Chromebooks that run on the NVIDIA Tegra K1 chip, a list that includes both the Acer Chromebook 13 and the HP 14. The problem, it seems, is caused by Chrome OS hardware accelerating the videos, which is currently not very well compatible with the Tegra K1 processor.

This pixelization is not limited to Youtube. It also happens on local media players on these Chromebooks, including VLC and Google’s own video player for Chromebooks. In this tutorial, we will show you an easy fix so that this problem of pixelized videos never bothers you again.

In order to fix the pixelization problem on Chromebooks with the Tegra K1 chip, we will have to disable the automatic hardware acceleration on Chrome OS.

To do that, open Chrome, paste this address on the address bar and press enter – 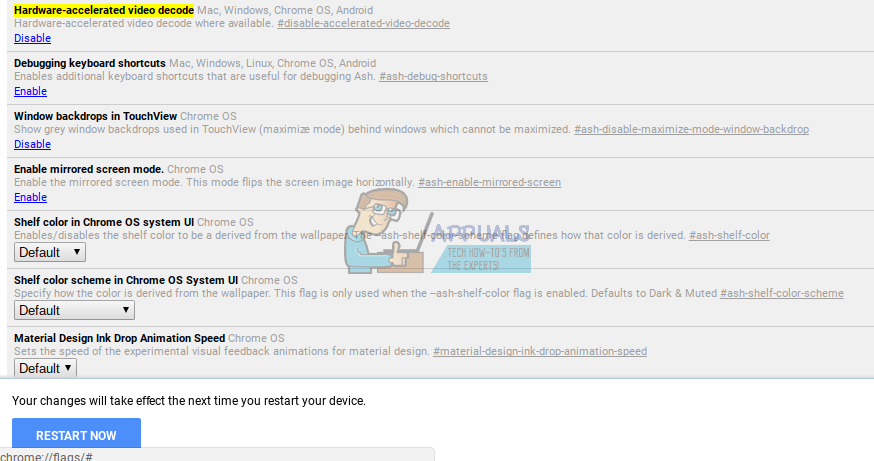 A list of settings will open up, with the ‘Hardware-accelerated video decode’ setting highlighted, as you can see from the screenshot above. Click ‘disable’ to disable hardware acceleration.

You will then be prompted to restart your Chromebook in order to apply the required changes. Once that is done, you should never encounter the problem of pixelated videos on your Chromebook.

This does mean, however, that Chrome OS will then rely only on the CPU for video playback without much GPU support. While that should not be a problem on lower resolutions, you might encounter some stuttering playing HD videos without hardware acceleration. This is not an unfixable issue, though. All you need to do is follow the steps in this article to remove stuttering on Youtube if you encounter any.