This is one of the most common problems that occurs with Laptops. There are several reasons but to rule out specific cause it has to be checked and all of the following methods must be attempted. You can stop at the method that works for you.

In this  guide, I will walk you through some methods to fix the issue. 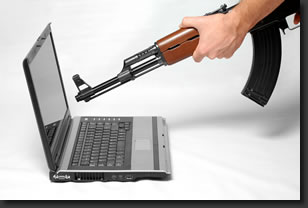 1. Take out the  battery, the charger and  any peripherals such as (USB devices, printers etc).

3. Put the charger back in and check if the laptop now powers up. If it does, then put the battery back in as well.

Method 2: Testing with Charger only after Releasing Saved Power

1. Remove everything from the laptop, including battery, charger and any peripherals connected.

2. Press and Hold the power button for 30 seconds.

3. Release the power button now and put only the charger into the charging socket/jack on the back of the laptop.

4. Make sure that the charger has power and is connected to the electrical outlet.

5. Press the  Power button on the laptop once to see if it turns on. If it does, then the battery has probably died.

1. If the laptop was exposed to water and you are trying to turn it on immediately after then STOP right here. This will short the motherboard or other internal hardware.

2. Keep the laptop open and exposed to SUN for at least 72 hours.

3. Test after 72 hours, if nothing happens then something internally has shorted which would need replacement.

Fix: Your Laptop Will Not Turn On