The error code 0x80073712 happens when the Component-Based Servicing manifest is corrupted. You will get this error and the update won’t install, and this happens on both Windows 10 Mobile, as well as on various versions of Windows for desktop.

The problem with Windows 10 Mobile doesn’t exclude anyone, it has happened for users with brand new phones which are meant to be immediately updated to newer builds, as well as some users who have tried updating via the Insider Program. It’s usually when you have an older build of Windows 10 Mobile, and you’re trying to update to the newest one, as users updating straight from Windows Phone 8.1 don’t seem to be having this issue.

There are a few things that can help you fix this issue, and they range from easy ones that won’t require much time, to some that will require both time and effort on your side, but you will be able to solve this issue no matter the time needed. 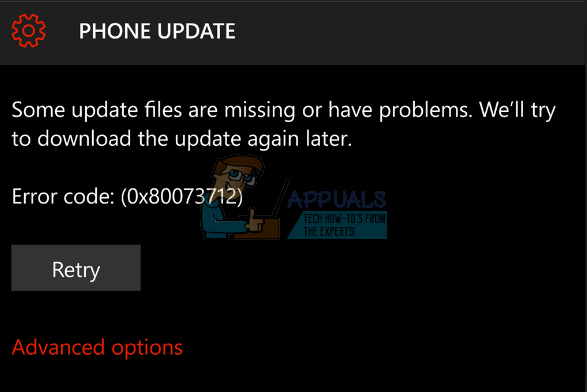 Some devices, such as the Lumia 950 and 950 XL, started getting firmware updates immediately after their release, and failing to have the newest firmware on your device might prevent you from proceeding with the updates.

Method 2: Run the update without an SD card

Having an SD card in your device while running an update can sometimes confuse your device, so you can try removing it while you’re installing the update.

Method 3: Roll back to 8.1, then install the update directly

As a last resort for users who come from devices that originally shipped with Windows 8.1, you can roll back to Windows 8.1, and then update to Windows 10 via the Insider Preview.

Windows 10, be it for phones or computers, has had its fair share of bugs and errors that still plague a number of users. However, if you follow the methods above, you will have your device running the latest build of Windows 10 Mobile in no time.